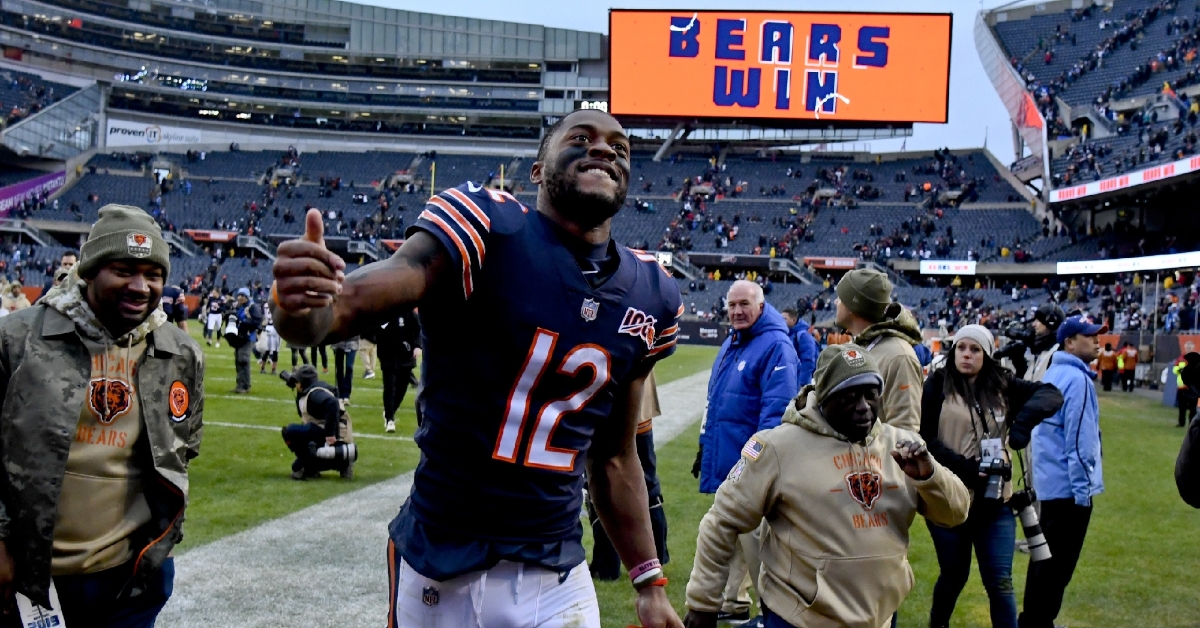 To become a great offense, you need to develop chemistry between your quarterback and wide receivers. While Mitch Trubisky had trust in his receivers, it never seemed like they had the chemistry to take that next step. Enter Nick Foles.

Through three games for Foles, when things are going well the offense is much more in tune to him. They seem to play better, or should I say more consistent when he is on the field. One of the reasons for that is that Allen Robinson continues to impress and is now drawing comparisons from Foles to a former Bears receiver.

Foles has now gone on record saying that Robinson plays a very similar game to that of Alshon Jeffrey, and that is a good thing. Robinson is a huge part of the Bears offense, but Jeffrey has been on of the most polarizing Bears players in recent memory.

During his time with Chicago, Jeffrey was paired with Brandon Marshall and the two of them gave defenses fits. Jeffrey possessed decent speed but used his height and leaping ability to snatch the ball from Jay Cutler, and Josh McCown to give defenses fits. Jeffrey had all the hype in the world, but when you add in his PED suspension and the inability to remain healthy Chicago had no choice but to let him walk.

This is where the Foles and Jeffrey connection come into play as he was sent to Philadelphia and joined forces with Foles for a couple of years. Even though Foles was not the starter the year Philadelphia won the Superbowl, they wouldn’t have won if it wasn’t for him and his play. He played his best football when it mattered and immediately formed an in-sync connection with Jeffrey. Across the regular season, Jeffrey was targeted 34 times by Foles hauling in 22 of those passes for 368 yards and two scores.

Switch to the post season, and Jeffrey was targeted even more seeing 35 passes head his way bringing in 23 of those for 364 yards and three scores. In total, Foles and Jeffrey hooked up for 45 receptions for 732 yards and five scores. That was all in less than 12 games, so the connection and chemistry is certainly there. Now that Foles is the man in charge in Chicago, he has a new cast of receivers he is looking to build chemistry with, and Robinson appears to be that guy now.

“Nick Foles is the best QB Allen Robinson has ever played with” pic.twitter.com/0onzChHVAA

I’m not saying this duo will put up the same kind of numbers that Foles and Jeffrey did, but the potential is there. Robinson is similar in body type but has proven to be far more durable. Robinson also has shown the ability to come down with 50-50 balls which Foles is certainly going to use to his advantage. Given that Foles took over in week three, he will have 13 games pending health to form a connection with Robinson.

That along is more games that what he had with Jeffrey and we saw the numbers those two put up. Robinson has shown the ability to be an elite receiver with Trubisky at the helm. Now with Foles, he will be looking to take his game to the next level and quite frankly he has all the tools and talent to do just that. For what it’s worth, Trubisky has all the tools to succeed, but he has never used Robinson the way he should.

Foles on the other hand has experience with a Robinson type receiver and the two of them are off to a great start together. So far, Foles owns a 113.3 passer rating when Targeting Robinson and has completed nearly 70% of passes his way. Robinson has brought in a pair of scores and 155 yards from Foles so the two of them are clicking early.

This would be his best stat line since his Pro Bowl season in 2015. pic.twitter.com/PZs89N1bYo

Jeffrey did a lot with Foles at the peak of his career, but Robinson can do them even better or produce even more. Robinson can haul in passes in traffic, catch jump balls, and is a better route runner although he lacks elite speed. That gives Foles more options with Robinson than he had with Jeffrey.

Robinson is the perfect Foles target and someone he is going to rely on a lot the remainder of the season. If the idea is to keep Robinson long term, the Bears may also have to look at holding onto Foles beyond this season if the numbers are good. You can always replace quarterbacks, but replacing chemistry is much tougher. Sometimes, you need to go with chemistry over skill set and Foles appears to have that working in his favor.