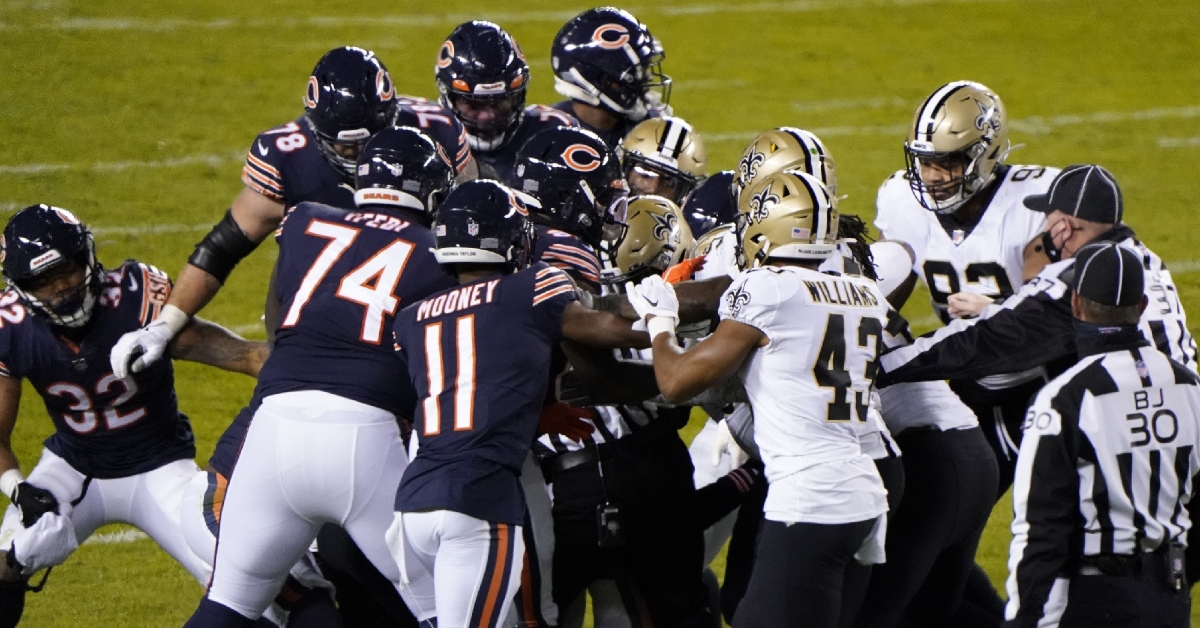 For the first time this season, the Bears dropped back to back contests as they fell to the Saints 26-23 in overtime. Don't let that score fool you; however, as for 55 minutes, their offense was once again painful to watch while the defense had to shoulder the load.

Nick Foles and the offense played ok during the first half but were flat out terrible in the second half until their final two drives, which led to 10 points. This has become a growing concern all season as the team seemingly has no answers for their offensive struggles. Some want to point out to lack of running game and poor play calling, but it all comes down to the offensive line as the Bears simply can't hold their own in the trenches.

This needs to change if the Bears expect to continue their strong start to the season as they are now 5-3 on the season and are falling further down the NFC playoff picture. With the Packers on a short week this week and a chance they could lose on Thursday, the Bears could find themselves in first place once again as they take the field in week 9. Here are some takeaways from this game.

A missed opportunity: Not only did the Bears have a chance to sweep the NFC South this season, but the Bears also missed a golden opportunity to retake the lead in the division and move back into the No. 2 seed. With the Packers falling to the Vikings earlier in the day, the Bears entered the game tied with Green Bay but held the lead over them with a tiebreaker.

Considering the Packers have a short week this week and very easily could fall to the 49ers, it was a chance for the Bears to not only retake first in the division but put some distance between them and the Packers by holding a one-game lead plus the tiebreaker. Instead, they are now a half-game back, and they are now behind the Saints in terms of playoff positioning and tiebreakers. The Saints lead the division, but tonight would once again be in second with a Tampa win.

Only four teams score fewer points per game than the Bears.

So of the five worst offenses in the sport, the Bears have the same number of wins as the other four combined.

This defense is the reason why.

The offensive line is terrible: As much as fans want to blame Nick Foles or Mitch Trubisky for their inconsistent play, it is not entirely their fault. Sure, the play-calling has been questionable, as have some of their decisions, but the offensive line needs to shoulder the blame. That is the weak link on this team, and it continues to show up every week.

That was on full display again yesterday when the Saints front seven manhandled the Bears line from start to finish, which left Foles uncomfortable all game. Foles could never settle into any sort of groove outside the first touchdown, and the last two drives and the offensive line are a big reason.

When you have little to no time to set your feet and throw, nothing good will come from it. Unlike Trubisky, Foles doesn't use his legs much, if at all, so he needs a little bit more time to throw in the pocket. I am not saying switching back to Trubisky is the answer, but the Bears should consider using him much like the Saints use Taysom Hill. Any sort of offensive spark is a good thing at this point.

RG: converted offensive tackle who has been the most penalized player in the NFL the last 4-5 years

The defense continues to step up: If it wasn't for the Bears defense early in the second half, this game could have been a blowout. With the offense struggling to move the ball and giving the Saints short fields, the defense was forced to work overtime and keep them out of the endzone.

For the most part, they did just that, giving the offense plenty of chances to put something together for the win. Unfortunately, you can only rely on your defense for so long as they do need help. They need time off the field, and they need a breather. When Chicago faces teams like the Saints or Packers with elite offenses, this is the result that will happen.

Khalil Mack countering with power & using the blocker to get a strip sack! #passrush #bears pic.twitter.com/RO0ibY0IKp

Chicago does have teams left on their schedule that they can rely on the defense to get the job done, but the longer this continues, the harder it will be to win games. Hopefully, when they reach their bye week in a couple of weeks, it will give the team a chance to figure things out for a strong finish to the season.