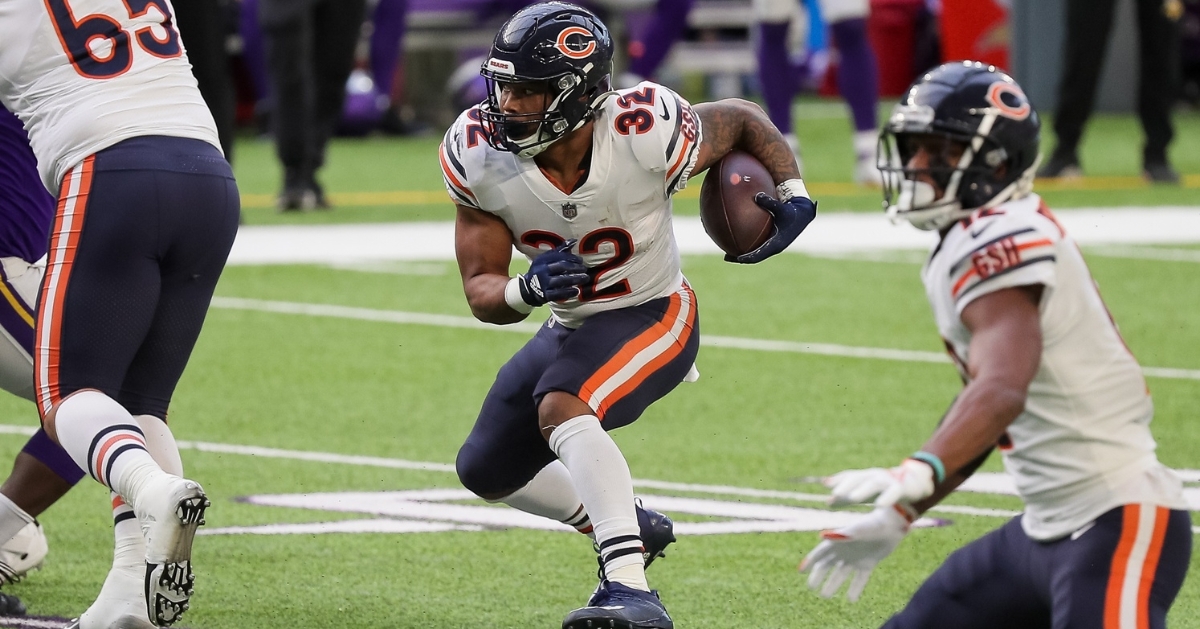 MINNEAPOLIS — Redeeming themselves from a woeful offensive performance against the Minnesota Vikings (6-8) earlier in the season, the Chicago Bears (7-7) upended the Vikings at U.S. Bank Stadium on Sunday. Quarterback Mitchell Trubisky, wide receiver Allen Robinson and, most of all, running back David Montgomery led the way for the Bears, who won 33-27 in the Week 15 matchup.

Montgomery received 32 carries and rushed for a career-high 146 yards. He also scored two rushing touchdowns for the Bears, with a Trubisky completion to Darnell Mooney serving as the other Chicago touchdown. Bears kicker Cairo Santos went 4-for-4 on field goal attempts, and the Bears, who have now scored at least 30 points in three consecutive games for the first time since 2013, never trailed on the afternoon.

Bears, punt: Hoping to avoid kicking to electrifying return man Cordarrelle Patterson, Dan Bailey opted for a short kickoff. However, Patterson received a lateral and reached the Chicago 39. The Bears were unable to take advantage of the good field position, though, as Trubisky was sacked to cap off a three-and-out.

Bears, touchdown: Montgomery broke off a 19-yard run on the first play of the drive. A 24-yard pass from Trubisky to Robinson was followed by Mooney catching a short pass and sprinting into the end zone for an eight-yard score.

Mitch ?? Mooney for the early strike!

Vikings, touchdown: Cousins completed a pass to Irv Smith Jr. that resulted in a gain of 21. Dalvin Cook notched a 13-yard carry, and Justin Jefferson hauled in a 23-yard pass. Cousins and Adam Thielen teamed up for a three-yard touchdown.

Bears, field goal: Trubisky completed 4-of-4 passes on the possession before throwing an incompletion on third down in Minnesota territory. Santos then connected on a 42-yard field goal.

Vikings, punt: The Vikings neared midfield before Robert Quinn forced a fumble on a strip sack. The Vikings recovered the fumble, and a punt ensued.

Bears, touchdown: Mooney picked up 16 yards on an end-around, and Jimmy Graham caught a 16-yard pass on the next play. Montgomery ran for 10 yards and nine yards on back-to-back rushes. He finished the drive off with a one-yard touchdown carry.

.@MontgomerDavid out here doin' his thing.

Vikings, turnover on downs: On fourth-and-1 at the Vikings' 34, Cook was stuffed at the line of scrimmage.

Bears, field goal: The Bears moved the chains once before stalling out inside the red zone. Santos proceeded to drill a 35-yarder.

Vikings, field goal: At the end of a drive that featured a 20-yard run by Cook, Smith dropped a surefire touchdown on third-and-goal from the 6-yard line. Smith's drop in the end zone led to a 24-yard field goal by Bailey.

Bears, end of half: A short carry by Montgomery ended the first half.

Vikings, touchdown: Cook recorded rushes of 18 yards and 11 yards. In between those two runs, Jefferson caught a 16-yard pass on a play featuring a roughing the passer call against Akiem Hicks. Cook scored on the ground from one yard out.

Came out of the half firing #Skol

Bears, touchdown: A 16-yard swing pass to Montgomery on third down moved the chains. Montgomery strung together multiple impressive runs during the drive. Trubisky completed a 13-yard pass to Anthony Miller. Soon afterward, Montgomery tabbed an 11-yard carry and, on the very next snap, powered into the end zone for a hard-fought 14-yard score.

Bears, interception: Robinson garnered a 35-yard reception, and a series of handoffs to Montgomery culminated in the Bears facing third-and-goal from the 6. Trubisky then committed his first significant mistake of the day by attempting a risky pass to the back of the end zone. Cam Dantzler, who was injured earlier in the drive but returned to the game, intercepted Trubisky.

Way to go get that, @camdantzler3!!

Vikings, turnover on downs: Following Cook getting shut down on third-and-1, Cousins settled for a desperation pass on fourth-and-1 that fell incomplete. The Bears' pass rush blew the play up and resulted in Chicago taking over at the Minnesota 29.

Bears, field goal: Three Montgomery carries were followed by Santos booting a 42-yarder through the uprights. The Vikings used their two remaining timeouts on the possession.

Vikings, interception: The Vikings began their final drive at their own 30 with 50 seconds to work with. After a replay review granted Jefferson a seven-yard completion, the Minnesota offense stood at the Chicago 33 with seven seconds remaining, setting the stage for a Hail Mary heave. On the final play of the game, Cousins' deep ball was batted into the air and picked off in the end zone by Sherrick McManis. With the win, the Bears moved one game above the Vikings in the standings and remained very much alive in the playoff push.

Up Next: The Bears will look to win their third straight when they take on the Jacksonville Jaguars (1-13) in Week 16. The Jaguars, whose lone win of the season came in Week 1, will host the Bears at TIAA Bank Field on Sunday, Dec. 27. Chicago leads Jacksonville 4-3 in the all-time series between the two but lost to the Jaguars 17-16 when last playing them in 2016. On what is expected to be a warm, sunny afternoon in Jacksonville, Fla., the contest will kick off at noon CST.