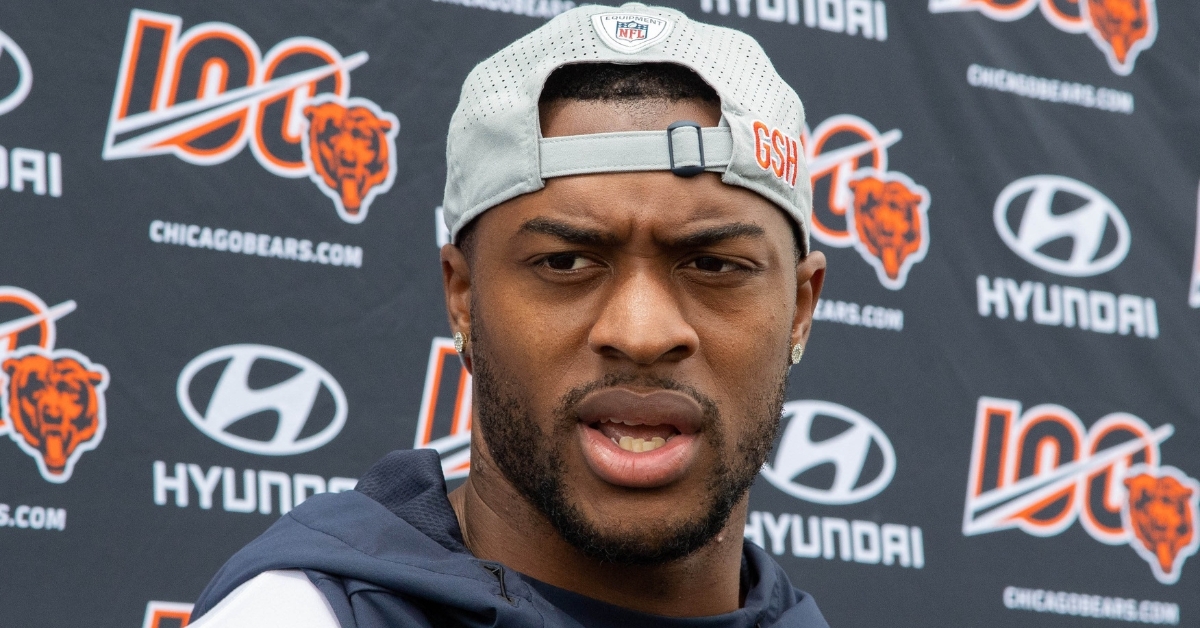 We continue to look at our season projection series as we shift to the wide receiver position. This will be an exciting skill position to watch, not just because of the Allen Robinson contract situation, but the other moving parts within the organization.

Darnell Mooney emerged as the team no. 2 option last year, and you have guys like Marquise Goodwin and Anthony Miller expected to battle it out for the No. 3 and No. 4 spots.

Add in a handful of other names who could see time on the field, and you are giving either Andy Dalton or Justin Fields plenty of weapons to play with this season.

ALLEN ROBINSON: The biggest question mark surrounding the Bears offense this season will be the contract status of Robinson. Not only is he playing this season under the franchise tag, but he doesn't expect a deal to get done before the season starts. That also leaves his future with the team in question, and losing him would be a big blow to this offense.

Since arriving in Chicago, Robinson has been as consistent as they come and have given the Bears their first elite receiver since Brandon Marshall and Alshon Jeffery. He is coming off a 1200 yard receiving season and had 1100 yards before that. In his three years in a Bears uniform, Robinson is averaging 1127 yards and nine touchdowns while also averaging close to 90 catches. His 102 catches last season was the sixth most in the NFL and second-most in team history.

Given that Dalton and Fields will be throwing passes this season, Bears fans shouldn't expect anything less than what they have seen from him the last two years. Hopefully, the Bears can figure out a way to keep him long-term.

Robinson continues to prove he is a legitimate No.1 receiver and will be playing for a contract extension either with the Bears or elsewhere this season. With that being said, expect him to go out and put up pro-bowl numbers once again, as he will be the focal point of the Bears passing game.

DARNELL MOONEY: One of the biggest steals of the 2020 NFL draft was the fifth-round receiver, Darnell Mooney. The rookie out of Tulane was a playmaker the moment he stepped on the field and emerged as the team's secondary option behind Robinson. After getting passed up through four rounds, the Bears traded up to get him in round five, and he rewarded them with big-time numbers.

As a rookie, Mooney hauled in 61 passes for 631 yards and four scores. A bit undersized for an outside receiver, Mooney uses his speed and route-running abilities to create separation and did a great job finding open space. He is just one of the many speedsters in fluxed into this offense that could be on the verge of turning the page.

Prediction: 16 games, 70 receptions, 697 yards, 5 TDS: Mooney will only get better each season he is on the field, but how much better remains to be the question. He will undoubtedly see more targets this season, but he may not get as many yards as you would expect. A big reason for that is the balance of receivers the Bears have in place, as I expect the ball to be spread around more this season.

Regardless if his numbers are a bit down or right around the same as they were as a rookie, Mooney will be counted on a lot this season, especially when you look at his production as a rookie. Hopefully, he can avoid the sophomore slump that some players go through.

MARQUISE GOODWIN: One of the main focuses for the Bears this offense was to add speed to their offense. That is precisely what they did when they brought in Goodwin, who tried out for the Olympic team this spring for the long jump. Goodwin has played in 75 games, 40 of which have been starts, and has shown plenty of potential.

He has hauled in 140 passes for 2323 yards and 13 scores while proving to be a big-time deep ball threat. If he can remain healthy this season which has always been a problem, he should have no trouble locking down the No.3 spot on this roster. This was a solid pickup for the Bears.

Prediction: 12 games, 45 catches, 712 yards, 6 TDS: Goodwin will have an opportunity to have a fantastic season if he can stay healthy. While I do think he stays primarily healthy, I am not willing to pencil him in for a full 16-game slate just yet. Look for him to be the Bears primary deep ball threat this season, which they haven't had in years. He has a chance to put up the second-best numbers on the team if he sees enough targets.

DAMIERE BYRD: Acquired this offseason also, Byrd spend time in the New England Patriots organization and will also bring his fair share of speed to the team. In 44 games, 20 starts, Byrd has hauled in 91 catches for just over 1000 yards and four scores. He is also one of the elite special teamers in the league, and he should see plenty of time in that role once again, with both Cordarrelle Patterson and Tarik Cohen no longer in that picture.

Byrd has never played an everyday role in an offense, but he will have a shot this season. He will have to beat out guys like Miller, Javon Wims, Riley Ridley, and injured Dazz Newsome should he want to hold on to that position. I like his chances early on.

Prediction: 16 games, 32 receptions, 548 yards, and two scores: Byrd is certainly going to get his chances at least early in the season, but he may not stick the entire season at the WR position. Given his value on special teams, I do feel the Bears move away from him and give guys like Miller, Wims, and Ridley more chances as the season goes on.

Still, Byrd will finish with the fourth-most yards on this team, whereas the other players fighting for playing may eclipse 600 yards combined. Either way, that is plenty of balance for a team eager to be better and more consistent offensively.