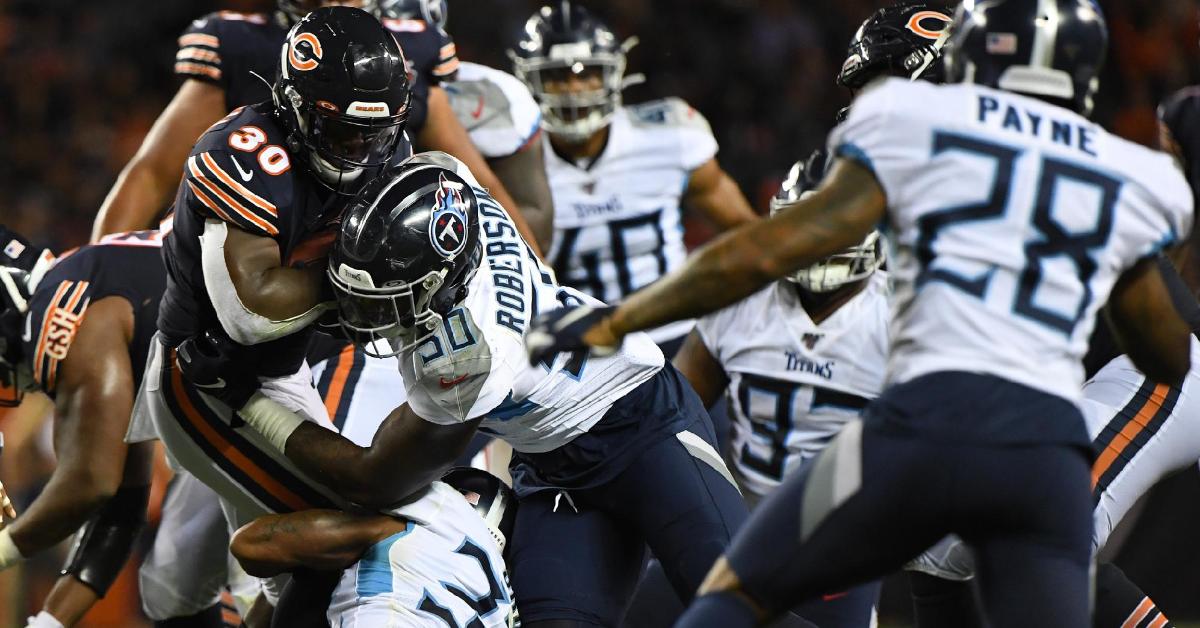 The Chicago Bears were edged out by the Tennessee Titans in a fairly uneventful preseason finale. (Credit: Mike DiNovo-USA TODAY Sports)

CHICAGO — Fitting with the common trend for Week 4 of the NFL preseason, the Chicago Bears (1-3) played very few notable players on Thursday night. Chicago fell to the Tennessee Titans (2-2) 19-15 at Soldier Field, with the Bears racking up 406 yards but punching it into the end zone just once. Looking to put a bow on his attempt to be named the starting kicker for the Bears, Eddy Pineiro went 3-for-3 on field-goal attempts. The Titans outscored the Bears 10-0 in the fourth quarter and were able to pull out a victory in the low-scoring affair.

Tyler Bray served as the Bears' quarterback from start to finish on Thursday, going 28-for-40 for 334 yards. The lone touchdown for the Bears came when Bray connected with tight end Jesper Horsted for an 8-yard score. Horsted finished with five receptions for 82 yards. Bears wide receiver Thomas Ives led all pass catchers in the contest with 99 yards on five catches. As for Pineiro, he missed the extra point that followed Horsted's touchdown but redeemed himself by drilling 32, 39 and 35-yard field goals, respectively, later in the game while dealing with 20-mile-per-hour wind.

Titans kicker Ryan Succop went 2-for-2 on field-goal tries, as he sent a 33-yarder and a 23-yarder through the uprights in the second half. The star of the game, however, was Titans running back Dalyn Dawkins. In addition to rushing for a game-high 117 yards on 13 carries, Dawkins caught two touchdown passes. Quarterback Logan Woodside manned the offense for the Titans, and he threw a pair of touchdown passes, both of which were caught by Dawkins.

With the Titans trailing 12-0, Dawkins hauled in a 9-yard touchdown reception at the 5:36 mark of the second quarter. Dawkins' second touchdown proved to be the winning score, as Dawkins recorded a 3-yard touchdown grab with 1:25 remaining, thus providing Tennessee with its first lead of the matchup. Although the windy conditions and the lack of scoring may not indicate as much, no turnovers took place in the preseason finale. In the Titans' 19-15 victory, Titans cornerback Kareem Orr led all defenders with 14 tackles, 13 of which were solo.