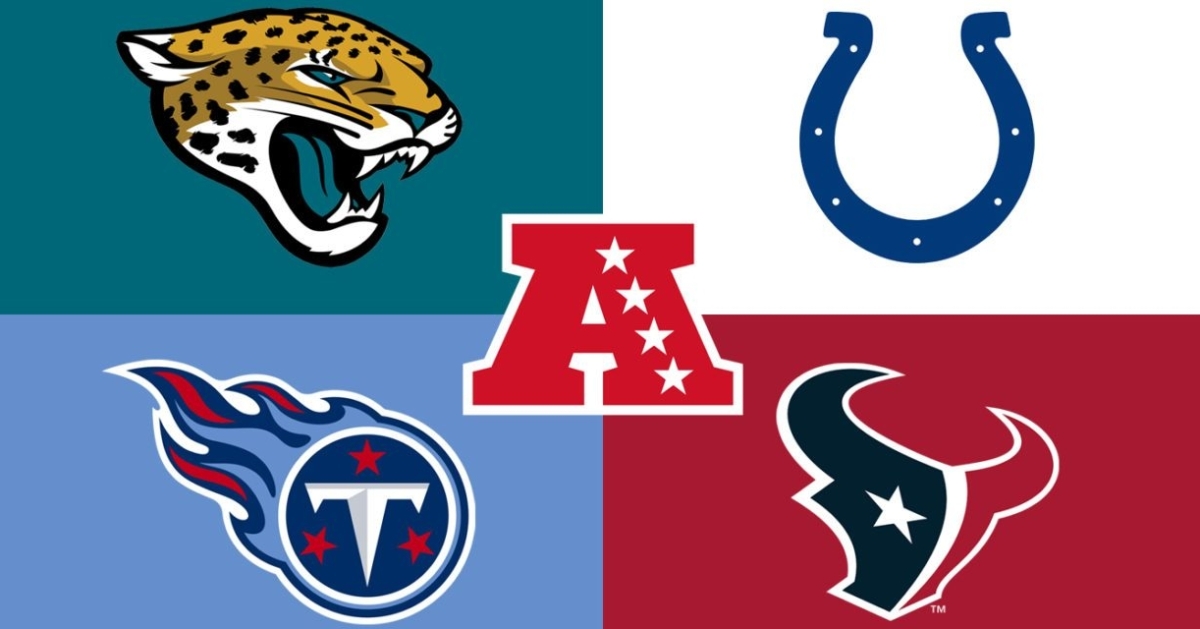 The youngest division in terms of franchise longevity is the AFC South. Not only do you have the youngest NFL franchise in the Houston Texans, but also another expansion team in the Jacksonville Jaguars who are reaching their 25th year anniversary this season. Add in the Titans, who may have been a franchise in Houston, but changed their name in the late 90’s and you only have the Colts who have been around for more than 50 years.

This is a division that hasn’t seen a ton of success with only the Colts and Titans tasting the Superbowl with the Colts earning the lone Superbowl title. This is also a division that the Bears not only see this season but have struggled with since the day it was formed.

HOUSTON TEXANS: The youngest of the NFL franchises, the Texans arrived in the NFL in 2002 and immediately took fans by storm. I will admit, this is my favorite team in the AFC as I am quite fond of some of their players. Although the Texans have not had a lot of post season success, they remain one of the better franchises in that division often competing for a divisional title on a yearly basis.

When it comes to how the Bears have fared against this team, it has not been pretty as the Bears have yet to beat Houston going 0-4 against them thus far. It took three years for the teams to first meet in 2004 when Houston made quick work of Chicago 24-5. That was just the beginning as the Texans had no idea, they would go nearly 18 years without losing to the Bears.

In their last meeting in 2016, Chicago traveled to Houston hoping to knock off a good Texans team. Despite a great game from Alshon Jeffrey, the Bears offense was unable to get things rolling falling to Houston 23-14 to drop to 0-4 against the Texans.

JACKSONVILLE JAGUARS: Unlike their lack of success against Houston, the Bears have fared much better against the Jaguars although Jacksonville has still matched up well against them. As of today, Chicago holds a narrow 4-3 lead as they will be looking for win No. 5 this season.

In the teams inaugural meeting in 1995, Chicago got all they could handle from a Tom Coughlin team that really surprised that season. In the end it was the Bears holding on for the 30-27 win, but Jacksonville walked away with the more impressive showing. After splitting the first four games of the series, Chicago went on to win the next two including their last win against Jacksonville 41-3 in 2012.

That win seems like eons ago as Jacksonville managed to take the last meeting in 2016 17-16 at Soldier Field. That win marked the first time the Jaguars were able to win at Soldier field since 1998 and brought things nearly back to .500 in the series.

TENNESSEE TITANS: Not only do the Bears see Tennessee in the regular season this year, but they are scheduled to see them the final preseason game should their be a preseason this year. This is another team that Chicago has had a tough time against, going 6-6 against them as a franchise. The teams first met in 1973 when the Titans were known as the Houston Oilers. Chicago jumped all over Houston handing them a 35-14 loss.

The two teams have managed to split the last four meetings, with Tennessee winning the last meeting against the Bears in 2016 by a score of 27-21 for the second consecutive win at Soldier Field. The Bears last beat Tennessee in 2012 51-20 as that was part of an impressive season in Chicago.

INDIANAPOLIS COLTS: The longest tenured franchise in the AFC South, the Colts have also had their fair share of success against the Bears as Chicago is just 19-24 all time. This was a series that dates all the way back to 1953 when the then Baltimore Colts took the first 13-9 and then won again later that year. Following those losses, the Bears won three of the next four and the teams were sitting at 4-4 through eight meetings.

The Colts responded by winning the next four games and seven of eight to take control of the series, but once we reached the 1960’s the Bears got something going. Not only did the Bears win seven of the next 10, but six in a row at one point which was their longest winning streak in the series. The Colts then went on to win 10 of the next 12 including a seven-game winning streak that lasted from 1966-1983.

It was in 1985 when the Bears won again, as they would take the next four meetings and didn’t lose until the turn of the new Millennium. Chicago has battled back in the last five meetings since 2000, going 2-3 in those five games including a hard fought 29-23 loss in the teams last meeting in 2012. The Bears last win against the Colts came in 2012 when they were able to nearly double Indianapolis by a score of 41-21 in front of the home crowd.

Overall record 29-37: The Bears have not fared too well against this division posting only a winning record against Jacksonville. You could make the argument that they have a winning record against Tennessee since their move from Houston, but in terms of one franchise the Bears struggle against this division. Those struggles went full circle in 2016 when they went 0-4 against the AFC south that season after going 4-0 against them in 2012. With Chicago set to see this division again this year it will be interesting to see what Bears team shows up and how they do.