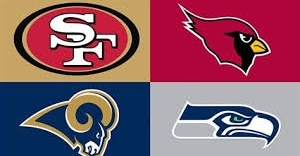 If you look at the NFC landscape as a whole right now, the NFC West might be the toughest division in the league. From the 49ers and Rams who represented the NFC in the Superbowl the past two seasons to the Seahawks who are annual Superbowl contenders, even the Cardinals have had some success in the past, and you can see why this division is so loaded top to bottom. Here is how the Bears stack up against this division all time.

SEATTLE SEAHAWKS: Whether you love them or hate them, you have to respect the Seahawks as a franchise and what they have accomplished over the last decade. Whether it was taking a chance on Russell Wilson or counting on fifth and sixth rounders to create the Legion of Boom, the Seahawks built an impressive organization the way most teams envy of.

For the Bears, they have had some slight success against the Northwest team, but still have a losing mark of 7-11 against them. The teams first met in 1976 with the Bears winning 34-7, but then it was all Seattle with the Seahawks winning four straight and six of the next seven overall. Since 2006, the teams have posted a .500 mark against each other going 5-5 over that span.

That includes a two-game winning streak by the Bears in 2006 and 2007 and a three-game winning streak from Seattle from 2011-15. The last teams these teams met up in 2018, the Bears managed to pick up the victory, topping Wilson and the gang 24-17 at home. That was their first win against Seattle at Soldier field since 2011.

LOS ANGELES RAMS: Whether it be the Los Angeles Rams of new and old or the St. Louis Rams, the Bears have no problem handling this franchise over the years. To this date, Chicago owns a commanding 54-37-3 lead in the series with these two teams set to face off again this season in late October.

No matter how good or bad the Rams franchise has been, Chicago has always seemed to have their number, which goes back to their first meeting in 1937 when the Bears knocked off the then Cleveland Rams 20-2. That was the start of early domination as the teams split the first four meetings before the Bears ripped off eight straight victories.

Eventually, those long winning streaks would come to an end, and once the team moved to St. Louis, you saw much more consistent play, especially during their greatest show on turf Superbowl teams. Fast forward to Los Angeles part two, and the teams have gone 1-1 since the Rams returned to Orange County, with the Rams winning last seasons meeting 17-7 at home and the Bears winning 15-6 at home in 2018. Let's see what 2020 has in store for both teams.

ARIZONA CARDINALS: Despite being one of the oldest franchises in the game, the Arizona Cardinals haven't had much success outside their lone Superbowl appearance, which resulted in a loss. Chicago has reaped the success of the franchise that seems to have a lack of consistent direction as they have owned the series with a 57-28-6 mark. Despite losing the teams first-ever meeting 7-6 in 1920 and losing three of the first four with a tie, the Bears have been nothing short of dominant ever since.

Chicago had their fair share of mini win streaks during this series, but none was more impressive than the run they put together from 1930-1936. During that time, the Bears failed to lose any of their 15 meetings, winning 13 of them and tying the other two. That was the turning point in the series as the Bears followed up with 13 wins in 15 games again.

Since the new Millennium, the two teams haven't met a ton, but Chicago still has the upper hand 5-2 during that stretch. That includes a three-game winning streak from 2001-2006 as the teams have split the last four against each other. Fortunately for the Bears, they were able to hold on in the team's last meeting as they stopped an inspired Cardinals team 16-14 in 2018.

SAN FRANCISCO 49ERS: No one will argue that the most successful team all-time in this division is the 49ers. Not only have they been to two Superbowl's in the past decade, but they have been to seven all-time winning the first five they ever played in with the combination of Joe Montana and Steve Young running the show. For some reason, Chicago matches up very well against this group as the 49ers have the series lead by a slim 34-32-1 margin.

The Bears won the first meeting 32-20 in 1950, but they won the first three before the 49ers got on the board. Once that happened, the teams began to split most of their meetings for quite some time until the 49ers won six-straight from 1969-1975. The Bears answered that skid with a three-game winning streak, but once the Superbowl years began to start, the Bears still managed to play hard despite another six-game skid to the men in red and gold.

Chicago has fared well against this team as of late, winning three of the last five and six of the previous ten meetings overall. In their last meeting in 2018, it was all about defense as the Bears slugged it out against Kyle Shanahan's group for the 14-9 victory. Chicago finished the season a perfect 4-0 against the NFC West that season which was a rare feat.

Overall record 148-110-10: The numbers speak for themselves; the Bears have had tons of success in this division despite just a winning record against two of the four teams. The two teams they have losing records too shouldn't be a surprise as they have had the most success in that division all time. Regardless, the Bears have done a good job keeping things close in most games and have a shot to pull to .500 against all four teams in the years to come.