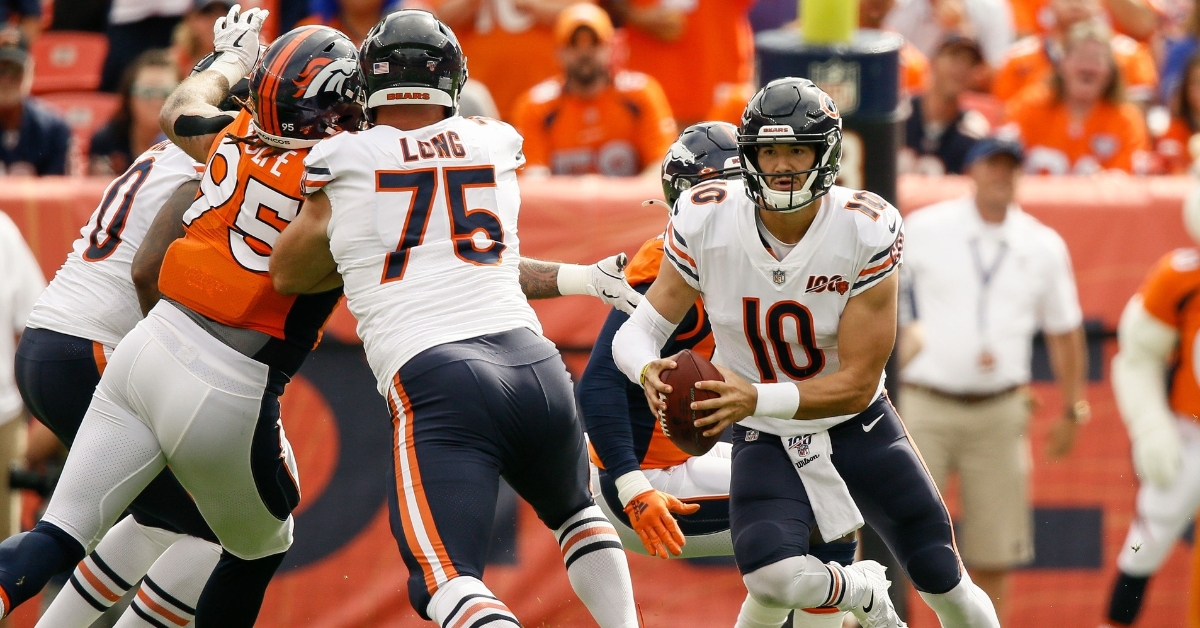 A lot of the 2019 focus for the Chicago Bears has been on the offense thus far or should we say lack of offense thus far. The criticism they have received through two weeks is well deserved as they continue to rank near the bottom in every statistical category.

Some have pointed the blame to Head Coach Matt Nagy and his play calling. Others have thrown Mitch Trubisky under the bus and are ready to cut ties with him. Whatever way your feelings lie, you have a legitimate case as to what the issues truly may be. However, how much of their early-season struggles have fallen on the coaches and quarterback. Could the offensive line play be the main reason as to why the offense has looked sluggish so far this season?

After keeping Trubisky upright for much of the season last year, the Bears offensive line has not been able to do that in the early portion of 2019. That has prevented the running game from getting going and has halted a passing game to throw the Bears offense off rhythm. With Nagy looking for rhythm on offense the rest of the season, he knows the offensive line play needs to be better. Kyle Long fully agrees with that and wants fans to know that their early-season struggles are certainly fixable.

Despite the offense struggling through two games, the offensive line still has plenty of positives that they want the fans to look at. For starters, the line is filled with a bunch of veterans that have played together for multiple seasons. The second thing they want fans to know is that they did improve in pass protection from week one to week two as Denver came away without a single sack last Sunday. They also managed to get through the game without a single false start penalty which helped the Bears move the ball late.

Even with the drastic improvement from one game to the next, things still didn’t seem to be in rhythm as the Bears know they still have a ton of work to do on the line. One defining stat that could be a clear indication as to why Trubisky has looked bad his first two games is the overall pass protection he has gotten from his line. Last season, the Bears ranked seventh in the league in pass protection which allowed Trubisky to get comfortable with the flow of the game.

This season through two weeks, that same unit ranks 20th which is not a spot you want to anyone ranked. With all five players back from last season on the line, they expect to get better each week. In return, the Bears should find that they are holding the pocket longer, creating better running lanes, and finding a way to avoid penalties. All of that will help the offense find the rhythm they desperately need moving forward.

If the Bears want to continue to improve all they must do is look at the film from this week and see what worked well on offense. Against Denver, Nagy put together a game plan that emphasized quick throws helping neutralize the pass rush from both Von Miller and Bradley Chubb. To help offset that pass rush, the Bears often used an extra TE or RB to help I pass protection situations, but the line did their part and played some of their best ball to date.

Charles Leno Jr was the one guy that seemed to benefit the most from the game plan Nagy drew up. After costing his teams some drives with costly mental mistakes against the packers, Leno was able to hold his own against the Broncos pass rush and avoided the penalty flag that hampered him in past games.

With the NFL emphasizing Holding calls on the offensive line, the referees responded by calling holding 74 times in week two more than any week in the last ten years. Leno was called for holding just one in the game but added an illegal use of the hands-on the same drive-killing a possible scoring chance for Chicago. It was the second week in a row that Leno has been called for those penalties, and both times it managed to prevent what looked to be a promising drive.

Obviously, at this point in the season, there is a lot of time to get things right, and ideally, you want each unit to improve from one game to the next. Sometimes, it isn’t about the unit improving as much as it is individuals developing. If every player can limit their mistakes individually, then the overall play of the entire group will become better, creating a much better flow during the season.