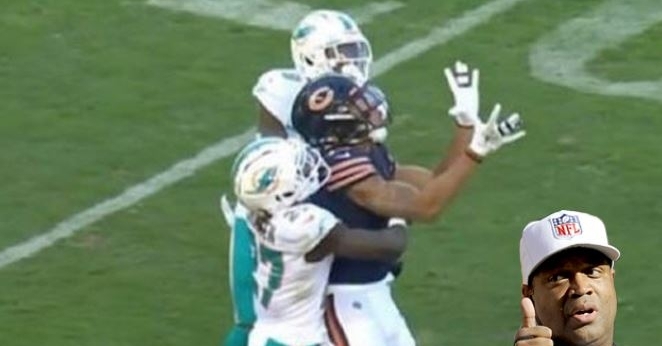 Social media has been on fire since the Bears lost to the Dolphins over two controversial calls that went against the home team.

One was the passing interference call on Eddie Jackson late in the contest and the other one was the no-call when Chase Claypool was mugged by a defensive back on the final drive, but the refs didn't call anything.

Bears head coach Matt Eberflus was asked about this assessment of the ref's calls late in the game and disagreed with their judgment.

“Obviously, the whole stadium saw the tug and all that before the ball came in there, so that’s what our opinion is,” Eberflus said during the presser. “But again, it was their opinion, and they didn’t throw the flag. We thought it should’ve been a flag. And that’s the way it is.”

Jackson also talked about his viewpoint on the call that went against him in the fourth quarter.

“Play the ball, try to turn into a receiver, as we’re taught as DBs,” Jackson said after the game. “So as I’m playing the ball, I’m thinking I’m there and I feel the guy hit me, so it’s like I don't know what they’re calling. I thought it was offensive PI, then the ref called it on me. So I turned to him and said, ‘Yo, how is that a flag?’ He said he didn’t see me playing the ball.

“Eddie played that really nice,” Eberflus said. “I thought he had a good — I can’t really coach him up any better than that, because he turned back for the ball, he’s got a right to play the ball, and he did play ball. And it was their opinion that that was defensive pass interference and they called it. Again, that’s their opinion.”