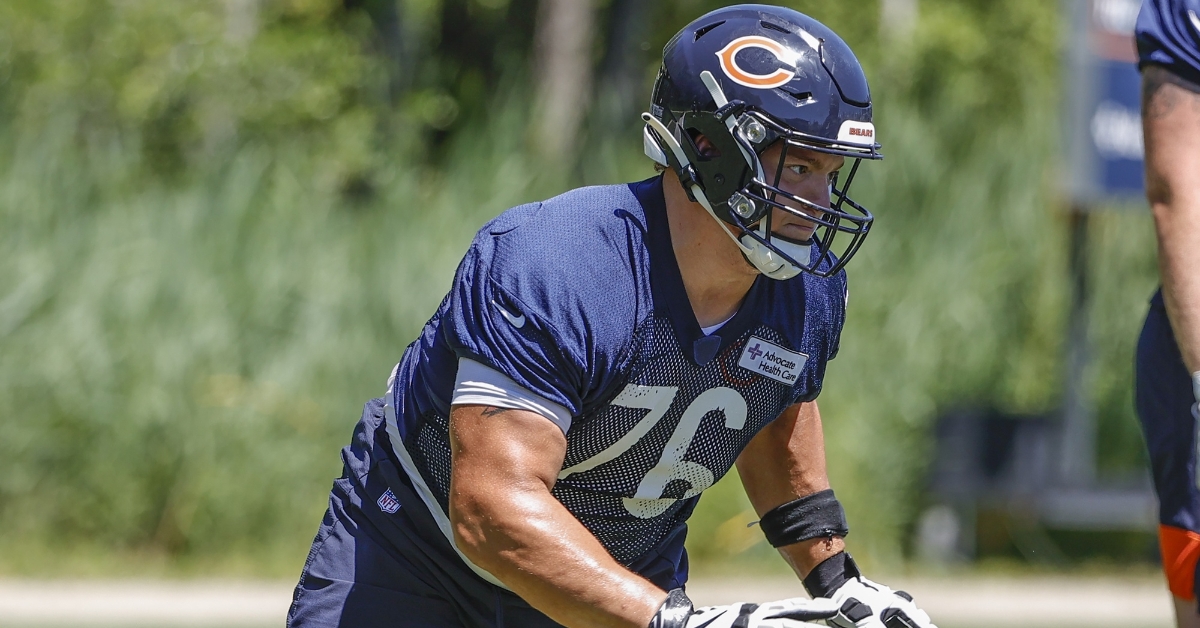 The Bears have had one massive issue they can't seem to address for the past several seasons. That issue falls on the offensive line as they haven't been able to address that under Ryan Pace. Not only is the offensive line critical to the running game, but it is essential to protecting the QB and helping them develop into the franchise leader they expect.

With Pace now out, new Bears GM Ryan Poles has made it a point that he will address the offensive line this offseason. Coming from Kansas City, Poles knows what a make-shift offensive looks like and how much it can affect a QB as great as Patrick Mahomes. No one will compare Justin Fields to Mahomes, but the bottom line is that even the most gifted Qbs in this league will struggle with no offensive line.

Although the offensive line still wasn't great this season, there were plenty of improvements which is going to go a long way. A big reason for those improvements was a pair of rookies thrust into action and several players who started to figure out things within the Matt Nagy blocking scheme. As things sit right now, Chicago will be in the market for at least one if not two offensive linemen this offseason as they look to put the correct pieces around Fields.

Offensive Tackles Unlike regular position players who are graded on stats, you can't do that with offensive linemen, so they get graded more on performance than anything. For the Bears, Jason Peters, Elijah Wilkinson, and rookies Larry Borom and Teven Jenkins saw most of the action last season as the Bears needed to improve that aspect of their game.

Peters was brought in to not only solidify one of those tackle positions, but to bring in veteran leadership that you can't teach. The future Hall of Famer had his moments, but you could see age catching up to him as the season went on. Not only was he getting beat off the line, but injuries forced him to miss a few games, which is when Wilkinson stepped in.

You had a pair of rookies in Jenkins and Borom that showed tons of promise on the other side of things. For Jenkins, his play on the field was limited as he was dealing with a back injury most of the season. On the other hand, Borom saw most of his action in the final six weeks of the season and looked the part of an everyday tackle in this league.

Grade C+: Addressing the tackle position will be a focus by Poles this offseason, but not a big one. If Jenkins is healthy, he will start at one of those spots, while Borom could take the other spot very quickly. That would leave Poles to find some depth behind his two young guns as they could be the cornerstone to the Bears offensive line for years to come.

Offensive Guards: Unlike the tackle position that needed a ton of work, the Bears were pretty solid at offensive guard and have been the last few years. Germain Ifedi and James Daniels are the most prominent names, but Alex Bars and Dieter Eisenlen saw action as depth pieces. For Ifedi, he signed as a free agent in 2020 and played well enough that the Bears brought him back again.

Daniels is often overlooked across the Bears line, but some would argue that he has been the most consistent piece on the line. He wouldn't disappoint, and he will again look to anchor down the interior portion of the line should Chicago retain him with this new regime. If your line is playing with consistency, the results and performance from the offense will follow.

As you can see, the offense wasn't consistent and hasn't been consistent for years. That falls on the offensive line and their inconsistency to get things done. Daniels is one of the names that shouldn't be mentioned in this area as he has consistently stayed healthy and has done his job when on the field.

Season Grade B: While the tackle position still needs a little work, the interior of the Bears offensive line is in much better shape. Sure, the guards didn't hold up that well against the run, but they did their job in the passing game to protect their QB.

For Chicago to take that next step as an offense, the guards will have to get better in running blocking. Games are won and lost in the trenches, and

the Bears need to do a much better job of winning inside the trenches when it matters.

Center: Perhaps the most critical position on the offensive line falls on the center. Not only are you the middle and anchor of the line, but you need to be on the same page as the QB, knowing that you snap him the football. For the Bears, they have one of the more underrated centers in the game as Cody Whitehair is the starter, with Sam Mustipher serving as his backup.

Mustipher saw some action at center, but it was few and far between as he bounced around to play other positions on the line. Whitehair not only played the most snaps on the offensive line this season, but continues to show he is one of the more valued pieces on the line.

Over the past three seasons, the Bears offensive line has gone through their share of turnover, but Whitehair remains in the picture. The main reason for that has been his play, and the Bears have benefitted from him staying healthy and showing up. Originally drafted to play guard, Chicago moved him back to his natural position in 2018, and that has been a career-changing move.

Season Grade B+: There are not too many positives to take away from the Bears offensive line, but Whitehair under center is one of them. If the rest of the offensive line could play to Whitehair's level, you would have a top 10 unit, and this offense would look more explosive than it is now. He is the one guy that this team needs to extend to make sure he remains in Chicago for a long time.