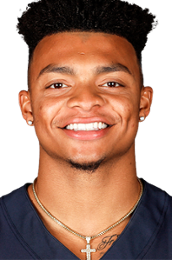 Quarterback
B I O
PRO CAREER:

A 6-3, 227-pounder, Fields comes to Chicago following a two-year stay in Columbus where he compiled a 20-2 record as a starter while completing 396-of-579 passing attempts for 5,373 yards with 63 touchdowns. He earned Big Ten Offensive Player of the Year honors after both of his seasons as a Buckeye while leading Ohio State to two Big Ten Championships and two College Football Playoff appearances.

Had one of the greatest statistical seasons in the history of Ohio State football as a first-year starter in 2019 when he completed 67.2 percent of his passes for 3,273 yards while accounting for 51 touchdowns (41 passing, 10 rushing)
Became the first quarterback in Big Ten history with 40 passing TDs and 10 rushing TDs in the same season
His 41-3 touchdown-to-interception ratio was the best in the country
Had a passer efficiency rating of 181.43, which was third-best nationally
Most Valuable Player of the Big Ten Championship Game after throwing for 299 yards and three touchdowns in a 34-21 come-from-behind victory over No. 8 Wisconsin
One week prior, threw for 302 yards and four touchdowns in a 56-27 win at No. 10 Michigan
Had several impressive national rankings: finished No. 3 in touchdown passes (41), total touchdowns (51) and passer efficiency (181.43) and No. 11 in completion percentage (.672)
In six games against teams ranked in the final College Football Playoff poll, accounted for 17 touchdowns and averaged 280 yards per game of total offense
Named a "champion" by the Ohio State coaching staff nine times and was the Offensive Player of the Game following wins over Florida Atlantic, Indiana, Northwestern and Rutgers
Accounted for multiple touchdowns in 13 of Ohio State's 14 games
Became just the third Ohio State quarterback in the last 50 years – Rex Kern and Craig Krenzel are the others – to win each of his first 13 games as the Buckeyes' starting QB
Member of the 2020 Davey O'Brien Award Preseason Watch List
Enrolled at Ohio State is January of 2019 after spending his freshmen season at the University of Georgia