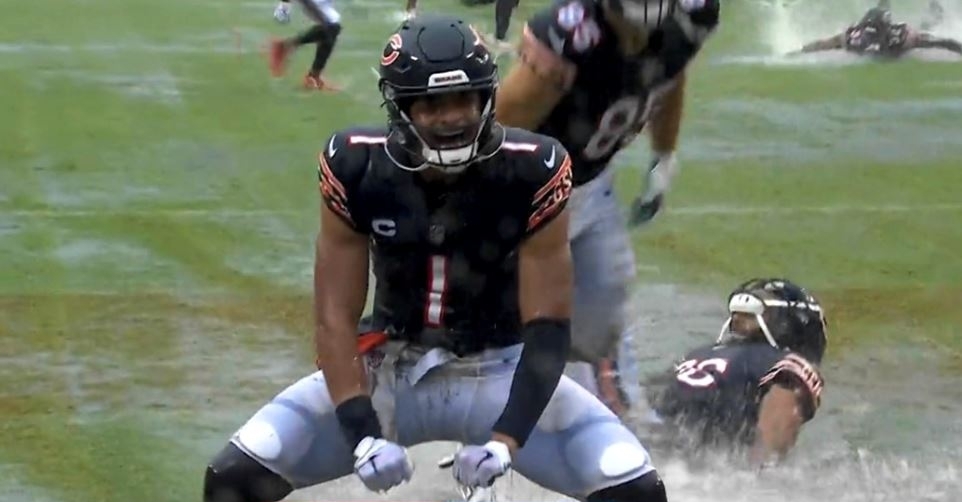 Fields was excited to get the win over the 49ers

CHICAGO - On a cool and rainy afternoon at Soldier Field in Chicago, the Chicago Bears (1-0) kicked off their 2022 NFL season by hosting the San Francisco 49ers (0-1). In the first of what is hopefully a long tenure as an NFL Head Coach, Matt Eberflus found out the hard way that being a head coach comes with ups and downs.

Throughout the first half, the Bears were next to non-existent in the first half as Justin Fields threw for just 19 yards while the Bears offense couldn't generate anything. Had it not been for their defense that kept them in the game, who knows what things could have been?

Well, that is why they play two halves of football, and the Chicago Bears looked like a completely different team in the second half. After falling behind 10-0, Fields did what Fields does and made something happen out of nothing, which led to the Bears first touchdown of 2022. That was the play they needed as Chicago ended the game with 19 unanswered points to pick up the 19-10 win.

Throughout the early stages of the first half, you could see those first game jitters as neither team was on their game early. The weather could have played a role, but that is no excuse. With the Bears punting on their first possession, their defense made the game's first play, forcing a fumble by Deebo Samuel with the rookie Jaquon Brisker recovering inside their own 20.

Several plays into their next drive, Fields made his first mistake of the afternoon as he threw a terrible interception to give the ball right back to the 49ers. Fortunately, the Bears defense stepped up again as 32 yards of offense came between the two sides on the following four possessions, which led to four punts.

As the second quarter was in full swing, the San Francisco offense started to look like the offense everyone expected, with Trey Lance beginning to come into his own. A nice run by Elijah Mitchell started things off before Lance found Ray Ray McCloud for an excellent 20-yard strike. Several runs from Mitchell and Lance later, and the 49ers offense was set up inside the 10, where Samuel finished things off from six yards out for the game's first score.

That would be the only score of the first half, with the final three drives resulting in punts and the 49ers holding a 7-0 halftime lead. As the second half started, it looked as if the 49ers were going to pull away as Lance orchestrated an 11-play 68-yard drive. Samuel started things off with another run, but it was the 44 -yard bomb from Lance that put the ball inside the Bears 20. Chicago would tighten up defensively and hold the 49ers to a Robbie Gould field goal, but they still trailed 10-0.

With the Bears offense in desperate need of a big play, they were hoping David Montgomery would get something going on the ground. That was not the case against the 49ers front seven, as they made things difficult to run against. After Fields threw a near interception on the far side of the field, he used a busted play to pick up the Bears first score of the game.

As the 49ers continued to pressure Fields, he escaped the pocket to find space, where he then threw all the across the field to a wide-open Dante Pettis. Pettis did the rest by racing into the endzone as his first catch as a Bear goes for a 51-yard score to bring Chicago within 10-7. That appeared to be the momentum swing the Bears needed as their defense was all over Lance for the rest of the game.

Following another punt that gave the ball back to Chicago, Fields was making something happen again as he found Byron Pringle down the sidelines for 22 yards and another first down. That is when the Bears went back to the run game, where although yards were tough to come by, it set things up for the offense.

Aided by a costly personal foul call on a hit to the head of Fields, the Bears took the lead for the first time as Fields found Equanimeous St. Brown over the middle for 18 yards as his first catch with the Bears resulted in a score. Cairo Santos missed the extra point, but the Bears still held a 13-10 lead with under 13 minutes to go.

With the lead in hand, the Alan Williams-led defense started to come after Lance and look like the 2018 version of themselves. Five plays into the 49ers next drive, it was Eddie Jackson coming away with the interception, and he returned it 26 yards to the 49ers 21 yard line. Five plays later, it was another Bears score as Khalil Herbert carried the ball three times, including his three-yard score to extend the lead to 19-10.

That would be all the Bears would need as their defense continued to play lights out the final seven minutes of the game, forcing two turnovers on downs from the 49ers offense. In the end, Eberflus comes away with a win in his first game as a head coach, with the Bears shocking the NFL with a 19-10 victory.

Fields was not at his best, going 8-17 for 121 yards, but 108 of those came in the second half with two huge TD passes. Herbert led the Bears with 45 yards on the ground, while Pettis led the Bears with 51 yards receiving. Lance had a rough go of things, going 13-28 for 164 yards through the air with one interception. He did lead his team with 51 yards rushing, but took way too many hard hits to last as a starter.

Chicago #Bears pull off the upset win over the San Francisco 49ers! ??