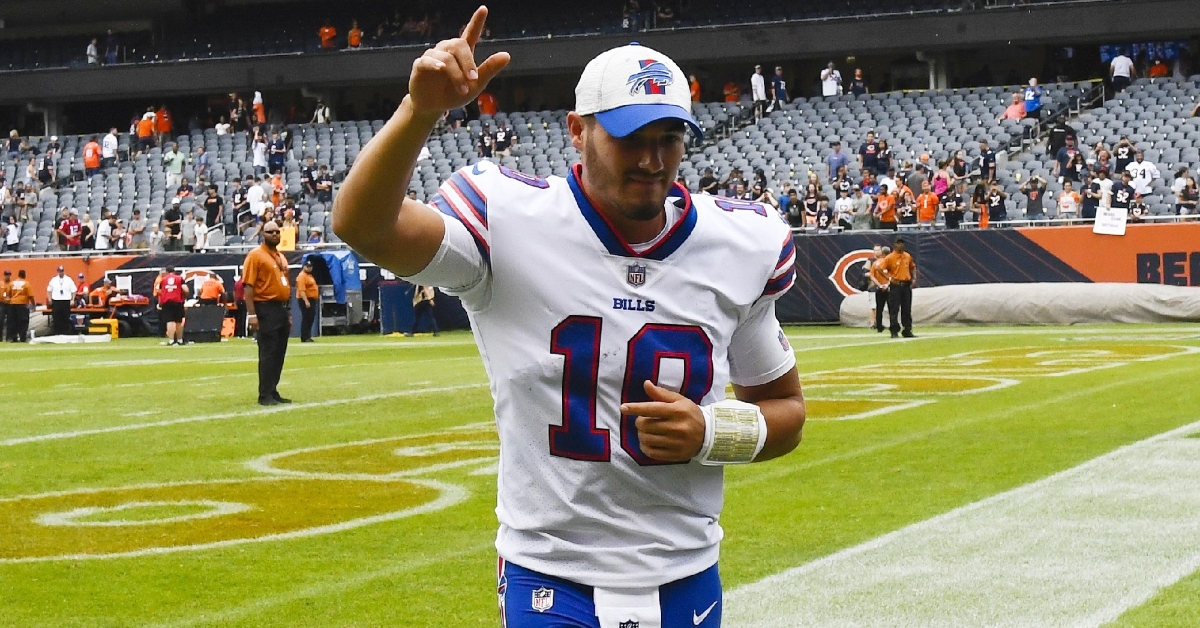 CHICAGO — Plagued by lackluster offensive line play, Chicago Bears (1-1) were unable to settle into an offensive rhythm against the Buffalo Bills (2-0), with Mitchell Trubisky returning to Soldier Field and showing out against his former team. Trubisky started Saturday's game, as Josh Allen was rested, and played the entire first half, going 20-for-28 through the air and throwing for 221 yards and one touchdown. On the flip side, Andy Dalton and Justin Fields were under seemingly constant duress, and, outside of an outstanding touchdown reception by Rodney Adams, did not have much to celebrate in their 41-15 loss.

The Bears opened the game with a three-and-out, and Trubisky, who was met with a mixture of cheers and boos when taking the field, proceeded to lead the Bills on a 72-yard touchdown drive. The Bills opted to go for it on fourth-and-1 at the Bears' 14, and Devin Singletary scored on a 14-yard pitch play. After the Bears failed to move the chains on their second offensive possession, Trubisky commandeered another scoring drive that was capped off by a four-yard touchdown pass from Trubisky to Jake Kumerow. A chaotic two-point conversion, which featured an aerial interruption from the Blue Angels, ensued, and the Bills were failed to convert on it, making the score 13-0.

Tyler Matakevich forced Damien Williams to fumble on a carry near midfield, and Damar Hamlin recovered the loose ball for the Bills. Following the turnover, the Bills punched the pigskin into the end zone for the third time on the afternoon. Zack Moss ran for a first down on fourth-and-1 in Bears territory and later was brought down short of the goal line on an 11-yard carry. The Bills unsuccessfully challenged the play, but Reggie Gilliam scored on the ground from one yard out on the next snap. Trubisky then hooked up with Jacob Hollister on a successful two-point conversion.

Strolling in for six. ??

In the wake of a short kickoff return by Khalil Herbert, Greg Rousseau sacked Dalton on the ensuing three-and-out, and Isaiah McKenzie, who recovered his own muffed punt earlier in the game, returned the punt that followed 35 yards. The Bills took over at the Bears' 34 and did not take long to score. A 19-yard touchdown pass from Trubisky to Matt Breida was overturned by a booth review, but Gilliam then scored his second one-yard rushing touchdown of the contest. A few plays later, Adams somehow reached around his defender and hauled in a pass from Dalton that led to Adams finding room to run and scoring a 73-yard touchdown midway through the second quarter. Cairo Santos' extra point attempt was blocked, though.

We love a good fullback touchdown. ??

The Bills were finally forced to punt on their next possession, but a pair of false starts being flagged in rapid succession contributed to the Bears then turning it over on downs just beyond midfield. Trubisky completed a 26-yard pass to Hollister drove the Bills into field goal range, with Tyler Bass kicking a 33-yarder. Adams fell down while running his route on third-and-long, and Nick McCloud intercepted Dalton's pass and returned it 20 yards to the Bears' 39. Trubisky completed a great pass to Kumerow, who toe-tapped on the sideline for a pickup of 16, and Bass sent a 41-yarder through the uprights on the final play of the first half.

Fields took over under center with the Bears trailing 34-6 at the start of the second half, and Jacob Fromm, who started ahead of Fields when they were Georgia Bulldogs, entered the game for the Bills. Mario Edwards Jr. brought down Fromm for his second sack of the game in the first drive out of halftime, and Fields received a rousing ovation from the same crowd that booed Dalton when the Bears were struggling on offense in the first half. Chris Lacy was flagged for an illegal crackback as the Bears' offensive line continued to struggle, and a punt was not far behind the infraction. Marquez Stevenson returned Pat O'Donnell's 60-yard punt 79 yards to the house.

On consecutive plays, Fields scrambled for 16 yards on fourth-and-3 from the Bears' 32 and completed a nice pass to Jesse James for a gain of 32. The Bears were in the red zone at that point, and Fields scrambled for 11 more yards. However, incompletions on third-and-goal and fourth-and-goal resulted in Fields and the Bears turning the ball over on downs at the Bills' 9-yard line. A holding call on the Bills and a Sam Kamara sack were part of a short Bills possession, and the Bears began their next drive at the Bills' 43.

The third quarter ended not long after a 13-yard run by Fields, who was blown up on a sack to begin the fourth quarter. Andre Smith was flagged for a high hit on the sack, which knocked Fields' helmet off and resulted in a fumble recovered by the Bills, but Fields remained in the game. Herbert scored on the very next play, as he broke a tackle and recorded a 13-yard rushing touchdown. Fields' pass to Adams on the accompanying two-point try fell incomplete. With Davis Webb at quarterback, the Bills went three-and-out, as did the Bears on the succeeding possession, with a successful Bills challenge overturning a 24-yard leaping catch by Jon'Vea Johnson.

An unsuccessful Bears challenge failed to overturn a sliding grab by Lance Lenoir, but a botched snap resulted in the Bills turning the ball over on the next play, with Caleb Johnson recovering the fumble. The Bears took over at their own 34, and Fields drove them to their opponent's 36 before offensive lineman Arlington Hambright put a stop to the momentum by getting flagged for illegal use of hands. However, Brian Johnson went on to nail a 54-yard field goal try.

Tashaun Gipson strip sacked Webb, and Johnson tallied his second fumble recovery of the tilt. Fields was sacked on the play that followed, and the Bears ultimately turned it over on downs at the Bills' 34. Webb then kneeled down three times to run out the clock, and the Bills defeated the Bears 41-15. The Bills picked up 25 first downs — 11 more than the Bears — while the Bears were 0-for-11 on third down and 1-for-4 on fourth down. Also of note, the Bears were penalized 10 times for 73 yards.