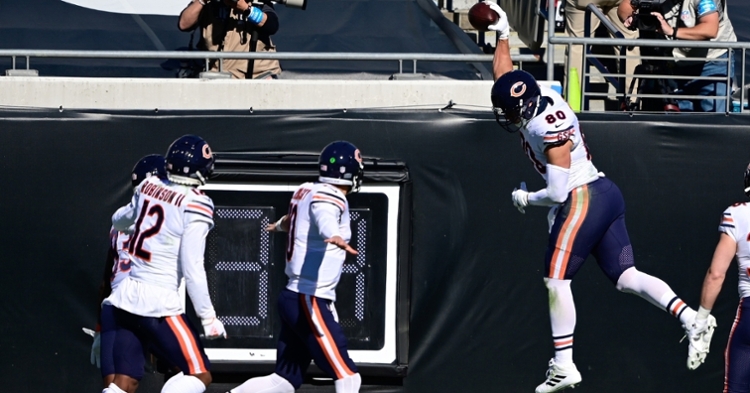 JACKSONVILLE, Fla. — In control of their own playoff destiny, the Chicago Bears (8-7) moved into seventh place in the NFC standings with a victory over the Jacksonville Jaguars (1-14) in Week 16. Winning 41-17 at TIAA Bank Field on Sunday, the Bears scored 31 unanswered points, 28 of which came in the second half, and routed the Jaguars, who are now assured of having the No. 1 overall selection in the 2021 NFL Draft.

Quarterback Mitchell Trubisky shined in the process of leading the Bears to their third consecutive victory, going 24-of-35 for 265 yards and two touchdowns through the air. Trubisky also garnered a rushing score. Former Jaguars wide receiver Allen Robinson also showed out for Chicago, catching 10 passes for 95 yards. Bears tight end Jimmy Graham was on the receiving end of both of Trubisky's touchdown throws, and Chicago linebacker Roquan Smith intercepted a couple of passes made by Jaguars quarterback Mike Glennon, a former Bear.

Jaguars, field goal: Glennon got off to a nice start, converting two third-down passes while driving the Jaguars inside the red zone. Glennon threw incomplete on third-and-5 from the Chicago 8-yard line, though, and Aldrick Rosas then kicked a 26-yard field goal.

Bears, touchdown: The Bears nearly went three-and-out, but Robinson was granted a first down after catching a pass right at the line to gain before having his forward progress halted. A few plays later, Robinson nabbed a low throw and picked up 21 yards after eluding a defender. David Montgomery broke free outside and scooted up the sideline for a gain of 26. Graham followed that up with a 12-yard reception, and Trubisky went on to connect with Graham for a five-yard touchdown pass.

Bears, field goal: Graham started the possession off by hustling for a 30-yard gain after catching a short pass. After throwing an incompletion in the direction of Darnell Mooney, Trubisky completed a 12-yard pass to Mooney on third down, keeping the drive alive. Next, Mooney was targeted in the end zone, with the Jaguars getting flagged for pass interference on the play. The Bears were unable to score after having a first-and-goal opportunity at the 1-yard line, and Cairo Santos made a 20-yard field goal.

Jaguars, touchdown: Glennon was efficient in orchestrating a touchdown drive. He completed a 20-yard touchdown pass to a leaping D.J. Chark, who came down in the end zone after making an impressive grab near the sideline.

Bears, punt: On first down, Trubisky was sacked and lost control of the football. However, the ball bounced directly back to Trubisky, who recovered it. That led to a three-and-out.

Jaguars, punt: On fourth-and-3 at the Jacksonville 35, the Jaguars initially picked up a first down on a direct snap. The fake punt was nullified by an offensive holding call, so the Jaguars punted after that.

Bears, interception: Mooney caught a couple of passes to help Chicago approach midfield. Robinson caught a pass over the midfield for a pickup of 12 yards. Soon after that, he hauled in a nine-yard reception and, on third-and-6, a 12-yard reception. On Robinson's next target, a pass interference call went against the Jaguars. On the ensuing snap, Trubisky was forced out of the pocket by the pass rush before making a risky throw into a mass of players in the end zone. Joe Schobert picked off the ill-advised pass, spoiling an otherwise promising drive by the Bears.

3rd INT this season for @TheSchoGoesOn53!

Jaguars, interception: Two plays after Trubisky's interception, Glennon, who was benched by the Bears in favor of Trubisky early in the 2017 season, was picked off. Smith intercepted a pass and coughed up the football during his return, only to immediately recover it.

Bears, field goal: The Bears took over at the Jacksonville 32 with eight seconds on the game clock and one timeout to work with. Jacksonville played prevent defense, allowing a wide-open Cole Kmet to catch a 10-yard pass over the middle and give himself up. Santos then closed out the first half by splitting the uprights on his 40-yard attempt.

Bears, touchdown: Chicago opened the second half with a touchdown drive. Robinson began the possession with a 12-yard reception, and Montgomery converted a short pass into a gain of 24. The Bears opted to go for it on fourth-and-5 at the Jaguars' 36, and Robinson hauled in an eight-yard catch. Mooney then caught an eight-yard pass of his own, and a seven-yard pass to Robinson on third down advanced the Bears to the 14. Montgomery ran for eight yards, and Trubisky proceeded to score on a six-yard keeper.

Jaguars, punt: The Bears were flagged for a 15-yard penalty on the kickoff, but the Jaguars were called for holding on the first play of the drive. Bilal Nichols nearly intercepted a pass made by Glennon on second down, and Jacksonville wound up going three-and-out and punting. DeAndre Carter was hit hard on the punt return, resulting in a fumble that Sherrick McManis recovered. Bruce Miller, who drilled Carter, was penalized for unnecessary roughness on the play.

Bears, touchdown: Montgomery gained 12 yards on the ground, and Kmet caught an eight-yard pass. Robinson snagged a 13-yard reception on a third-down play, and Montgomery, after recording a 12-yard carry, scored on a six-yard rush.

Now walk it out, @MontgomerDavid!

Jaguars, interception: Making his second interception of the contest, Smith picked off a pass thrown over the middle by Glennon. Danny Trevathan stepped in front of the pass and deflected it right to Smith.

.@Grindin_59 sniffs it out, @RoquanSmith1 takes care of the rest.

Bears, touchdown: Smith's interception set the Bears up at the Jacksonville 25. Following a short run by Montgomery, Trubisky lobbed a throw to Graham, who was wide open. Graham jumped up and made a great grab for a 22-yard touchdown, his second touchdown catch of the afternoon.

What goes up must come down - with @TheJimmyGraham.
TD ?? today.

Jaguars, punt: On third-and-short, Trevathan sacked Glennon, resulting in yet another Jacksonville three-and-out.

Bears, touchdown: The highlight of the Bears' final touchdown drive was Montgomery taking a snap and handing off to Artavis Pierce, who then gained 23 yards on the ground. Pierce reached the end zone on the very next play, scoring from three yards out.

Pedal to the metal. @Ap_Juice2 puts 6 more on da board.

Jaguars, punt: The Jaguars converted on third down and reached their own 45 before punting.

Bears, punt: Three handoffs to Montgomery led to the Bears' first punt of the second half, which came with under seven minutes remaining.

Jaguars, touchdown: Chark hung on for a 19-yard reception, despite getting shaken up by a defender after making the catch, to advance the Jags into Bears territory. Glennon aired out a deep ball to Laviska Shenault Jr., who caught it in the end zone for a 34-yard touchdown.

What a catch by @Viska2live ??

Bears, punt: Nick Foles, who played for the Jaguars in 2019, threw an incompletion on third down, bringing the punting unit onto the field. With the Bears winning in blowout fashion down the stretch, Foles relieved Trubisky under center.

Jaguars, punt: Glennon was chased out of the pocket and flagged for intentional grounding when his throw out of bounds failed to reach the line of scrimmage. The Jaguars punted soon afterward.

Bears, end of game: Two kneel-downs by Foles concluded Chicago's commanding victory. The Bears have now scored 30 or more points in four straight games for the first time since 1965.

Up Next: Entering Week 17, the Bears will be tied with the Arizona Cardinals (8-7) for seventh place in the NFC standings. Chicago holds the tiebreaker over Arizona, and if both teams end up tied with the Los Angeles Rams (9-6), the Bears and the Cardinals will receive playoff bids over the Rams. Therefore, the Bears can clinch a playoff berth with a win over the Green Bay Packers (12-3) on Sunday, Jan. 3. The contest at Soldier Field, which will kick off at 3:25 p.m. CST, is expected to be played in partly cloudy, somewhat windy conditions on a cold afternoon in Chicago. In Week 12, Green Bay defeated Chicago 41-25 at home, so the Bears will be looking to enact revenge against their archrivals.