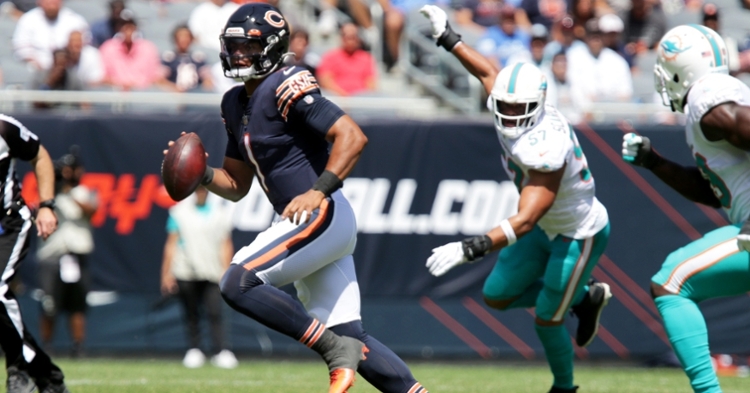 CHICAGO — Putting on a show in his Chicago Bears (1-0) debut, Justin Fields scored two touchdowns — one on the ground and one through the air — in the team's preseason opener against the Miami Dolphins (0-1). The rookie quarterback generated plenty of excitement playing in front of Bears fans at Soldier Field, going 14-for-20 for 142 yards and also rushing for 33 yards. Andy Dalton started under center for the Bears and attempted just four passes. The Bears overcame a 13-0 deficit, dominating the second half and winning 20-13.

The Bears went three-and-out on both of Dalton's series. Meanwhile, the Dolphins took a 3-0 lead on their second possession, as the Bears came up with a goal line stand and held the Dolphins to three. Tua Tagovailoa led the Dolphins down the field, completing a 50-yard pass to Mike Gesicki to set up first-and-goal. Recent signee Alec Ogletree made a splash on defense early on for the Bears, including when he stuffed Malcolm Brown for a two-yard loss on third-and-goal from the 1-yard line. Jason Sanders then kicked a 21-yard field goal.

What a stand at the goal line from the @ChicagoBears defense ?? @MROGLETREE_47

The Dolphins drove to the Bears' 14 on their next possession, but Tagovailoa was intercepted in the end zone by DeAndre Houston-Carson. Fields then entered the game, much to the delight of fans in attendance, and the Bears committed a couple of false starts en route to going three-and-out. Jakeem Grant returned the punt 34 yards to the Bears' 36, but Jacoby Brissett was unable to lead the Dolphins to the end zone, with Sanders kicking a 35-yarder. Three consecutive Fields incompletions resulted in a quick punt for the Bears after that.

Entering the game at QB for the Bears: Justin Fields

Fields fumbled the ball out of bounds when he was hit while scrambling on third-and-long the next time the Bears had the ball. From there, the Dolphins marched to the end zone, with Brissett throwing a 23-yard touchdown pass to Salvon Ahmed. On the ensuing possession, Fields settled in and completed a 15-yard pass to Justin Hardy on third down to keep the drive alive. Khalil Herbert caught several checkdown passes during the drive, and an eight-yard completion to Jesse James set up a 53-yard field goal attempt for Cairo Santos, which he made.

Santos' kick occurred on the final play of the first half, making the score 13-3 in favor of the Dolphins at halftime. Fields came out firing in the second half, though, completing passes of 25 and 13 yards to Rodney Adams prior to Herbert setting up first-and-goal with a 16-yard carry. On second-and-goal, Fields scored for the first time in a Bears uniform when he scrambled from eight yards out and crossed the goal line, despite the fact that the Dolphins were flagged for holding on the play.

Ahmed broke off a 20-yard run on the Dolphins' next drive, but a punt followed shortly thereafter. In the wake of their 77-yard touchdown drive, the Bears recorded a 70-yard touchdown drive that featured Herbert rushing for nine yards on fourth-and-1 from the Bears' side of the field. On a play-action pass, Fields rolled out and found a wide-open James downfield for a go-ahead 30-yard score, Fields' first NFL passing touchdown. Charles Snowden sacked Reid Sinnett on third down to force a Dolphins punt on the succeeding possession.

A three-and-out at the end of the third quarter brought Fields' debut to a close, with Foles serving as the Bears' play caller in the fourth quarter. On the Dolphins' first play from scrimmage in the final period, Chris Myarick caught a 14-yard pass from Sinnett but fumbled, with Marqui Christian jarring the football loose and Dionte Ruffin recovering it at the Bears' 27. In the wake of the turnover, the Bears went three-and-out.

Matt Nagy successfully challenged a 22-yard reception by Gerrid Doaks on the first play of the Dolphins' ensuing drive, as Doaks' knee was down behind the line of scrimmage. The Dolphins went for it on fourth-and-four at the Bears' 34, and Sinnett completed a five-yard pass to Patrick Laird. However, the Dolphins were flagged for pass interference on the play, bringing the punt unit onto the field. Artavis Pierce found room to run and tallied a 51-yard carry into Dolphins territory. The drive ended with Brian Johnson making a 44-yard kick.

On the Dolphins' final possession, Sinnett threw an incomplete pass on a fourth-down play near midfield. A 39-yard run Ryan Nall sealed the deal for the Bears not long after that. The Bears were positioned at the Dolphins' 3-yard line at that point but opted to run out the clock instead of attempting to score. Led by Fields, the Bears outscored the Dolphins 20-0 starting with the final play of the first half and collected a 20-13 victory to begin preseason play.