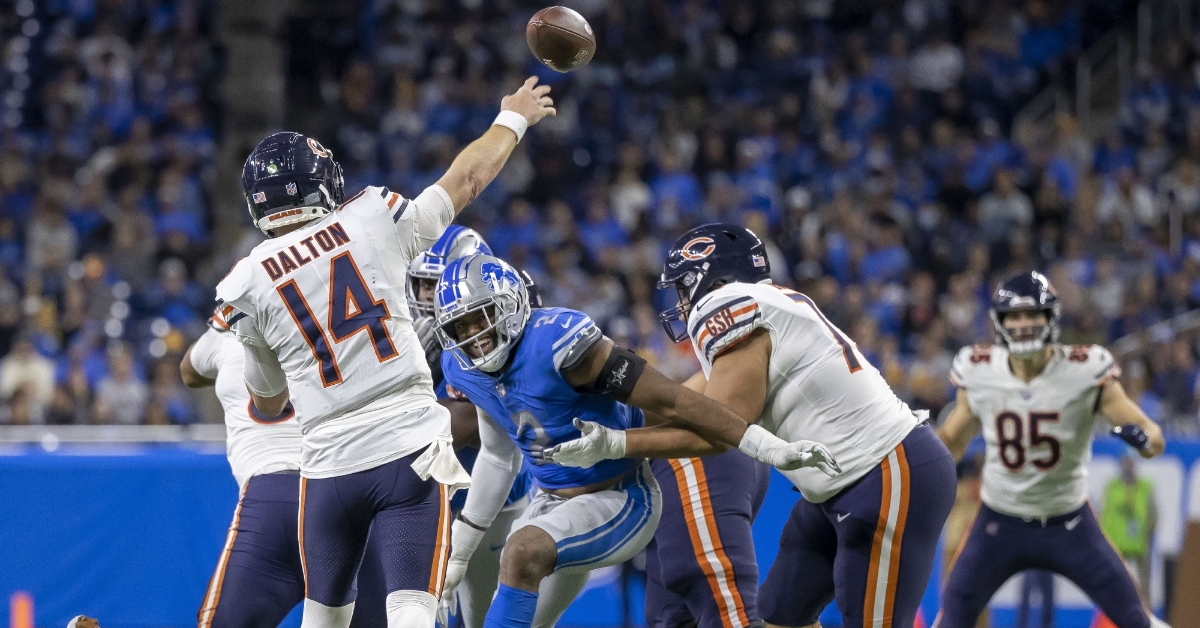 We're more than halfway through the 2021 NFL season, and it has not been disappointing. This year may look a bit different, with 17 games in 18 weeks and seven teams in each league earning a playoff berth. Nonetheless, we won't have a week without football until February 2022, and we couldn't be more excited to cover another year of NFL football. We at BearsHQ decided to give our power rankings of the NFL's 13th week.

For most of the offseason, the Packers were one of the most questionable teams — and it all depended on reigning NFL MVP Aaron Rodgers. Well, he's back, and he's been great this year. The Packers have lost just three times this season to the Saints, the Chiefs, and the Vikings last week. They've had strong wins against the Bengals, Cardinals, and Seahawks, and Rams as well — enough to make them the best team in the NFL.

2. Arizona Cardinals 9-2 (down one spot) COMING OFF BYE

12 weeks in to the NFL season, and the Cardinals are 9-2, riding a potent pass rush and an electric offense to their success so far. Instead of making excuses as to why the Cardinals are winning, maybe JJ Watt is right in saying, "Maybe we're just better." They are in one of the hardest divisions in the NFL but have looked like a playoff team thus. They lost to the Packers, and then Kyler Murray went down with an injury, but the Cardinals have beaten the 49ers and Seahawks without him to hold their No. 2 spot.

It may have surprised some people last year, but the Buffalo Bills being one of the league's best teams this season should come as no surprise. Buffalo is led by superstar QB Josh Allen and a brilliant coaching staff. The Steelers gave the Bills some trouble in week one, but after dominating the Dolphins, the Washington Football Team, the Texans, and the reigning AFC Champion Chiefs, they were the top team in the NFL I believe. The Bills have dropped three of their last five, including getting dominated by the Colts last week. However, a strong rebound on Thanksgiving against the Saints keeps me confident in this pick.

The Ravens quietly have one of the league's best rosters. Despite not winning the division in 2020 and being in one of the NFL's hardest divisions, the Ravens boast a legit chance to win a Super Bowl behind a star quarterback in Lamar Jackson and a defense that consists of one of the best secondaries in the sport. Despite battling plenty of injuries, the Ravens lead the AFC North. They have strong wins over the Chiefs, Browns, and Chargers this season and recently beat the Bears without Lamar Jackson.

The New England Patriots are in the top 5 after strong wins over the Jets, Chargers, Panthers, and a blowout of the Browns after narrowly losing to the Buccaneers and the Cowboys. Bill Bellichick still coaches this team, so you can never count them out. Mac Jones is coming to the form, and the Patriots are hard to play. A strong win over the Falcons and Titans solidifies this.

6. Kansas City Chiefs 7-4 (down one spots) COMING OFF BYE

It would be hard to imagine the Chiefs falling out of the top 10 this season so long as Patrick Mahomes is healthy. This team easily boasts one of the best offenses in the league — while also adding to an offensive line that was exposed in the Super Bowl last year. At one point, the Chiefs sat at 3-4 on the season, but they have rattled off four wins in a row — including wins over the Packers and the Cowboys. Offensively the Chiefs have started to click, so look out for KC.

It's hard not to rank Tampa Bay in the top five in our rankings. First and foremost, the Bucs are our reigning Super Bowl Champion — and they did not lose a single starter over the offseason. The Bucs have a roster construction that could win another Super Bowl, and Tom Brady is never content. But after dropping one to the LA Rams, the Bucs fell to number two. Despite winning against the Patriots in Tom Brady's return to Foxborough and then the Dolphins, the Bucs fell one spot because of the Cardinals and Bills' dominance. Getting past the Eagles, blowing out the Bears but then losing to the Saints, and the Washington Football Team drops Tampa to number 9. They got back on track beating the Giants and Colts in a close one, but need to string some wins together to get back into the top 5.

The Titans are the reigning AFC South champion and have made the playoffs in consecutive seasons — oh, and they've added Julio Jones to an offense that already had Ryan Tannehill, AJ Brown, and Derrick Henry, who just ran for over 2,000 yards. In 2021, no team is going to be looking forward to playing the Titans. The Titans' 2021 season got off to a tough start, though, getting blown out by the Cardinals, but they rebounded nicely with a come-from-behind win over the Seahawks and a solid win over the Colts before dropping to the New York Jets in week four. Beating the Jaguars, Bills, Chiefs, Colts, Rams, and Saints on a win streak moved the Titans up consistently, but getting handled by the Texans and Patriots drops them to 8.

Dallas is flying under the radar this offseason, but a healthy offensive line plus Dak Prescott back from injury leaves Dallas with one of the best offenses in the NFL (which includes Ezekiel Elliot, Amari Cooper, CeeDee Lamb, and Michael Gallup.) The defense is still the clear weakness of this team but has been much better in 2021 — with Trevion Diggs leading the way with eight interceptions. The Cowboys gave the Bucs a tough fight in week one and did not lose until this past week, a disappointing loss to Denver. But they responded by dominating the Falcons and then losing to the Chiefs and Raiders. They're still a good team but are struggling.

The LA Rams may be the most improved team of the offseason just because of their upgrade at QB. Instead of Jared Goff, the Rams have Matthew Stafford leading their speedy offense — and of course, still have Jalen Ramsey and Aaron Donald on the defensive side of the ball. The new-look Rams are 4-1 to show for it, losing to the Cardinals and including an impressive beat down of the reigning champion Tampa Bay Buccaneers. The Rams blew out the Giants, Lions, and Texans to keep the third spot but lost on Sunday night to the Titans, then on Monday night to the 49ers, and this past week to the Packers, dropping them out of the top 5.

Joe Burrow and the Bengals are off to a great start this season. In fact, their losses have come in a game that Burrow threw interceptions of three straight plays, one where their kicker missed the game-winner twice and a stunner against the Jets. The defense may have holes, but the offense is loaded with weapons — including Ja'Mar Chase, Tee Higgins, and Tyler Boyd, a three-headed monster of receivers for Joe Burrow to throw to. Wins over the Steelers, Vikings, Jaguars, Lions, and now Ravens put the Bengals as a top 10 team, but their consecutive losses to the Jets and Browns knocked them down a peg. The Bengals could get back on track by beating the Raiders and dominating the Steelers, and they looked great.

Back in our top-15 rankings this week are the 49ers after rattling together some impressive wins as of late, including a strong win over the LA Rams and Vikings this past week. The 9ers seem to have figured out the offense to pair with their great defense, and the results have them currently in line for the playoffs.

LA might have had the best offseason in the AFC. Justin Herbert is coming off of an impressive campaign in which he won Rookie of the Year, and the Chargers have added to his offensive line - while also making some key acquisitions to the defense, the weakness of the team in 2020. That, plus some opt-outs and injuries back, leave the Chargers with one of the most talented and intriguing rosters in 2021. It wasn't particularly pretty, but the Chargers gutted out an impressive week one win and took a hard to swallow week two loss against Dallas, but handling the Kansas City Chiefs and earning a win in week three, beating the Las Vegas Raiders in prime time and winning a shootout over Cleveland solidified LA as a top 5 team for me. With a chance to prove that, LA lost to the Ravens, handily, and then the Patriots before beating the Eagles and then losing to the Vikings. The Chargers had a strong win over the Steelers on SNF this past week before dropping a bad one to the Denver Broncos.

The Raiders are back in the top 15. It's been an up and down year for Vegas, losing head coaches and players to legal and social issues, but the Raiders have won some impressive games — including going toe to toe with the Cowboys on Thanksgiving. The defense definitely has holes, but the offense leads the NFL in passing.

The Colts are in our top 15 after stringing together some strong wins after starting slow. The Colts have been bolstered by an above-average defense and breakout sophomore Jonathon Taylor who leads the league in rushing. Carson Wentz is starting to figure it out, and I think the Colts are going to make a push for the playoffs. Blowing out the Bills makes this likely. They dropped a close one to the Bucs after leading, but I still like them.

Minnesota now finds themselves in our top 15 after winning some close games. If a few things could have broken differently, the Vikings could be a top-five team. The defense is the weakness, but an offense that boasts Dalvin Cook, Justin Jefferson, and Adam Theilen is certainly a scary one for opposing defenses. Back-to-back wins over the Chargers and Packers leave the Vikings in position for a playoff push even with the loss to the 49ers.

It's been up and down for the Bears, with ugly losses against the Rams and the Browns. But in week four, Matt Nagy handed over play-calling to Bill Lazor, and the Bears looked like a much different, better team since. However, a five-game losing streak, including heartbreaking losses to the Steelers and Ravens (without Lamar Jackson), put the Bears near the bottom of our rankings. Getting back on track against the Lions on Thanksgiving was nice, but this team needs to get healthy.