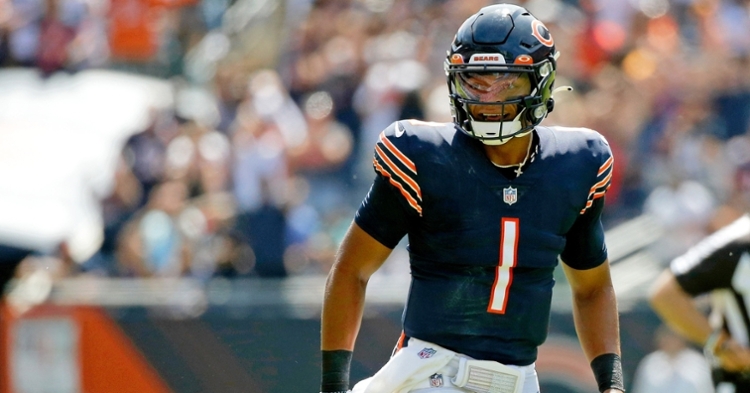 The Chicago Bears opened their 2021 preseason slate with a solid home win against the Miami Dolphins 20-13. Saturday marked the beginning of a new era with Andy Dalton and Justin Fields in Chicago. Dalton went on to play two series and did show a ton given the circumstances, but it was Fields who came up huge.

Jason Sanders had the Dolphins up 6-0 early on a pair of field goals as Tue Tagouviola was doing a good job moving the ball downfield against the Bears defense. The Dolphins then jumped in front 13-0 when Jacoby Brissett found Salvon Ahmed for 23 yards and a touchdown. Coming off a great 2020 season, Cairo Santos got the Bears on the board before the half crushing a 53-yard field goal as time expired.

Down by 10 in the second half, Fields started to showcase his talent as the Bears offense started to click. Not only did he record his first NFL touchdown on the ground, but he later found Jesse James wide open behind the defense for a 30-yard touchdown putting the Bears on top for good 17-13. Brian Johnson knocked home a 44-yard field goal in the fourth to cap off the scoring, with the Bears taking their preseason opener 20-13.

Of all the rookie quarterbacks who saw action in week one, Fields was the most impressive of them all. His first two series were not the best, but after that, he settled in nicely. Fields completed 14-20 passes for 142 yards and a score for the game while adding 33 yards on the ground with another score.

I get that most of that damage was done against second-stringers, but the amount of poise and confidence he showed while commanding the offense was promising. If things work out with Fields, he will give the Bears their first franchise quarterback since Jay Cutler, and some may argue that even he wasn't a franchise player.

Fields has all the tools to be an excellent QB for years to come. Not only does he have the big arm you love in a QB, but he is accurate, which has lacked in the Bears passing game for the better part of the last five years. Fields also knows how to use his legs and won't hesitate to run if he needs to.

The Bears had a similar type of QB in Mitch Trubisky, but he turned out to be the exact opposite of what the Bears were looking for when all was said and done. The hype around Fields this season is for real, and fans let him know what they think of him the moment he stepped on the field. With two weeks left in the preseason, look for Matt Nagy to give him every chance to win the starting job, even if he said it's Dalton's to lose.

"It was a house party going on at Soldier Field." ??

The crew likes what they saw from Justin Fields in his NFL Preseason debut.

Was it enough to name him the Week 1 starter ?? pic.twitter.com/tisSrfI2L3

Khalil Herbert could be a playmaker

With David Montgomery and Damien Williams, the top RB's the Bears rushing tandem appears set. However, there is an opening on the roster to at least start the season as Tarik Cohen remains on the PUP list recovering from a torn ACL last season.

When Cohen comes back, he will immediately be inserted onto the roster in some capacity, given how valuable he is in different phases of the game. Until that point, the Bears may look for a new No. 3 RB and the preseason will go a long way in determining who wins that spot. Although Artavis Pierce led the way in rushing, Khalil Herbert stood out as someone who could be a real X-Factor in this offense.

As you watched Saturday's game unfold, Herbert started to get some touches and finished with six carries for 38 yards to go with 11 yards receiving. He played very similar to the Cohen plays and displayed plenty of play-making ability. Not only is he fast, but he is a strong runner with great vision.

With some playing time up for grabs to begin the season, it wouldn't shock me in the slightest to see Herbert open the season as the No. 3 back until Cohen is ready to go. Despite getting drafted in the later rounds, Herbert could be a steal for Chicago as this offense has more talent than they have ever had under Nagy.

‘Juice’ was impressive in Chicago pic.twitter.com/sA9MhnbDqm

The offensive line just got better

Outside of the QB chatter this season, the other main topic all offseason was how the offensive line would play. We saw the Bears get younger by drafting Tevan Jenkins and Larry Borom while moving Cody Whitehair from center to LG to help this team.

With Jenkins sidelined with a back injury, the Bears offensive line took a significant hit, but they still appear to be in a better position this season than in the past. Following their game on Saturday, news broke that former Philadelphia Eagle OT Jason Peters has agreed to a one-year deal with the Bears, which is an impressive signing.

That pickup alone instantly made this team better, as Peters will be the starter in week one. The nine-time pro bowler will most likely take over the LT position, which will not only allow Jenkins to fully heal, but will allow the Bears to develop him at their own pace instead of pushing him before he is ready.

Nick Foles is very familiar with how Peters plays, given that Peters was the Eagles LT during the Foles Superbowl run in the 2017 season. These are the moves that Ryan Pace has been making all season. Not only are they surprising moves, but moves that make this team better and prove that the Bears want to win now more than ever. Hopefully, Peters gets into a preseason game the next few weeks to get his feet wet, but if he is ready for week one, fans won't complain.

- Scouted to Arkansas to play DL

- Prepared to play OL in pre-draft training, and went undrafted

- Signed with BUF as UDFA