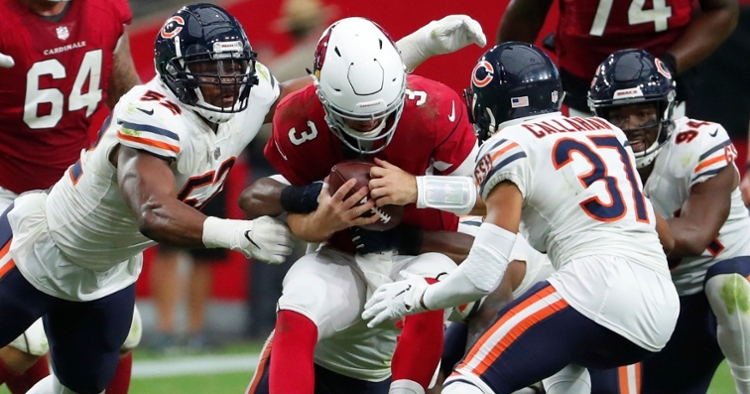 The Chicago Bears return to Soldier Field to play in front of the home fans this weekend. It will not only be for the first time in December, but it will be the first time the Bears return home, coming off a win since early October, as things haven't been great for them this season. Regardless, this team is still in the playoff hunt and is currently just one game out of that final spot, so there is plenty left to play for.

Standing in their way this weekend is another tall task as they welcome the Arizona Cardinals to town, who are coming off a bye week. Not only that, but the 9-2 Cardinals occupy the top seed in the NFC and have the best record in the NFL at this point. While this may seem like an unfamiliar opponent, history doesn't show that as these teams have been battling forever, with the Bears holding a dominating 57-28-6 mark thus far.

These teams go back to the 1920s when the Bears were known as the Decatur Staleys while the Cardinals were the Chicago Cardinals. Across their first five meetings, it was the Cardinals owning the Bears posting a 3-1-1 mark. The Bears ripped off three straight wins after that before starting to take advantage of the series throughout the late 1920s.

Once the 1930s hit, it was all Chicago as the Cardinals were searching for answers. In fact, Chicago won nine of the first 10 games in the 1930s, with that other game being a tie. Following another tie, the Bears ripped off eight wins in a nine-game stretch, which meant they went 18-1-2 against the Cardinals over 21 games. That is a run that Chicago can't say they have had against too many teams, and that alone is a big reason why the series is where it is at today.

Throughout the next 20 years, the series was much more competitive, but again, the Bears held the advantage through this stretch as they continued to find ways to beat the Cardinals. If it wasn't for a few three-game winning streaks by the Cardinals, who knows how lopsided this series would be now. It wasn't until the 1960s when the Cardinals left Chicago for St.Louis, and once that happened, the balanced and competitive play continued.

That continued through the 1980s, where the Cardinals won their final two meetings against Chicago in 1982 and 1984 as the St. Louis Cardinals. Six years later, these teams met again as the Cardinals were now the Phoenix Cardinals before embracing their current name of the Arizona Cardinals. Across their three meetings in the 1990s, the Bears went 2-1, dropping their final contest in 1998 by a score of 20-7.

The 24-23 game is the one to remember as that was Dennis Greene's we are who we thought they were speech. The Bears entered that game sporting a 5-0 mark and needed a late Devin Hester 83-yard punt return to seal the deal and keep them unbeaten.

Over their last four meetings, each team has won two games, with the Cardinals winning in 2009 and 2015 while the Bears claimed victory in 2012 and 2018. In 2009, the Cardinals dominated Chicago 41-21 as Kurt Warner torched the Bears secondary for five touchdown passes. The Bears had a fine performance from Jay Cutler, who threw for 369 yards and three touchdowns, but it wasn't enough in the end.

2012 saw Cutler and the Bears try their luck in the desert as they came out on top 28-13. Despite only throwing for 146 yards and one score, it was the Bears defense that forced a pair of Ryan Lindley interceptions, including a 10-yard pick-six from Charles Tillman, to set the tone. Larry Fitzgerald had another big game against the Bears, as did Matt Forte.

The Cardinals returned to Chicago three years later, where things did not go well, with the Bears falling 48-23. Much like the last time Arizona played in Chicago, it was the passing game that did Chicago in with Carson Palmer tossing four touchdown passes despite needing only 185 yards to do so. The Bears were forced to use both Cutler and Jimmy Clausen in this one as neither of them could do much for the offense. Fitzgerald continued to torch the Bears secondary, hauling in eight catches for 112 yards and a trio of scores.

The last meeting between these teams came in 2018, and one that saw the Bears squeak out a 16-14 win to improve to 2-1 on the season. The loss also dropped the Cardinals to 0-3 as this was Matt Nagy's first year as head coach. Led by Mitch Trubisky and his 220 yards passing, the Bears defense came up huge as they intercepted Sam Bradford and Josh Rosen three times. None of those interceptions resulted in scores, but it did shorten the field, which led to several Cody Parkey field goals.

This will be the teams first meeting since 2018, and things look drastically different. You have a Bears team coming off a much-needed win, but a team that needs to put a nice run together in a hurry. On the other side, you have a Cardinals team, that despite missing Kyler Murray the last few weeks, have managed to stay above water and continue to lead the NFC with a 9-2 mark. Arizona is also riding a two-game winning streak at Soldier Field, so it will be interesting to see how things shake out this weekend.