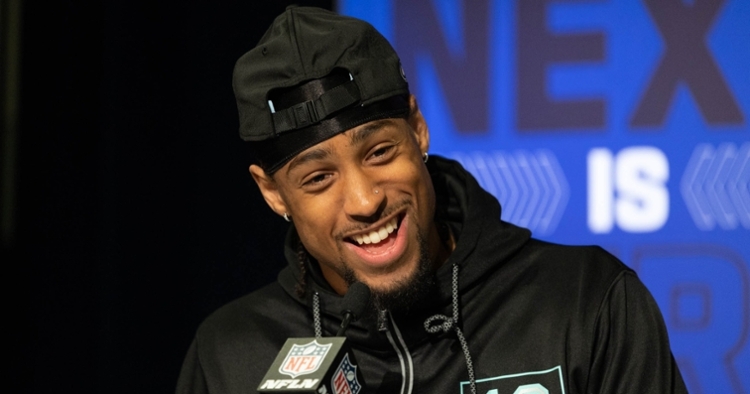 Possible starter found on Day 2 of the NFL draft.

The Chicago Bears drafted Washington cornerback Kyler Gordon with pick No. 39 overall in Round two of the 2022 NFL draft on Friday night.

In 2021, Gordon was a first-team All-Pac 12 selection with 46 tackles, including two tackles for loss, two interceptions, and a team-high seven pass breakups in 12 starts.

Two positive notes were that he didn't allow a touchdown in his 18 career starts and had no penalties against him the last two seasons.

Gordon has super athleticism with explosiveness and abilities to make plays on the ball, including run support. He is a possible Day 1 starter opposite Jalen Johnson as Gordon certainly has the coverage skills and instincts to make an impact in the NFL.

Solid pick by the Bears as they certainly had a need in the defensive backfield.

"Cornerback who comes with an elite, high-performance engine but a GPS still in the process of loading," NFL.com analyst Lance Zieerlein said of Gordon. "Gordon's dynamic athletic qualities will show up in testing, but more importantly, they are all over his tape. His blend of play strength and explosive burst affects the passing game from press, off-man and zone coverages. He plays with an alpha demeanor and hitting is definitely part of his overall package. Gordon lacks polish and needs to play with better route recognition and anticipation, but if those elements click, his ball production could be near the top of the league as one of the top playmakers in the game."

The Bears will also pick at No. 48 and No. 71 so we will let you know what happens next for the Monsters of the Midway.

Kyler Gordon gives us the first draft hug of the day!@kyler_gordon | @ChicagoBears

#GoHuskies CB Kyler Gordon (#2) stepped this past weekend in the absence of Trent McDuffie.

Here he shows great vision when mirroring his receiver and then quickly breaks on the ball for his FIRST interception of the game. pic.twitter.com/tFeMsQ6LvK

Kyler Gordon on the tackle and I am here for it. pic.twitter.com/7KmIzCZ1EE

Here's my rapid, minutes-after-the-pick evaluation of the Bears' selection of CB Kyler Gordon at No. 39.

- Fills obvious need.
- Investing in a premier position is always good.
- Give me a potential Day 1 starter over a small-school WR or a WR with character concerns.