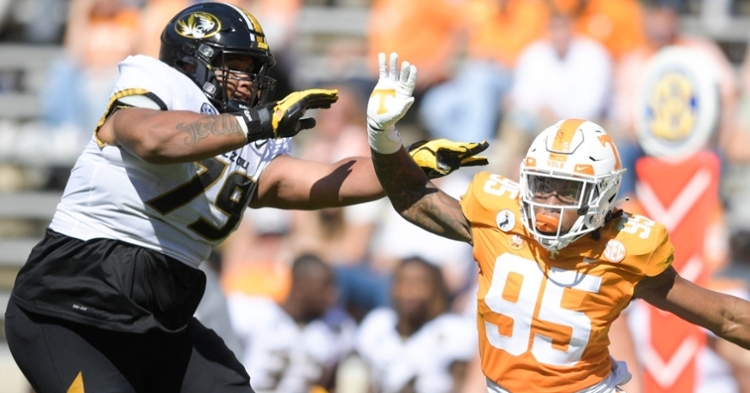 Former Missouri right tackle Larry Borom was drafted by the Bears in the fifth round. (Credit: Calvin Mattheis/Pool via News Sentinel via Imagn Content Services, LLC)

CHICAGO — The Chicago Bears closed out the 2021 NFL Draft by making five selections on day three. After not having a selection in the third or fourth rounds, the Bears picked offensive tackle Larry Borom out of Missouri in the fifth round on Saturday. The 22-year-old pass blocker was selected at No. 151 overall, joining former Oklahoma State offensive lineman Teven Jenkins as the second right tackle taken by the Bears in this year's draft. Borom, who is 6-foot-5 and 332 pounds, helps bolster a Bears offensive line that was in need of improvement following an underwhelming 2020 season.

Even MORE POWER in the trenches!

The Bears went on to trade the No. 208 pick (sixth round) to the Seattle Seahawks in exchange for the No. 217 (sixth round) and No. 250 (seventh round) selections. At No. 217, the Bears chose Khalil Herbert, a 23-year-old running back from Virginia Tech, who was second-team All-ACC in 2020. Soon afterward, at No. 221, the Bears drafted wide receiver Dazz Newsome. The 21-year-old wideout played for North Carolina and was second-team All-ACC in 2019.

Different position but a name we're no stranger to...

With their first defensive selection of the draft, the Bears chose cornerback Thomas Graham Jr. out of Oregon at No. 228. Graham, 21, opted out of the 2020 college football season but did play in the Senior Bowl in January. Chicago's final pick came in the seventh round, with the Bears drafting defensive tackle Khyiris Tonga, 23, from BYU at No. 250. Selecting seven total players in the 2021 NFL Draft, the Bears picked five offensive players and two defensive players.

Flipped the script and went defense.