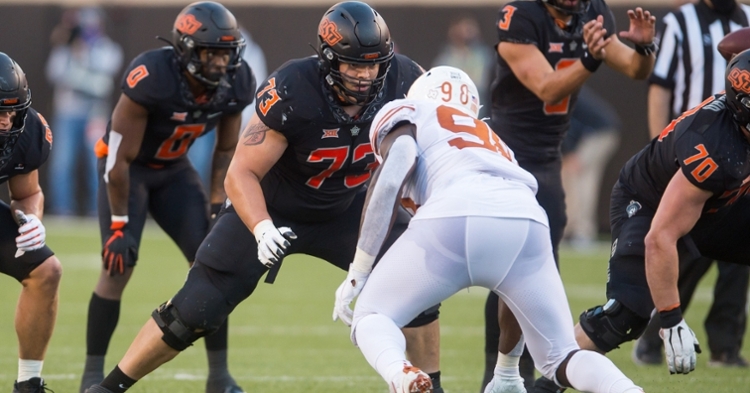 CHICAGO — The Chicago Bears addressed a need on the offensive line by trading up to draft a highly touted offensive tackle in the second round on Friday. Selecting right tackle Teven Jenkins of Oklahoma State at No. 39 overall, the Bears traded multiple picks with the Carolina Panthers in order to move up and draft 23-year-old Jenkins, who will likely start up front as a rookie.

Jenkins, who stands at 6-foot-6 and weighs 320 pounds, entered the 2021 NFL Draft boasting a first-round grade, so the Bears' front office was assuredly delighted that he slipped to the second round. As a senior in 2020, the pass blocker was a first-team All-Big 12 selection for the Cowboys. The Bears received the No. 39 and No. 151 (fifth round) picks from the Panthers in exchange for the the No. 52 (second round), No. 83 (third round) and No. 204 (sixth round) selections. Jenkins was the fifth offensive lineman taken in the draft.

Gettin' tougher in the trenches.

#Bears trade up to draft Teven Jenkins of Okla St, an offensive tackle many had projected to go in the first round. Jenkins can play RT, has nasty streak that's a positive, and strengthens position group in need of depth. Ryan Pace paying steep price says how much Jenkins valued.

UPDATE: Jenkins talked to the media after being drafted and provided the following quotes.

.@TevenJenkins: "To come to this beautiful city of Chicago, I’m just really excited and ready to get to work.”

.@tevenjenkins on playing with an edge: "I don't care who you are, I'm going to attack you and impose my will against another man."