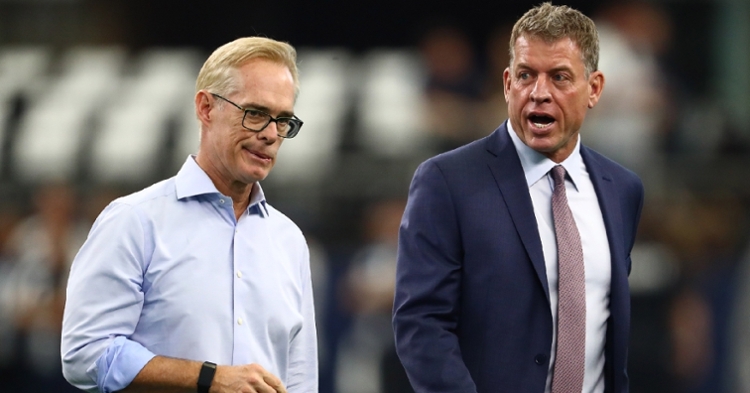 ESPN has signed acclaimed play-by-play commentator Joe Buck and leading football analyst Troy Aikman to multi-year deals, as the NFL’s longest current booth pairing and Pro Football Hall of Fame members will become the new voices of Monday Night Football. The iconic duo’s 2022 Monday Night Football debut will mark their 21st NFL season in the booth together, matching the legendary Pat Summerall and John Madden’s all-time record as on-air NFL partners. In their two decades together, Buck and Aikman have called six Super Bowls, surpassing all other pairings/booths except for Summerall and Madden. Accomplished commentator Lisa Salters, Monday Night Football’s longest-tenured sideline reporter, will return for her 11th season on the series. John Parry will be the officiating analyst once again.

As part of the agreement, Buck and Aikman will both contribute content to ESPN+, with more details to be announced at a later date.

In the upcoming 2022-23 NFL Season, ESPN’s portfolio of games will increase from 20 to 22, with the addition of an exclusive Monday Night Football game on ABC and an exclusive Sunday international game on ESPN+. Adding in the Week 18 doubleheader which began this past season, ESPN will have three weeks with multiple games this season. That number jumps to five beginning in the 2023-24 season and continues for 10 seasons. ESPN will continue to televise the Pro Bowl, resulting in a 23rd game in the 2022-23 season. More details on who will be calling the additional games will be provided at a future date.

Aikman’s broadcasting ascension was preceded by three Super Bowl wins and a renowned career as quarterback of the Dallas Cowboys. He was enshrined into the Pro Football Hall of Fame in 2006, his first year of eligibility. Buck joined Aikman in the Pro Football Hall of Fame in 2020, as he was honored with the Pete Rozelle Radio-Television Award, recognizing his impact after more than 25 years of calling some of the sport’s biggest moments and matchups.

Buck and Aikman’s regular-season Monday Night Football debut is set for September 12, 2022, beginning the longstanding television series’ 53rd season. Phil Dean will return as producer, and Jimmy Platt as director, for their third and fourth seasons, respectively, on the weekly franchise. On the same night, Monday Night Football with Peyton and Eli will return for a second season.

“When you have the opportunity to bring in the iconic, longest-running NFL broadcasting duo, you take it, especially at a time when we are on the cusp of a new era in our expanding relationship with the NFL,” said Jimmy Pitaro, Chairman, ESPN and Sports Content. “The NFL continues to ascend, and we now have more games than ever before, providing additional opportunities for Joe, Troy and our deep roster of commentators.”

Stephanie Druley, ESPN Head of Event and Studio Production, said, “Joe and Troy’s résumé and longevity together is unparalleled amongst today’s NFL broadcasters. Throughout their many marquee games, including an impressive six Super Bowls, their knowledge has made viewers smarter and their passion is evident. They’ve been there for some of the NFL’s biggest moments and we are fortunate to bring that experience to Monday Night Football. Together, with the excellent reporting and storytelling of Lisa Salters, Joe and Troy will provide the foundation for this new era of Monday Night Football.”

Joe Buck added, “Everything about Monday Night Football, including the broadcast, set the standard for the modern NFL experience. My earliest memories of walking around football stadiums are tagging along with my dad as he called Monday Night Football on radio. To return to the stadium on Monday nights with Troy – who I have the utmost comfort with and confidence in – and begin a new chapter, for us and ESPN, has me excited about this season and our future.”

Troy Aikman said, “The opportunity to be a voice on Monday Night Football, adding to its legacy and being a part of the future of the NFL on ESPN, has me motivated and reflective. As a kid in California, the voices of Frank Gifford, Howard Cosell, and my mom’s personal favorite, Don Meredith, echoed throughout our living room each week. Joe and I are humbled to be part of that same tradition that has existed for more than 50 years across generations of football fans. I am looking forward to the next several years with ESPN and all our new teammates.”

Buck and Aikman have been the NFL’s most consistent broadcasting tandem, beginning their partnership in 2002 as a three-man booth with analyst Cris Collinsworth, before becoming a duo in 2005. Over their 20 seasons together, they have called more than 275 regular-season games, more than 40 playoff matchups, 18 NFC Championships and Super Bowls XXXIX, XLII, XLV, XLVIII, LI and LIV. Both have been nominated for Sports Emmy Awards multiple times, with Buck winning a record-tying eight times for play-by-play.

Aikman retired from the NFL after the 2000-01 season and went immediately into the booth, working the 2001-02 season for FOX Sports, where he remained for the past two decades.

At a mere 25 years old, Buck became a household voice for NFL fans. He made his NFL debut during the 1994-95 season, calling a full slate of games for FOX Sports, a role he has continued each subsequent year. As he enters his 29th consecutive season calling NFL games, Buck will become the eighth play-by-play voice of Monday Night Football. He has also continued a family legacy, as he and his dad, Jack, are the only father-son duo to both call network Super Bowls and be recognized with the Pete Rozelle Radio-Television Award. Jack Buck also had significant history with Monday Night Football, calling play-by-play on the national radio broadcast from 1978-1984 and 1987-1995.

Outside of the NFL, Joe Buck’s career accomplishments are vast and impressive, calling 24 World Series, 22 MLB All-Star games, five of golf’s U.S. Opens, and having hosted his own studio shows. Buck has been named the National Sports Media Association’s National Sportscaster of the Year four times, including three years in a row (2002-04, 2006).

In the 2023-24 season, and through the duration of the landmark 10-year ESPN/NFL rights agreement, ESPN will have 25 games annually, consisting of 23 regular-season games and a Wild Card and Divisional Playoff game. ESPN will also televise the Pro Bowl, adding a 26th game to each season. ESPN and ABC will televise Super Bowl LXI (2026-27 season) and Super Bowl LXV (2030-31 season).

Monday Night Football with Peyton and Eli will provide 10 alternate telecasts for the next three NFL seasons, part of ESPN and Omaha Productions’ enhanced agreement that was announced earlier this year.

Like most kids of my generation, I grew up watching MNF w Frank Gifford, Howard Cosell & my mom’s favorite Don Meredith so you can only imagine my excitement to be part of the legacy of MNF & continue working w Joe Buck, my broadcast partner for the last 20 years!#MNFonESPN?? pic.twitter.com/MKPeqncs0l