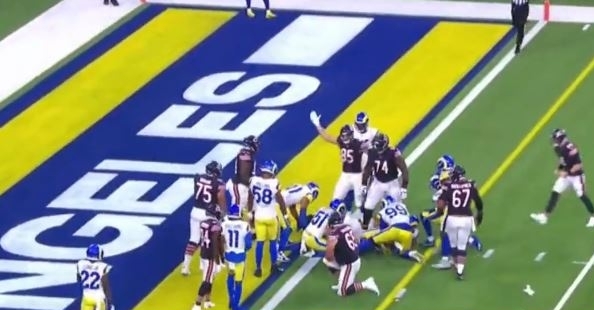 Aaron Donald wasn't able to keep Montgomery from the endzone

The Chicago Bears rushing attack has been impressive in the first half of action against the Rams on Sunday night.

Starting running back David Montgomery had a three-yard touchdown run late in the second quarter to pull the Bears within six points at 13-7.

Montgomery has been the Bears' best player in the first half with 10 carries for 79 rushing yards and a score.

He now has a streak of seven straight regular-season games with a touchdown dating back to Week 12 of the 2020 season.

Check out the touchdown below:

We've got ourselves a game! ??

David Montgomery gets #DaBears on the board.

David Montgomery running like he’s pissed off about the Iowa State loss.