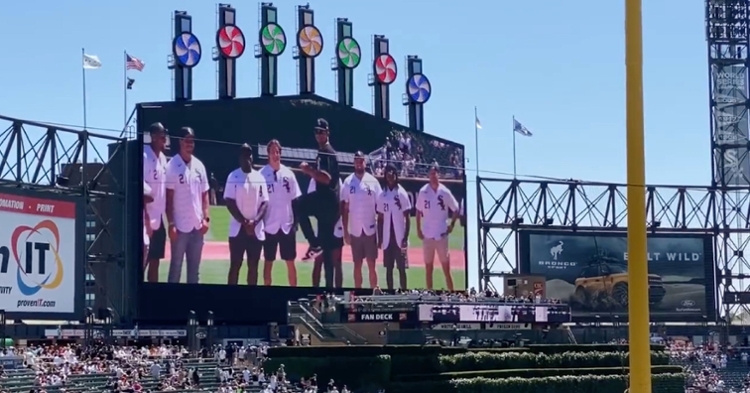 After starring in his Bears debut on Saturday, Justin Fields threw out the first pitch at Guaranteed Rate Field on Sunday.

CHICAGO — Chicago Bears quarterback Justin Fields made his NFL debut in the Bears' 20-13 preseason win over the Miami Dolphins on Saturday. The promising rookie was responsible for two touchdowns in the Bears' come-from-behind victory at Soldier Field, giving Bears fans plenty to be excited about.

Fields followed up his superb performance in the preseason opener by throwing out the first pitch at Sunday's Chicago White Sox game. With the White Sox taking on the New York Yankees at Guaranteed Rate Field, the Bears' rookie class was honored prior to the game.

All of the rookies were on hand and sporting White Sox jerseys, and the star rookie, Fields, was granted the opportunity to throw out the first pitch. Fields, who wore a black jersey that differed from the other rookies' white jerseys, threw the ball over the plate to Southpaw, the mascot of the White Sox, and was cheered on by fans.

Here’s footage of @justnfields throwing out the first pitch at the @whitesox game with the rest of the @ChicagoBears rookies! @BarroomNetwork @VinnieParise @GBraggsJr23 pic.twitter.com/jlWjmXicrd

The Monsters of the Midway x The Southsiders pic.twitter.com/r20t1wpON4

The rookies gathered around the mound for a group picture to commemorate the special occasion. Fields dapped up star White Sox shortstop Tim Anderson, as well, and seems to have already attained celebrity status in the Windy City before he has even suited up in a regular season contest.

We were excited to welcome the Bears rookies to the park, including a first pitch by @justnfields. pic.twitter.com/rhJu9RBP0F