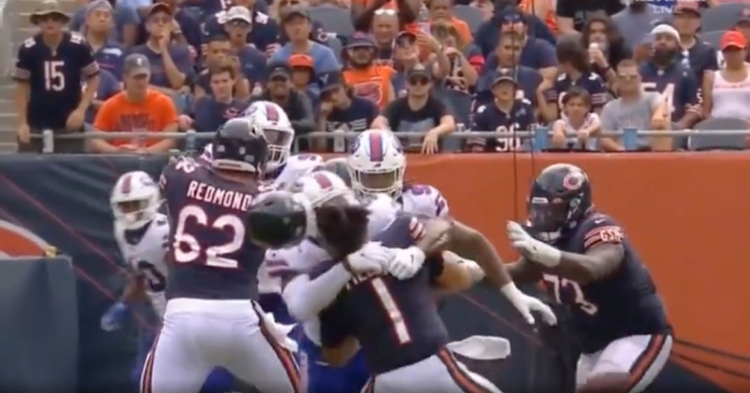 CHICAGO — In a contest that featured subpar offensive line play by the Chicago Bears throughout, quarterback Justin Fields was rocked by a big hit that resulted in his helmet flying off. With the Buffalo Bills blowing out the Bears 41-6 at Soldier Field on Saturday, linebacker Andre Smith was flagged for roughing on the passer on the play.

Smith was unblocked on the opening snap of the fourth quarter as he blitzed into the backfield and sacked an unprepared Fields, who, quite literally, did not know what hit him. Fields fumbled, and the Bills recovered the fumble. However, Smith was flagged for hitting Fields in the head/neck area.

Fields remained in the game after the strip sack was waved off due to the penalty, and running back Khalil Herbert broke a tackle and scored on the very next play. Herbert's 13-yard touchdown carry was followed by an incomplete pass from Fields on the two-point conversion attempt, resulting in the score standing at 41-12 with 14:53 remaining.

UPDATE: Smith was fined $5,806 by the NFL as a result of the violent hit on Fields.