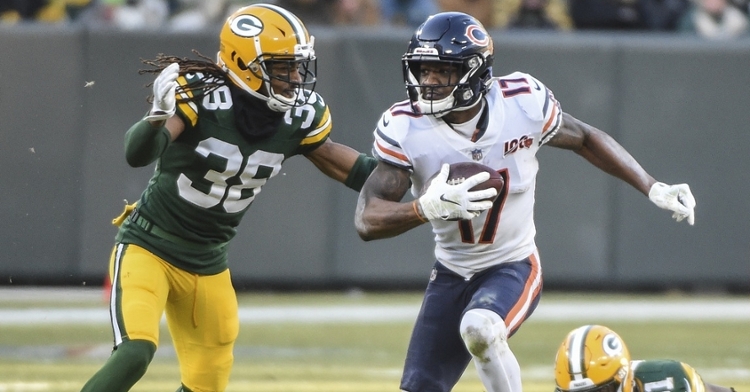 Wide receiver Anthony Miller was a bright spot for the Chicago Bears, as he nabbed nine receptions, including a touchdown grab. (Credit: Benny Sieu-USA TODAY Sports)

GREEN BAY, Wis. — In need of a win in order to keep their slim playoff chances alive, the Chicago Bears (7-7) fell to the rival Green Bay Packers (11-3) on Sunday afternoon. Losing 21-13 at Lambeau Field, the Bears came up short after a series of laterals on the final play of the game culminated in the Bears fumbling just outside of the Packers' end zone. Chicago did no go down without a fight, outscoring the Packers 10-0 in the fourth quarter, but, in the end, Green Bay pulled off the season sweep of the "Monsters of the Midway" and dashed the Bears' postseason hopes. The Bears had to earn a victory in order to remain afloat in the playoff hunt, meaning that the defeat officially nullified the Super Bowl aspirations that surrounded the Bears at the start of the season.

The Bears outgained the Packers 415-292, but, fitting with the theme of the Bears' season, Chicago was unable to make the most of its offensive opportunities, going 9-for-20 and 0-for-3 on third and fourth downs, respectively. With that being said, the frigid conditions on the "Frozen Tundra" did not make matters any easier for either offensive unit, and the Packers came out on top in spite of the fact that they converted a modest 12 first downs and had possession of the ball for fewer than 26 minutes of play. Bears quarterback Mitchell Trubisky went 29-of-53 for 334 yards through the air. Trubisky threw one touchdown pass and two interceptions, with each of the picks proving to be inconsequential, while Packers gunslinger Aaron Rodgers also tossed one touchdown pass.

The Packers did not suffer any turnovers, though, and Rodgers did just enough to lead his team to victory. Rodgers was a mediocre 16-of-33 on pass attempts and amassed a modest 203 passing yards, but he orchestrated three touchdown drives, nonetheless. Green Bay wide receiver Davante Adams hauled in a 29-yard touchdown pass from Rodgers in the first quarter, and, on the ground, Packers running back Aaron Jones scored a 21-yard touchdown and a 2-yard touchdown in the third quarter. Meanwhile, the Bears' only points through three quarters came on a 30-yard field goal by kicker Eddy Pineiro late in the first half. Pineiro later connected on a 27-yard attempt on the first play of the fourth quarter.

On their next possession, the Bears scored their lone touchdown of the day, with Trubisky capping off the 13-play, 67-yard drive via a 2-yard touchdown pass to wideout Anthony Miller, who led all pass catchers in the contest with nine receptions for 118 yards. With one second remaining, the Bears' put forth a valiant effort on the last play of the game. The ball was snapped at Green Bay's 34-yard line, and a short pass was followed by several successful laterals. However, a fumble eventually occurred, and it was recovered by the Packers at the 2-yard line, thus ending the contest. During the course of the loss, Bears wide receiver Allen Robinson II caught seven passes for 125 yards, and Bears defensive tackle Akiem Hicks recorded four tackles in his return to the lineup after an injury layoff.