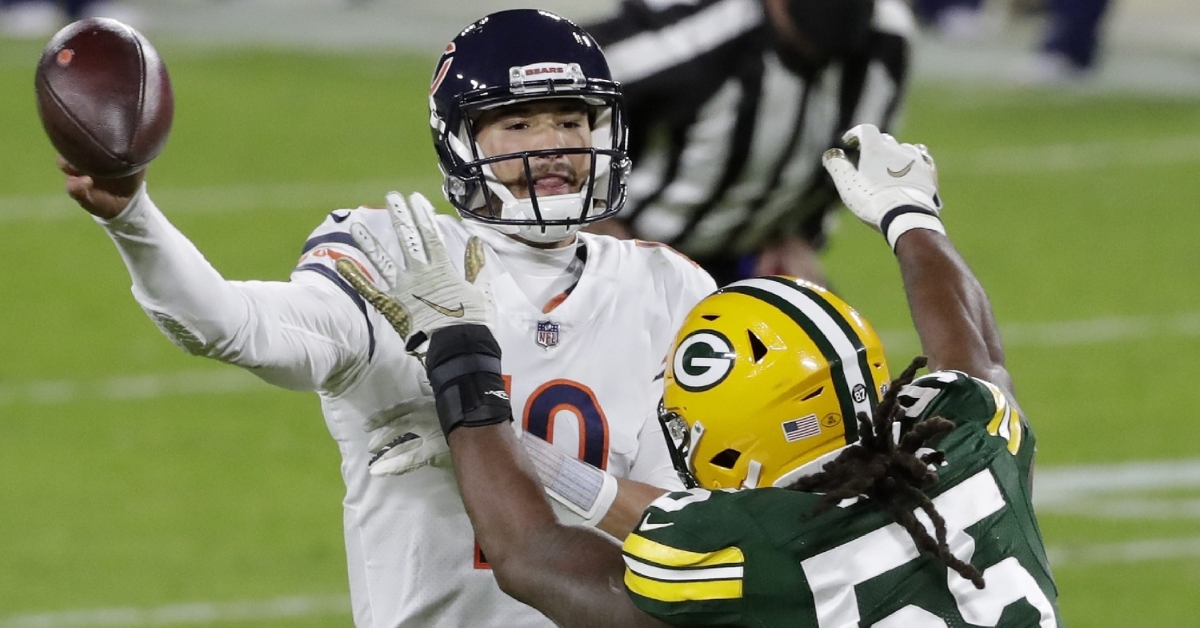 colelittle7®
7:22 PM
Bears lose but still earn a trip to the playoffs (thanks to the Rams). Packers earn home-field advantage.

colelittle7®
7:11 PM
Rodgers to Adams for a 6-yard TD. Packers will have home-field advantage in the playofs. Bears need Rams to hold on against Cardinals to reach playoffs.

colelittle7®
7:08 PM
Amos (a former Bear) picks off Trubisky. Bad decision by Trubisky on a pass to Kmet in tight coverage.

colelittle7®
7:02 PM
Packers snap out of their offensive slump & drive down the field for a TD. Jones with a 4-yard TD rush.

colelittle7®
6:57 PM
Vildor lets what should've been an INT slip through his hands. Packers then convert on 3rd down for their 1st 3rd-down conversion of the half.

colelittle7®
6:51 PM
Yet another 4th & short on this drive. This time, the Bears don't convert. Trubisky nearly picked off on play blown up from the start.

colelittle7®
6:47 PM
Mooney shaken up by huge hit after eluding a tackle & breaking another one. Turns nothing into & something before former bear Amos plows into him.

colelittle7®
6:42 PM
Another 4th & inches for the Bears after Montgomery brought down short of line to gain. Trubisky powers his way for 1st down on QB sneak. Bears might've gotten away with false start on play.

colelittle7®
6:40 PM
Trubisky with his first misfire in a while. Misses a throw to an open Wims downfield. Montgomery then fights for extra yardage on wildcat run.

colelittle7®
6:25 PM
Mingo nearly picks off pass on 3rd & 1. Packers forced to punt. Bears can take the lead with a TD drive.

colelittle7®
6:19 PM
Bears stall out in the red zone. Montgomery tries his best to fight for extra yardage after catching short pass on 3rd down. Santos kicks 20-yarder.

colelittle7®
6:17 PM
Bears with their 1st big play of the day on offense. Mooney makes a leaping grab for a gain of 50+ yards. Dropped TD by Packers gave Bears new life.

colelittle7®
6:15 PM
Kmet catches a pass & hustles for a 1st down. Banged up at the end of the play. He's the Bears' leading receiver so far.

colelittle7®
5:49 PM
Trubisky nearly squanders drive. Fortunate not to get picked off in end zone on bad throw. Santos kicks chip shot after that.

colelittle7®
5:43 PM
Trubisky picks up 1st down with QB sneak. Bears then turn the ball over again but get bailed out by Packers being offside.

colelittle7®
5:33 PM
Dafney (don't feel bad if you're never heard of him) catches a 13-yard TD after a GB penalty. Packers in control.

colelittle7®
5:05 PM
Bears move the chains before Trubisky gets sacked. An incompletion follows.

colelittle7®
5:02 PM
Tonyan catches a 3-yard TD pass from Rodgers to begin the 2nd quarter. 1 possession apiece for both teams so far. Both end in TDs.

colelittle7®
4:57 PM
Adams gets held on 4th & 3 pass to the end zone. He gets upset with refs before flag thrown late. Appears to be the correct call. Packers facing 2nd & goal to start the 2nd quarter.

colelittle7®
4:53 PM
Another Bears injury. This time, it's Roquan Smith, who drops to the ground in pain. Meanwhile, Packers at the Chicago 26. colelittle7®
4:41 PM
Montgomery already back in. Seemed to hyperextend his knee. He comes back in & picks up 8 yards on the ground.

colelittle7®
4:34 PM
Bears driving after taking over near midfield. Montgomery has picked up 2 1st downs on the ground.

colelittle7®
4:31 PM
Really strange start to the game. Patterson attempts to field the opening KO out of bounds to draw a flag, but he almost touches it inbounds first. Packers challenge the call (giving the Bears great field position). Maybe the 1st time in Bears-Packers history the opening KO has been challenged. Call stands. Bears begin at the 40.

Week 17 matchup. Regular season finale. As for the playoffs, if the Bears win, they're in.

Bears quarterback to have season-ending surgery