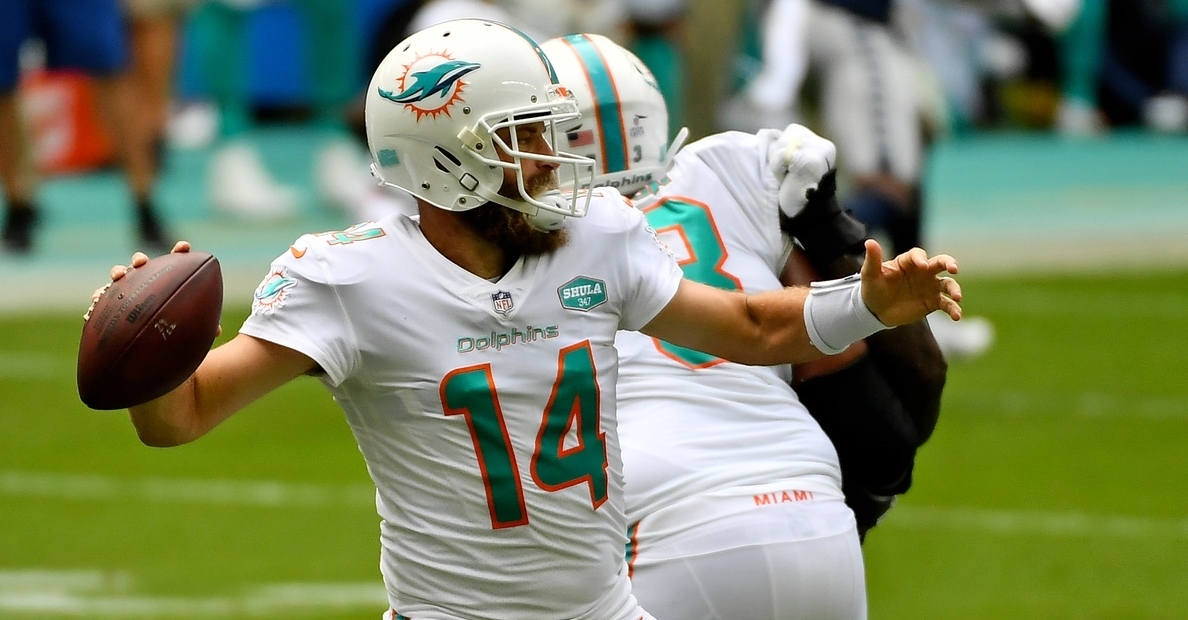 As much fun as it would be to have either Deshaun Watson or Russell Wilson land in Chicago, the reality is that it most likely won't happen. That means until further notice, the Bears are entering next season with Nick Foles as their QB unless something happens in the coming months. Drafting a QB is always an option, but sometimes that doesn't work out in your favor. Take Mitch Trubisky, for example.

If the Bears do elect to draft a QB this season, don't expect them to do that until the middle rounds meaning they probably won't be ready to start this season. That would mean the Bears would need to go with Foles this season as a bridge type of QB. If that is the Bears plan, why settle for Foles as a bridge QB when other options are available.

One of those options is the bearded wonder Ryan "Fitzmagic" Fitzpatrick, who wants to sling it with someone in 2021. The now-former Miami Dolphins QB lost the job to Tua Tagoviola last season but still played tons of snaps in relief roles down the season. With the Dolphins committed to Tua, Fitzpatrick is now a free agent and intends to play this season. Despite being 38 years old, there will be plenty of teams looking to add his services, and the Bears should be one of them, even if for just one season.

Fitzpatrick left his future up in the air to hang them up after last season, but he has reiterated that is not the case, and he intends to play this season. The Harvard graduate defines a journeyman QB, bouncing around quite a bit since coming into the league 16 years ago. Fitzpatrick has had some success from a win-loss side of things but has never started a postseason game in his career, which is a concern. However, the Bears would give Fitzpatrick the best team he has ever had, so there is some optimism that he would make it this year.

Not only does Fitzpatrick have a big beard, but a big personality, big heart, big desire to win, and a strong enough arm to still make the throws you expect him to make. In a season in which he bounced between starter and backup, Fitzpatrick completed more than 68% of his passes for 2091 yards to go with 13 touchdowns and eight interceptions. That is not only a higher completion percentage than both Foles and Trubisky, but the numbers themselves are also comparable.

Fitzpatrick also posted a 95.6 passer rating in 2020, which was the second-best of his long career thus far. Chicago obviously would choose Wilson and Watson over him, but they could do much worse than him if he becomes their best option. If the Bears plan is to find not only a franchise QB but a long-term franchise QB, then Fitzpatrick isn't their man. Given his age, you are looking at a guy who has one maybe two years left in him.

If Chicago is looking to spend money in other places and develop a franchise QB, Fitzpatrick is the perfect one-year solution. He would come at a reasonable price but would be an upgrade over what they currently have and possibly an upgrade over Trubisky. As mentioned, he has never started a playoff game, but a lot of that has to do with the cast around him. The Bears give him the best cast of players he would have with the Dolphins coming in a close second, and we saw how much better they were last season.

Fitzpatrick has had five seasons of over 3000 yards passing, including two north of 3800. Both of those totals would rank No.1 and No.3 in team history as the Bears are the only team without a 4000-yard passer in team history. Fitzpatrick is approaching 35000 yards passing for his career and could reach 40000 if he plays two more seasons. His 223 touchdowns and 169 interceptions aren't the greatest of ratios, but he does rank higher than you would expect on the career touchdown list.

His best season came with the Jets in 2015 when the Jets went 10-6 and missed the postseason. In that year, Fitzpatrick threw for a career-high 3905 yards, a career-high 31 touchdowns, and 15 interceptions. I am not expecting him to put up a season like that again. Anything close to that would be huge for Chicago.

If he puts up 3500 yards, 25 TDS, and 14 or 15 interceptions, not only will Chicago be in good hands, but Fitzpatrick will finally be in the postseason. Let's see if Fitzmagic can bring the magic to Chicago for one season.