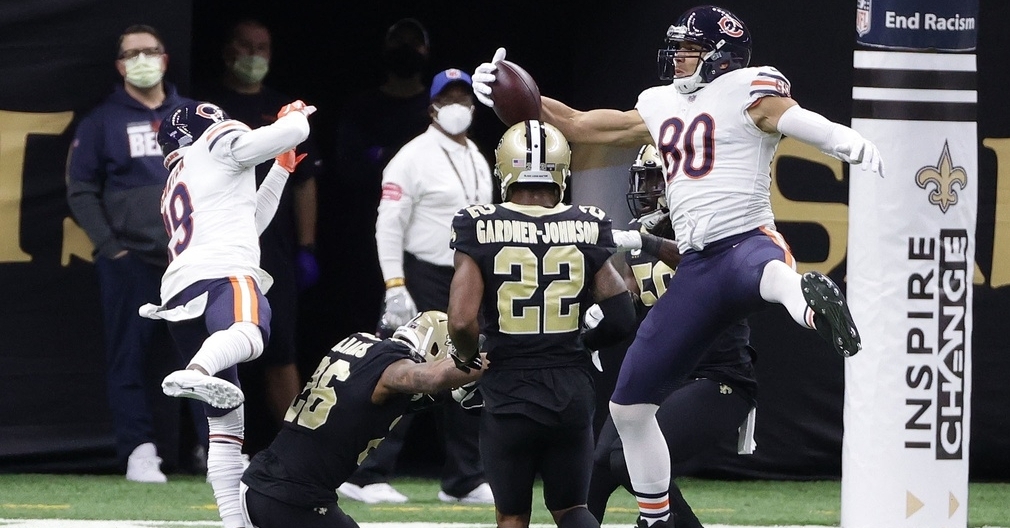 NEW ORLEANS — A 99-yard touchdown drive in garbage time was not indicative of the offensive performance put on by the No. 7 Chicago Bears in their playoff loss to the No. 2 New Orleans Saints on Sunday. The Saints took care of business at home in the NFC Wild Card Round contest, dominating the second half and winning 21-9.

Former Saints tight end Jimmy Graham caught a walkoff touchdown pass on the final play of the game, providing the Bears with their lone touchdown of the affair. Bears wide receiver Javon Wims dropped a touchdown pass in the first half, potentially changing the trajectory of the remainder of the game, and Chicago's season ultimately ended at the Mercedes-Benz Superdome.

Saints, punt: The Bears won the coin toss and deferred to the second half. On the first third-down play, Drew Brees completed a 13-yard pass to Michael Thomas for a first down. The Saints drove into Chicago territory, when the Bears' pass rush stepped up and helped force a punt.

Bears, punt: The Bears went three-and-out on their first offensive possession, with Janoris Jenkins nearly intercepting Mitchell Trubisky on a third-down pass over the middle.

Saints, touchdown: Deonte Harris was an X-factor all game long, and he caught a nine-yard pass and a 17-yard pass on this drive. Thomas capped off the drive with an 11-yard touchdown reception, his first of the season.

Bears, turnover on downs: Wims experienced an interesting turn of events on the Bears' second offensive drive. Mitchell Trubisky lobbed a perfect deep ball right into Wims' arms, but Wims lost control of the football while being tackled out of bounds. Initially ruled an incompletion, the ruling was overturned after a Bears challenge. Instant replay showed that Wims made enough steps up the field before dropping the ball.

On the very next snap, Wims dropped a surefire touchdown after getting behind the coverage, letting the football slip through his hands. Coming on a trick play that featured David Montgomery taking the snap in a wildcat formation before handing the ball off to Cordarrelle Patterson, who then pitched it to Trubisky, the drop proved critical. Chicago wound up going for it on fourth-and-4 at the New Orleans 34, and Trubisky scrambled for two yards before being pushed out of bounds.

Someone wipe the slime off that ball!

Javon Wims with a nightmarish drop for #DaBears fans and bettors ??

Saints, missed field goal: Following the turnover on downs, Taysom Hill picked up 10 yards on the ground, and Harris caught a 17-yard pass. On the first play of the second quarter, Duke Shelley dove for an interception and then ran 16 yards to the Bears' 42. However, a review of the play determined that the football hit the ground before Shelley controlled it, thus allowing New Orleans to retain possession. Soon afterward, Will Lutz kicked a 50-yard field goal wide right.

A breakdown of the interception that was changed to an incomplete pass in #CHIvsNO: pic.twitter.com/FRwxzv5Wex

Saints, fumble: With Hill at quarterback, Gipson knocked the ball up into the air while Hill was beginning his throwing motion. John Jenkins recovered the airborne fumble at the Saints' 24-yard line.

Bears, field goal: A questionable unsportsmanlike conduct penalty on Cole Kmet hurt the Bears' chances of reaching the end zone. Kmet was flagged after barking back and forth with Malcolm Jenkins and tossing the ball over Jenkins' head to a referee. The penalty turned third-and-5 into third-and-20 and led to Cairo Santos kicking a 36-yard field goal a few plays later.

Saints, punt: The Saints garnered one first down before having to punt.

Bears, punt: Anthony Miller made an 11-yard catch, and the Bears caught a break on the next set of downs. Montgomery nabbed a short pass but had the ball jarred free by P.J. Williams upon turning around to head upfield. Jenkins ran the loose ball to the house, but it was ruled an incompletion. The Saints challenged the call, which was upheld.

In #CHIvsNO, the ruling on the field of an incomplete pass stands. Here’s why: pic.twitter.com/r9798rM1in

Saints, punt: Harris continued to wreak havoc on the Bears' defense with a 24-yard reception. The Saints made it beyond midfield but had to punt once a third-down pass to Thomas was broken up.

Bears, punt: A three-and-out was followed by a penalty-laden punt. The follow-up punt ushered in halftime.

Bears, punt: Patterson opened the second half with a 42-yard kickoff return to the Chicago 34. Robinson made two great catches in short order, starting with a 21-yard pass he snagged in midair while being closely guarded. Two plays later, he lunged for a 15-yard reception. The Bears reached the Saints' 32 before Sheldon Rankins sacked Trubisky for a loss of eight. Following an ensuing incompletion, Miller was ejected for hitting C.J. Gardner-Johnson in the helmet after the play. Offsetting penalties were called on the two, but only Miller was thrown out. Interestingly, Wims was ejected from the Bears' Week 8 loss to the Saints for smacking Gardner-Johnson in the helmet after a play was over. With Darnell Mooney already inactive due to injury, Miller's ejection made matters even more difficult for Chicago's passing game.

Anthony Miller EJECTED ??#DaBears +10 has an even bigger hill to climb to win this gamepic.twitter.com/CF6AP53aej

Saints, touchdown: A time-consuming drive that lasted just under 7 1/2 minutes was punctuated by a touchdown pass. On the second play of the possession, Alvin Kamara coughed up a handoff but was able to recover it. Thomas then broke free in the secondary and hauled in a 38-yard pass. The Saints methodically drove into the red zone, and Shelley helped break up a would-be 19-yard touchdown pass to Cook. Following a delay of game, Cook made up for failing to catch the aforementioned pass in the end zone by fighting for extra yardage on an 11-yard reception. On fourth-and-3, the Saints' offense remained on the field, and Eddie Jackson provided New Orleans with a new set of downs by jumping into the neutral zone. A few plays later, Brees tossed a six-yard hook pass to Latavius Murray that resulted in a touchdown.

Brees to Thomas for 38 yards! #ForNOLA

Bears, punt: Marcus Lattimore made an athletic play in swatting away a long pass intended for Wims. Chicago punted a couple of plays later.

Saints, touchdown: En route to the Saints scoring, Brees converted on three third-down passes. Kamara picked up 10 yards on a third-and-6 pass, and Harris made a five-yard grab on third-and-4. On third-and-11, Lil'Jordan Humphrey evaded defenders and picked up some crucial yards after catch for a 14-yard pickup. On second-and-goal, a Khalil Mack sack, which would have resulted in a loss of 14, was nullified by defensive holding. A three-yard touchdown run by Kamara at the 8:50 mark of the fourth quarter provided the Saints with a comfortable lead.

Kamara is back in the end zone!

Bears, punt: Trubisky short-armed a throw to DeAndre Carter on third down, and Pat O'Donnell punted.

Saints, turnover on downs: Kamara broke off a 25-yard run that advanced the Saints to the 22. On fourth-and-goal at the 1, Drew Brees jumped toward the end zone and reached the ball out in order to break the plane. Brees was initially credited with a touchdown, but a replay review determined that he was stopped short of the goal line.

Bears, touchdown: In the wake of the turnover of downs, the Bears closed out their season with a touchdown drive. Riley Ridley made two 18-yard catches during the possession. On the game's final play, Graham pulled off an impeccable one-handed grab for a 19-yard touchdown and, with no time left on the game clock, then immediately headed to the locker room.

The Bears were handed their first postseason loss versus New Orleans, making them 2-1 all time in playoff games against the Saints. The nine points given up by the Saints marked the lowest such point total allowed by a New Orleans defense in the franchise's postseason history.

Up Next: After beginning the season 5-1, Chicago lost six in a row and was able to do just enough to earn the NFC's final spot in the newly expanded playoffs. The seventh-seeded Bears then put together a mediocre offensive showing against the second-seeded Saints, ending the Bears' season in lackluster fashion. An 8-8 regular season that featured plenty of ups and downs and a relatively forgettable playoff performance are sure to result in many question marks surrounding the Bears heading into offseason. The Bears will enter the 2021 slate looking for their first postseason victory since the 2010 season.