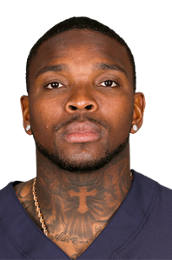 Defensive Back
B I O
PRO CAREER:

Two-time Pro Bowl selection (2018, 2019)
Has started all 62 games in which he has played in his career, missing just two games in 2018
Has six defensive touchdowns in his career, the most in the NFL since he entered the league in 2017; the first two came in the same game vs. CAR (10/22/17), a 75-yard fumble return and a 76-yard interception return; his third score was a 65-yard fumble return at BUF (11/4/18); fourth was a 27-yard interception return vs. MIN (11/18/18); the fifth was the very next week, a 41-yard interception return at DET on Thanksgiving (11/22/18); the sixth was an 8-yard fumble return at the LAR (10/26/20)
Owns 31 passes defensed, six fumble recoveries (three returned for TDs), 10 interceptions (three returned for TDs) and seven FF
His 76-yard INT and 75-yard fumble recovery for touchdowns vs. CAR (10/22/17) made him the first player in NFL history to return both a fumble recovery and interceptions 75+ yard touchdowns in the same game; also made him the first rookie in NFL history with multiple 75+ yard defensive touchdowns in the same game
Since 1970, he is the only other player with 3+ defensive touchdowns of 65+ yards in a 2-season span is Deion Sanders (3 in 1994)

Started all 16 games, recording 82 tackles, one TFL, three FF and five PD
Recorded a scoop-and-score touchdown on an 8-yard fumble return in Week 7 at the Rams, the sixth touchdown of his career and the third FR for touchdown; also had a season-high nine tackles
Recorded six tackles, including five solo, in the Week 1 win at Detroit; deflected a Matthew Stafford pass late in the fourth quarter that led to a Kyle Fuller interception, setting up Chicago's game-winning drive in the final minute
Eight tackles (seven solo) in the win over the Giants in Week 2; had a pick-6 called back due to penalty
Forced a fumble in the Week 6 win at the Panthers; had another pick-6 called back due to penalty
Tailled seven tackles and forced a fumble in Week 10 vs. Minnesota
Recorded six solo tackles in the Wild Card playoff game at the Saints

Pro Bowl selection for the second straight yea
Started all 16 games, recording 60 tackles, five passes defensed, two interceptions, one forced fumble, one fumble recovery, one sack and five TFLs
Tied his career-high with 10 tackles at Denver (9/15) before besting that with 11 tackles at PHI (11/3
Recorded game-clinching interceptions in Week 13 at Detroit and in Week 17 at Minnesota

Selected to his first Pro Bowl and named to the Associated Press All-Pro team after finishing fourth in the NFL with six interceptions
Started 14 games (inactive Games 15-16), recording 51 tackles, 14 pass defenses, six interceptions (two returned for a TD), one sack, one tackle for loss, two forced fumbles and one fumble recovery (returned for a TD)
5-yard fumble recovery for a touchdown at BUF was his second career fumble recovery for a touchdown
Recorded first career sack vs. Seattle (9/17)
Active, but did not play in Wild Card playoff game vs. Philadelphia (1/6/19)

Started all 16 games as a rookie, recording 70 tackles, 6 pass defenses, 3 fumble recoveries (1 returned for TD), 2 interceptions (1 returned for TD), 1 FF and 1 TFL
Jackson's 76-yard INT and 75-yard fumble recovery for touchdowns vs. CAR (10/22) made him the first player in NFL history to return both a fumble recovery and an INT 75+ yard TDs in the same game; also made him the first rookie in NFL history with multiple 75+ yard defensive touchdowns in the same game
His 75-yard fumble recovery was 3rd-longest in Bears history
Week 7 performance earned him NFC Defensive Player of the Week Honors
Recorded multiple tackles in 13 of 16 games