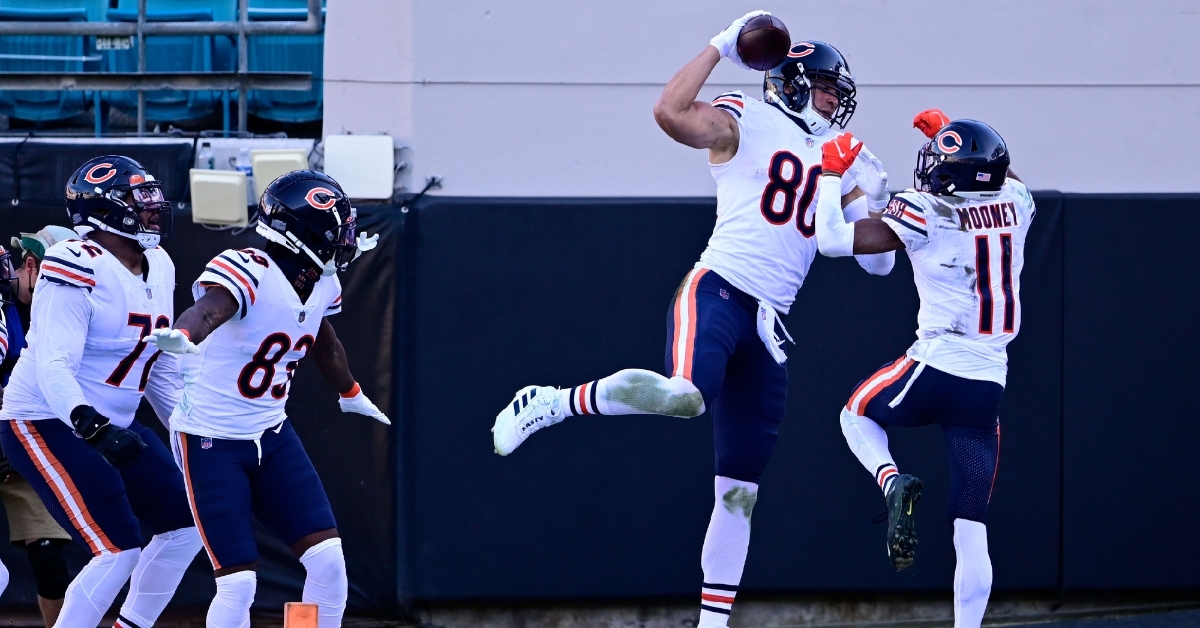 Graham and Co. celebrating after the touchdown (Douglas DeFelice - USAT)

Another week has now come and gone in the NFL, we are nearing playoff time. There have been injuries, comebacks, no fans (at least in most stadiums), and tons of fun in this crazy 2020 season.

At BearsHQ, we would love to deliver our Week 17 NFL Power Rankings after a fun and wild week 16.

1. Chiefs 13-1 - The reigning Super Bowl champions have stayed steady with the top spot in our rankings. After a tough win over the Panthers, the Chiefs continue to rattle off wins and look to be the cream of the crop in the AFC. A strong comeback against the Raiders and domination of the Bucs and Broncos solidifies this choice. A win over the Dolphins, Saints, and Falcons gives the Chiefs the AFC’s top spot and our top spot.

2. Bills 12-3 - The AFC East belongs to the Bills. Looking to stay hot, the Bills lost a heartbreaker on a Hail Mary play against Arizona. Otherwise, the Bills have been one of the best teams in football as of late and proved it when they thumped the Steelers, Broncos, and now Patriots in back to back weeks.

3. Packers 12-3 - The Packers quietly went 13-3 last season and started off year 2 of the Matt Lafleur era with a bang and a 12-3 record to show for it. It was a little too close for comfort against the Jaguars, but a win is a win for Green Bay. They’re exciting but beatable — though they’ve looked extremely dominant over the last few weeks.

4. Saints 11-4 - After losing in the postseason in heartbreaking fashion three years in a row, Drew Brees returned with a Lombardi trophy in mind. Brees is back from injury, and they only lost to the Chiefs by three points, but they rebounded nicely with a dominant win to knock the Vikings out of playoff contention.

5. Seahawks 11-4 - Russell Willson and the Seahawks are now back in our top five. Not that their play has especially impressed us, but some gritty wins puts them in line for a division title and a chance at the first-round bye. Willson is still having a great season, so keep an eye on the Seahawks as they get healthy.

6. Buccaneers 10-5 - A team with tons of expectations is starting to show why. Off the bye, the Bucs have rattled off three wins in a row and have looked better in each and every one.

7. Ravens 10-5 - Baltimore sits at 10-5 after a tough loss in a monsoon against the Patriots, an overtime loss to Tennessee and a five-point loss to Pittsburgh without many starters due to Covid, a rebound win over the Cowboys — and a gritty win over the Browns. The Ravens are looking back to form and back on track as the playoffs approach with a dominant win over the Jaguars and Giants. This team is getting hot at the right time.

8. Steelers 12-3 - The Steelers have looked beatable lately, and they finally took their first loss to the Washington Football team. Now, the Bills handed them their second loss, and the Bengals gave them their third. Steelers are still good but falling fast — a nice win over the Colts keeps them afloat.

9. Dolphins 10-5 - Whether it's Ryan Fitzpatrick or Tua Tagovailoa, the Miami Dolphins continue to win games. The Dolphins are in every game, and have destroyed the 49ers and the Rams now, and beat the Cardinals and Chargers. Do not sleep on the rebuilding Dolphins, even though they came back to life a bit with a loss to the Broncos, because they rebounded with a nice win over the Jets. This past week a loss to the Chiefs drops them a bit, but they got back on track with wins over the Patriots and Raiders.

10. Colts 10-5 - The Colts were in our initial top 15 heading into the year, but a loss at the hands of the Jaguars dropped them out of it. The Colts have been up and down this year, but a strong win over the Titans on Thursday Night Football and then beating the Packers was enough to raise them, but the Titans then destroyed them. A nice rebound over the Texans and now Raiders and Texans again keeps the Colts in our top ten. You never know what you’re going to get with this team, and a loss to the Steelers is why.

11. Titans 10-5 - A year after making the AFC Championship, the Titans looked poised to take advantage of a division that has lacked a true contender. Tennessee retained Ryan Tannehill and Derrick Henry, which was their bread and butter down the stretch. The Titans have had a few tough weeks and got a much-needed victory over the Ravens and followed it up with a huge win over the Colts. They followed that up with a bad performance against the Browns — it's been up and down for Tennessee.

12. Browns 10-5 - The Browns’ now sit at 10-5 after a tough loss against the Jets. They have struggled against their own division, but they know their identity and are certainly a playoff team — and not one I would like to play.

13. Rams 9-6 - In a year where the Rams were expected to take a step back after losing many pieces after last year, the Rams have turned heads in 13 weeks. The Rams have swept the NFC EAST and lost to the Bills, 49ers, Miami, and now the Jets. These Rams have also whooped the Bears, gave the Seahawks a loss, and beat Brady and the Bucs. The Rams are really looking complete as of late, or so we thought before the 49ers beat them. But a rebound against the Cardinals and New England leaves them in first in the West. Losing to the Jets and then Seahawks bumps the Rams out of our top ten.

14. Bears 8-7 - The Bears are back in our top 15 after three nice wins over the Texans, Vikings, and Jaguars — and four straight 30 point or more games. This offense looks as good as ever, and the Bears are winning games because of it.

15. Cardinals 8-7 - The Cardinals are back in our top 15 after a strong win over the up-and-coming Giants and Eagles. The Cardinals’ lost a tight one to kick them out of playoff contention and need a win this week to get in.