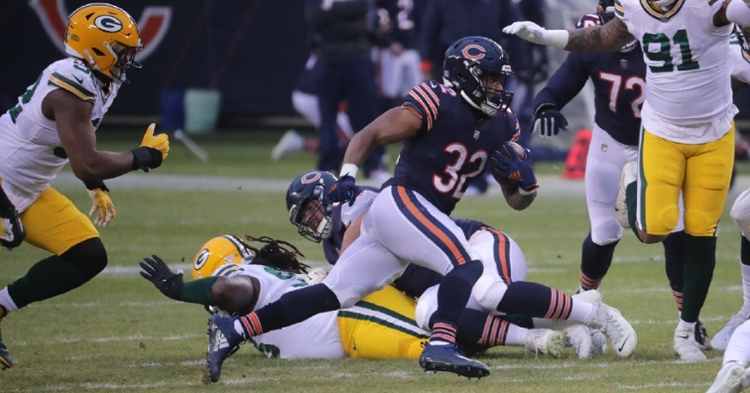 CHICAGO — Despite falling to the Green Bay Packers (13-3) at home to close out the regular season on Sunday, the Chicago Bears (8-8) lived to fight another day, thanks to the Los Angeles Rams (10-6). The Rams defeated the Arizona Cardinals (8-8) in Week 17, meaning the Bears, who held the tiebreaker over the Cardinals for the final playoff spot in the NFC, earned a trip to the postseason.

As for the Packers, who defeated the Bears 35-16 at Soldier Field to complete a season sweep of their archrivals, they wrapped up home-field advantage and will serve as the No. 1 seed in the NFC. The Bears, who are the NFC's No. 7 seed, jumped out to a 7-0 lead by scoring a touchdown on the opening drive, but Green Bay outscored Chicago 21-6 in the second quarter and went on to win fairly comfortably.

Bears, touchdown: The game got off to a rather interesting start, with a challenge taking place following the opening kickoff. Cordarrelle Patterson intentionally fielded the kick while standing out of bounds in order to draw a penalty that would allow the Bears to start their drive at the Chicago 40-yard line. Packers Head Coach Matt LaFleur challenged the call, thinking that Patterson first touched the football while inbounds, but the call stood.

The Bears proceeded to drive 60 yards to the house for their lone touchdown of the day. The 14-play opening drive ate up 7:29 of game clock and culminated in David Montgomery lunging across the goal line for a two-yard score. Earlier in the possession, Montgomery left the game after suffering a knee hyperextension but returned to action soon afterward.

And he's back in and looks fine

Packers, touchdown: The Packers responded with a similar touchdown drive that consisted of 12 plays and lasted 7:36. Aaron Rodgers and Aaron Jones teamed up for a third-down conversion in Bears territory, with Jones eluding tackles en route to picking up 15 yards after catching a short pass. Roquan Smith suffered an elbow injury during the possession and remained out for the remainder of the game. The Packers opted to go for it on fourth-and-3 at the Bears' 23, and Davante Adams drew defensive pass interference, the Bears' sole penalty of the tilt. Green Bay then set up shop at the 7-yard line, and, two plays later, Robert Tonyan caught a three-yard touchdown pass thrown by Rodgers.

Bears, punt: Chicago moved the chains before Christian Kirksey sacked Mitchell Trubisky for a loss of four yards. The Bears punted a few plays after that and took advantage of a corresponding turnover. Demetrius Harris forced Tavon Austin to fumble on the punt return, and DeAndre Houston-Carson recovered the loose ball.

Back-to-back weeks with a sack for @Kirko58! #GBvsCHI | #GoPackGo

Bears, field goal: Beginning the possession at the Green Bay 20, Chicago failed to pick up a first down, resulting in Cairo Santos kicking a 30-yard field goal.

Packers, touchdown: Green Bay wasted no time in taking the lead. On the third play of the drive, Marquez Valdes-Scantling broke free in the secondary and cruised into the end zone after catching a perfectly placed pass from Rodgers. The 72-yard touchdown gave the Packers a lead that they did not relinquish.

Bears, fumble: On the second play of the drive, Cole Kmet caught a short pass and fumbled while being tackled. The Packers recovered the football, and, following a replay review, the fumble ruling was upheld. The replay official determined that Kmet fell onto a defender before losing control of the pigskin and was therefore never down while in control of it.

Packers, touchdown: Starting at the Chicago 22, Green Bay advanced to the 7 before offensive holding was called on first-and-goal. Rodgers was not deterred, however, as he threw a 13-yard touchdown pass to Dominique Dafney two plays later.

Bears, field goal: Kmet made up for his fumble by making a six-yard catch on third-and-5. On a fourth-and-1 play near midfield, Trubisky picked up two yards via a quarterback sneak. Former Bear Adrian Amos forced a fumble while tackling Montgomery and recovered it. However, the Packers were flagged for being offside on the play, allowing Chicago to maintain possession. Montgomery proceeded to gain 14 yards and 10 yards on back-to-back pass plays. On first-and-goal from the 9, Trubisky was nearly picked off on a risky throw to the end zone. With just six seconds remaining in the second quarter, Bears Head Coach Matt Nagy opted to play it safe and attempt a field goal on second down. Santos split the uprights with a 27-yarder.

Packers, end of half: The first half ended on a Green Bay kickoff return.

Packers, punt: Tonyan hauled in a 15-yard reception, but Khalil Mack halted the Packers' progress by sacking Rodgers for a loss of three after Barkevious Mingo tripped the superstar quarterback. A punt soon followed. During the drive, Valdes-Scantling dropped a surefire touchdown after once again getting behind the Bears' secondary.

Bears, field goal: A few plays after Kmet caught an 11-yard pass, the Chicago offense pulled off its first explosive play of the game, with Rodgers completing a 53-yard bomb to a leaping Mooney. Mooney's reception moved the Bears to the Packers' 9-yard line, but Chicago then stalled out. Santos set a franchise record by kicking a 20-yarder, which marked his 27th consecutive made field goal, a new Bears record.

Packers, punt: Green Bay suffered its only three-and-out of the day. Mingo nearly intercepted Rodgers while breaking up a short pass on third down.

Bears, turnover on downs: Allen Robinson finally got in on the action by catching a 14-yard pass for his first reception of the contest. The Bears' offense stayed on the field for a fourth-and-1 at the Packers' 46, and Mooney made a two-yard catch to keep the drive alive. On the next set of downs, the Bears faced fourth-and-inches, and Trubisky converted with a one-yard sneak, which was aided by the Bears seemingly getting away with an uncalled false start. Yet another fourth-and-1 situation came about on the ensuing set of downs, but the Bears were unable to extend their streak of successful fourth-down conversions, as a Trubisky pass was broken up — and almost picked off — by Chandon Sullivan.

Great effort by Darnell Mooney but he paid for it at the end.pic.twitter.com/p40adNMxtr

Packers, touchdown: The Packers' second-half offensive lull ended on this drive. Kindle Vildor nearly intercepted Rodgers when a pass slipped through his hands. Green Bay took advantage of the reprieve, with Rodgers then completing a nine-yard pass to Adams on third-and-7. Jones scampered for 17 yards after nabbing a short pass, thus placing the Packers in the red zone. Allen Lazard recorded a 14-yard reception, and Jones punched the ball into the end zone by way of a four-yard touchdown carry.

Bears, interception: Trubisky took a chance by throwing downfield to a well-covered Kmet, and Amos made Trubisky pay by picking him off at the 50-yard line. Amos returned the interception to the Chicago 26.

Bears, end of game: On the final possession, Trubisky completed a 12-yard pass to Montgomery and a 23-yard pass to Robinson. Robinson's catch was a highly impressive one-handed snag made while the super-talented wideout warded off a defender. Trubisky brought forth first-and-goal via a 13-yard scramble. Former Packer Jimmy Graham hauled in a three-yard pass on the last snap and had his forward progress stopped short of the goal line by Jaire Alexander. Time expired shortly after the play was blown dead, thus concluding an eventful, up-and-down regular season for the Monsters of the Midway.

Up Next: In the NFC Wild Card Round, the Bears will square off against the New Orleans Saints (12-4), the NFC's No. 2 seed. New Orleans defeated Chicago 26-23 in a Week 8 overtime battle at Soldier Field. This time around, the Saints will host the Bears at Mercedes-Benz Superdome in New Orleans on Sunday, Jan. 10. The domed affair is scheduled to kick off at 3:40 p.m. CST, when the Bears will be gunning for their first playoff victory since Jan. 16, 2011.