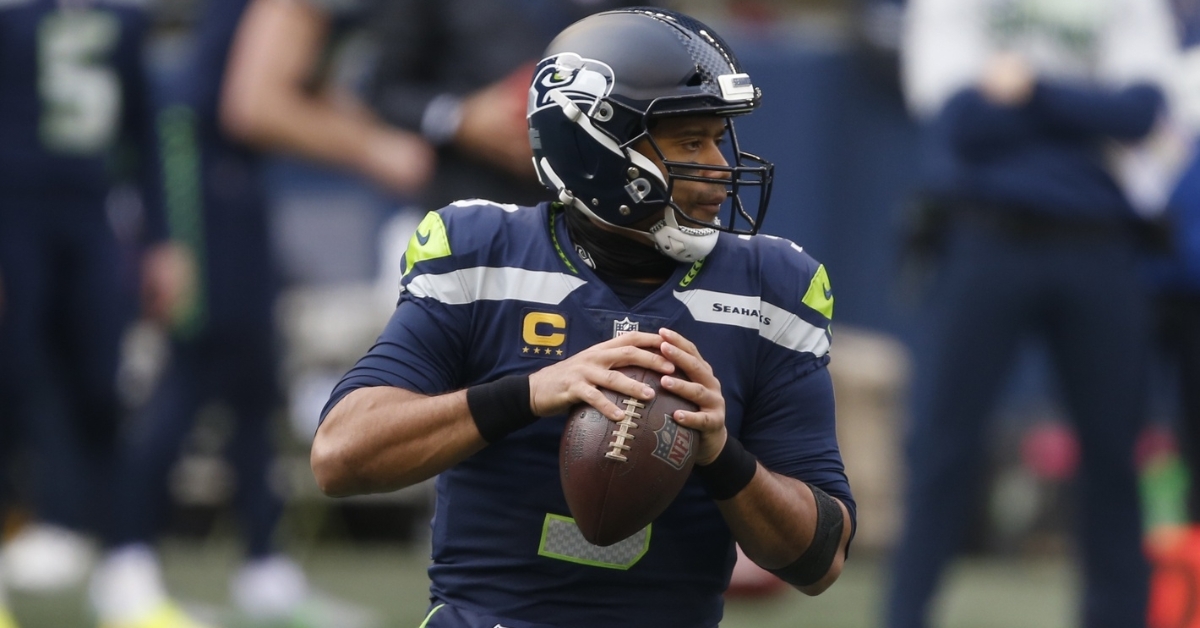 Just when you thought the quarterback drama this offseason was over, another bombshell could be in the making. While Deshaun Watson continues to steal the headlines regarding his future in Houston, it has been another elite quarterback that could be hinting at a trade after a nine-year run with his current team. That quarterback is Russell Wilson, as his agent has begun talking to Seattle about possible trade destinations.

A year ago, Wilson's name never would have been brought up in trade conversations. After all, he has been one of the best QB's in the league the past nine seasons and was off to an MVP caliber start through the first half of the 2020 year. Then, Wilson began to struggle as his protection continued to worsen, forcing him into bad decisions. Along with that came the constant being hit in the backfield, which has rubbed Wilson the wrong way.

Since the start of the 2015 season, only Watson has been hit more than Wilson. Wilson is starting to voice his displeasure about that. Yes, Bears fans, as bad as the Chicago offensive line has been, several units in the league are in a worse position. Wilson has gotten so sick of being hit that he went to the front office to discuss how to protect him better and make the offense better.

Instead of listening and taking what he said into consideration, they appeared to ignore what he was talking about, which led to him storming out of the room. That sounds very similar to the Watson situation where management is ignoring anything Watson suggests. While Wilson is clearly a little unhappy at the moment, he hasn't requested a trade at this point, but that hasn't prevented his agent from talking to Seattle about possible destinations.

"Several high-ranking people I've spoken to believe [a Russell Wilson trade] is an inevitability, maybe not this off-season, but next off-season because of the growing tension that isn't right now, it's been a couple years."

The Raiders, Saints, Dolphins, and Jets appear to be the four teams mentioned but don't count out the Bears, who Wilson said himself would be a destination of choice. Apparently, after hearing that, the Bears are starting to show some interest in the situation as they appear to be the ones most actively calling about the situation.

Chicago wants to improve the QB position, and Watson was the guy they wanted. However, if Wilson becomes available and has listed your team as a destination he would choose, you better put your focus into him and figure out how to get something done. Wilson is an elite QB and would be stepping into a team that will give him the best defense he has had since his Superbowl days.

However, the offensive line isn't much better than Seattle's, and the offense itself has struggled to put up points consistently. So why would he list Chicago on a list of teams he would go to? Well, for starters, the Bears pitched the idea of their major market for his wife and recording artist Ciara. Secondly, the Bears have a playoff-caliber defense who would instantly become Superbowl contenders with a better quarterback under center.

Finally, adding a guy like Wilson would be a massive move for this franchise.

Wilson is beloved by his teammates and the league, so bringing him to Chicago could help lure players that want to play with him. It could be like the Tom Brady situation last season where he could attract players to Tampa to win another ring.

I know many people think Wilson's career would be ruined if he came to Chicago, but keep in mind this is a team that made the postseason twice in the last three years and won 28 games with Mitch Trubisky under center. A lot of that has to do with the defense's play, but how many more games could they have won with Wilson?

Across his nine NFL seasons, Wilson has been as consistent and reliable as they come. Not only does he complete 65% of his passes, but he is coming off a career-high 68.8% completion percentage this past season while throwing for 4212 yards, the second-highest of his career. Wilson also threw a career-high 40 touchdowns this past season, his first time reaching that mark and throwing a career-high 13 interceptions.

For his career, Wilson has now thrown for 33,946 yards, 267 touchdowns, and 81 interceptions. He also uses his legs as well as anyone rushing for 4506 yards and another 21 scores. Wilson has proven to be elite and has a few elite years left in him. Wilson said he would play for the Bears, and that is huge. It is the type of move Ryan Pace should make to change this franchise forever. Where there is smoke, there is fire, and this is certainly something to monitor.