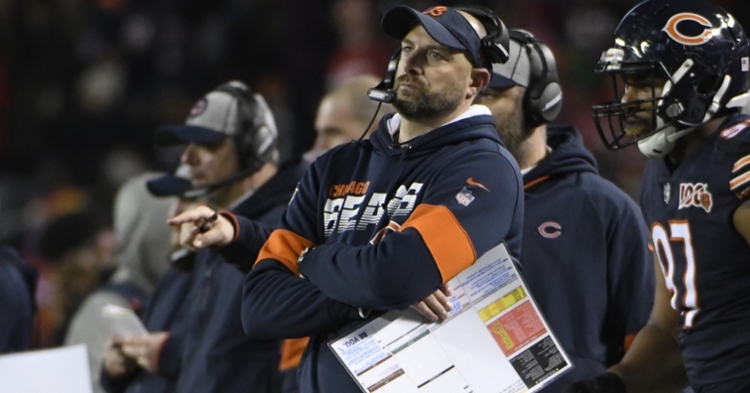 Now that the Bears season is over and that the offseason has begun, we can start to look back at what went right and what went wrong during the season. For the most part, Chicago put out another competitive football team that was involved in countless close games.

The difference between this season and last year, however, was that Chicago found a way to win the close games last year while this year, they were on the wrong side as much as the winning side. That was one of the main reasons why they went from a playoff team in 2018 to missing out this year.

The lack of consistency was disappointing, the injuries were alarming, and Chicago decided to shake things up immediately by letting several of their positional coaches go in hopes of sending a message to the entire organization. With that being said, I still think the Bears are in a good position to succeed next season if everyone is on the same page from the start. Here is how I would grade the coaching staff this season.

Special Teams Coach Chris Tabor: What looks like a return for a third season with the team next year, Tabor is in his second stint with the organization after previously coaching them back in 2008-10. Before returning to Chicago, Tabor was in the Cleveland Browns organization, where he acted as their special teams’ coach.

After Cody Parkey put together an awful 2018 season, many people believed Tabor might be on the way-out last season. Instead, the Bears brought in a pair of kickers during the preseason in which Tabor watched over to see who had a better chance at winning the job. With his input, Eddy Pinero was selected as the team’s kicker and performed very well this season, minus a few game hiccups in the middle of the season.

Add the strong punting from Pat O’Donnell, great kick returns from Cordarrelle Patterson, and decent coverage on both kicks and punt, and the Bears special teams’ unit was vastly improved from a season ago. Yes, special teams’ coaches don’t get a ton of credit, but if I were to give him a grade, he gets a B in my book mainly because he helped groom a reliable kicker.

Defensive staff (Chuck Pagano): After Vic Fangio put together one of the best defenses in the league over the past four seasons, it was time for a change as he took the Denver Broncos head coaching job this past spring. In comes long time defensive coordinator and former Colts Head Coach Chuck Pagano as he was hoping to keep the Bears defense near the top of the league.

Things didn’t get off to the best of starts, although a solid 3-1 record as the defensive side of the ball was good, but not great. Then the injuries started to pile up as the Bears began to struggle mightily on defense, losing five of their next six to put them in a hole in the NFC. That proved to be a blessing in disguise for the unit.

As we reached the final six games of the season, not only were the Bears getting healthy on defense, but they were playing the best football of the season and becoming a much deeper unit. A lot of the reserves that saw so many significant snaps now proved they could be legitimate starters and contributors in the league moving forward, which is a vast improvement. It was also on this side of the ball that helped the Bears climb back into the playoff hunt before being eliminated in week 15.

Grade B: Some people may think this is a little high, but the Bears did rank in the top 10 defensively once again with a new coordinator at the helm. They also did this with a lot of their key pieces missing time throughout the season, which shows you the type of Coach Pagano can be. Chicago was not able to force as many turnovers or sacks as in the past, but they were still stingy enough to limit opponents who will continue to be huge going forward.

Offensive staff (Mark Helfrich): Perhaps the biggest disappointment on the team was the entire offensive side of the ball, which led to several coaches getting fired, including coordinator Helfrich. Brought in from the University of Oregon, Helfrich was known as an offensive mastermind who brought a lot of creativity with him to the field.

Yes, that creativity showed at times in games, but the results never seemed to follow. Over the past two seasons, which includes 33 games, the offense has been held to 20 points or less 22 times. That is 66% of their games, which simply is not going to get it done lone term. Yet, Chicago has won 20 games over the past two seasons, which ties them with Green Bay for most in the division as the defense bailed out the offense several times.

With the amount of talent on this side of the ball, there is no excuse as to why the offense continues to struggle, and it was a big reason why Helfrich will not be retained next season. Chicago will now look to revamp that offense with a new man in charge next season.

Season Grade D: Sure, there were some positive signs with the growth of players, but the fact remains that this side of the ball is in shambles. There is no excuse for a team with this much money added to offense through free agency continues to struggle to break the 20-point mark. If it weren’t for the defense, this team would struggle to win six games in each season. Let’s see what they have in store next year.

Head Coach Matt Nagy: Nagy drew his share of criticism this season regarding the offense and rightfully so. The former Kansas City Coordinator and offensive mastermind pushed all the right buttons in 2018, which led the team to their first division title of this decade. This season was far different as the killer instinct, consistencies, and just overall injuries piled up way too much leading the Bears to a third-place finish at 8-8.

Some of the things that did go right for Nagy was the development of Mitch Trubisky as the season went on, proving that Nagy does know what he is doing regarding QBs. Trubisky still struggled at times, and play calling was head-scratching, but Trubisky also played the best football of his career the final two months, which is a credit to what Nagy did to make him feel comfortable.

The next step is for Nagy to continue to build off that by putting in a system that not only revolves around Mitch but makes him comfortable on every play. Should that happen, and his development continues, the sky is the limit for this team offensively.

Season Grade C+: After receiving an A + grade last year, Nagy took a step back this season to receive a C+. A lot of that can be attributed to the significant injuries this team went through, but the bottom line was the team lacked consistency, which fell on Nagy. Through one ten-game stretch this season, the Bears were 7-3 and looked like a top team in the NFC. The other six games saw Chicago go 1-5, which cant happen if you want to make the playoffs.

Had Nagy been able to find consistency all season, I firmly believe that Chicago would have been in the post season again. Since that didn’t happen, Nagy needs to take some blame for the team's struggles despite his 20-12 mark as head coach. Next season will be the telling year if Nagy is the man for the job or not. Was this season a sophomore slump for the Coach, or will he be nothing more than a .500 type coach?