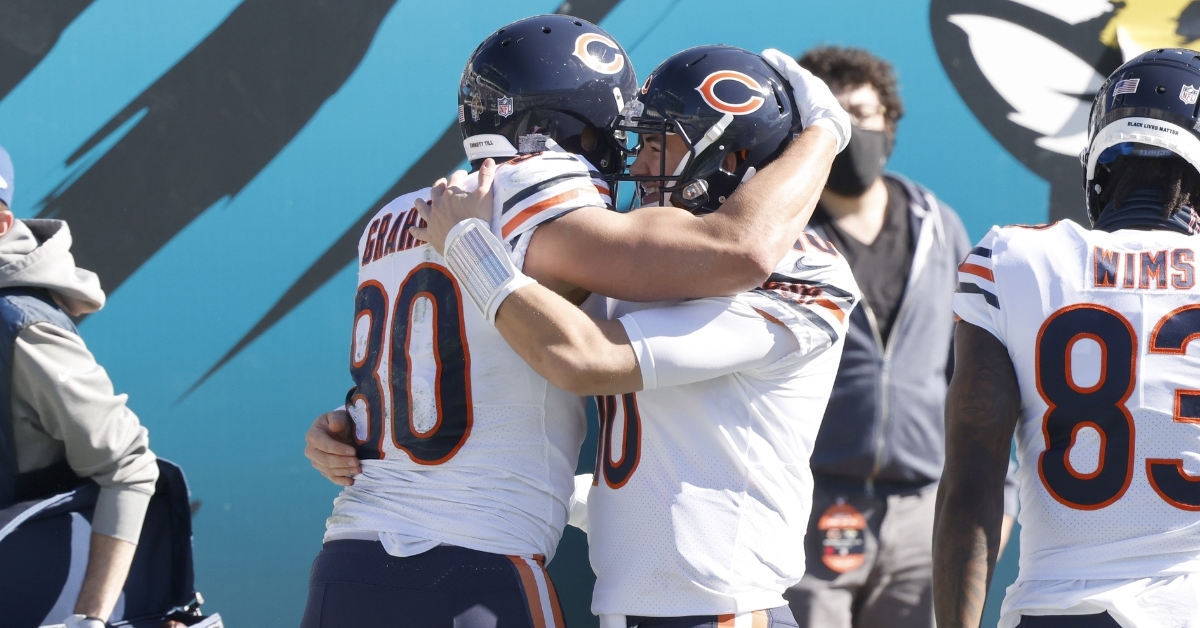 Alright, Bears fans, you got what you wanted. Against all odds, the Bears have not only turned their season around at the perfect time but have jumped back into the final postseason spot with one week to go. Chicago is in an excellent position to make the postseason once again as they now control their destiny.

Already controlling their destiny, the Bears knew they needed to win out and get a little help if they wanted to get into the postseason. Chicago has done their part by winning their last three but was finally awarded the help they were looking for this weekend. The question now becomes how valuable that will help be.

Chicago could be the first team in NFL history to have two three-game winning streaks and a six-game losing streak in the same season. That may not be the consistency this team has been looking for, but ultimately it all comes down to the postseason, and Chicago is right in the mix with one week to go.

Here are three takeaways from the win against the Jaguars on Sunday:

Thank you, San Francisco: Well, for starters, the Bears knew things were sitting pretty before their game even started Sunday. That was courtesy of the San Francisco 49ers, who upset the Cardinals Saturday afternoon. They managed to do so despite former Bear Robbie Gould giving his best effort to give the game to Arizona, but it never happened. Chicago should now be sending Christmas cards to the 49ers organization as they gave the Bears the help they were looking for.

That loss coupled with the Bears dominating performance this past weekend now has Chicago sitting in the final playoff spot with one game to go. The message is simple for the team this week. Win, and you're in. The Bears would rather take care of their own business by winning instead of hoping to see if the Cardinals lose to the Rams this weekend.

Considering Jared Goff broke his thumb against Seattle yesterday, Arizona has a much better chance of knocking off the rams, especially considering they are already in the postseason. That leaves the Bears with the challenging task of knocking off Green Bay as the Packers will be playing for the No.1 seed. Get ready for a good ole fashion black, and blue game as tons will be on the line.

David Montgomery makes history: Bears fans witnessed history on Sunday, as David Montgomery accomplished something that hasn't been done in Chicago since 1977. Montgomery became the first Bears player to accumulate 100 scrimmage yards and a touchdown in five-straight games since 1977.

Considering what Montgomery and the Bears' rushing attack looked like six weeks ago, it is incredible to see him not only surpass the 1000-yard mark but to be putting the numbers he is. It took nearly two years for Montgomery to come into his own, but Chicago is starting to witness firsthand how good of a back he can be.

Viewed as a third-round steal in the 2019 NFL draft, Montgomery was graded out as one of the best running backs in that class. It was a huge surprise to see him fall out of the second round and even a bigger surprise to see him land with Chicago. Now that he has taken over the primary back role, the Bears have their first true running back since Jordan Howard's early days or even Matt Forte. Montgomery is just scratching the surface of what he can become.

Roquan Smith leads the way: For the most part, the Bears defense has carried this team all season, but that has not been the case lately. A few weeks ago, apart from the Houston game, this Bears defense had been struggling and will need to be at their best against Green Bay next week.

Seeing how they played against the Jaguars this week gives fans hope they can contain the Packers enough to provide the offense with a chance to score points. If the Bears want to continue to win games and get that final postseason spot, Smith needs to continue to be the leader he is. Despite Khalil Mack often being considered the most important piece on defense, Smith is the leader and was the MVP on Sunday.

Not only did he set the tone on defense, but his two second-half interceptions also helped the Bears take what was a close game and flip it into a blowout. These are the types of breaks that the Bears had going against them when they were losing, and now, they are getting those breaks. Chicago controls their playoff fate this week, and they better be ready for Green Bay after what the Packers did to them the first time around. You can bet Smith and the defense are looking for revenge.

#UGA legend Roquan Smith with two INTs today. One of the best overall defenders in the NFL. pic.twitter.com/oO0lgSEXy0