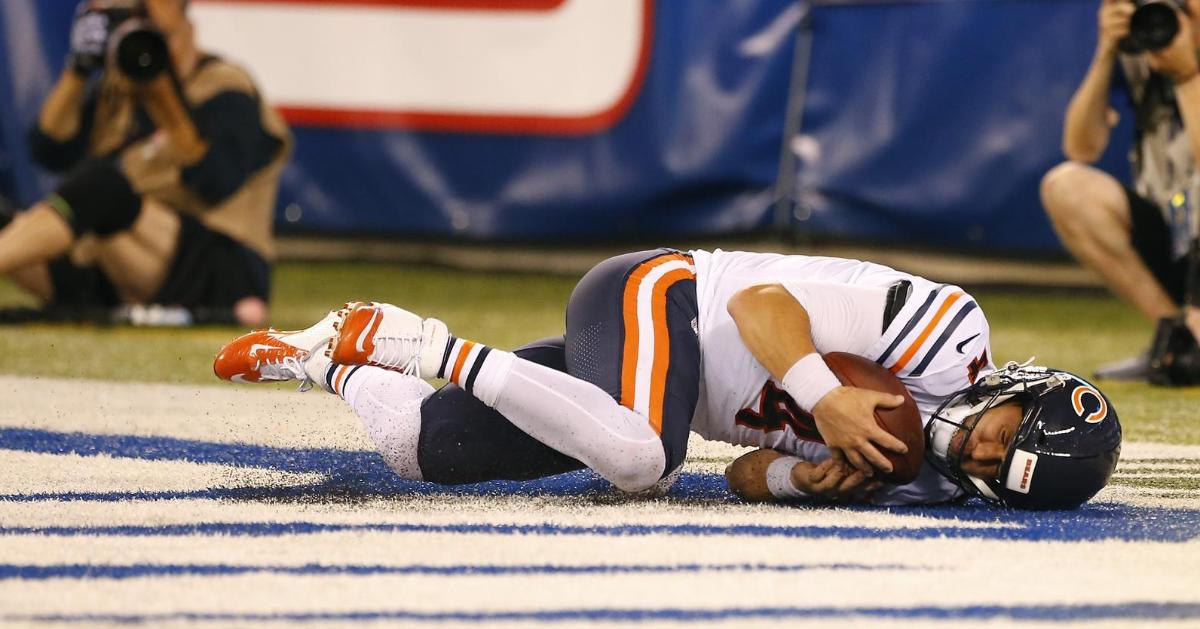 Chicago Bears quarterback Chase Daniel was forced to give himself up for a safety as a result of a botched snap. (Credit: Noah K. Murray-USA TODAY Sports)

EAST RUTHERFORD, N.J. — In a Week 2 matchup of the NFL preseason that saw the Chicago Bears (0-2) rest many of their starters, the New York Giants (2-0) dominated the Bears at MetLife Stadium en route to collecting a commanding victory on Friday. The Giants racked up 411 yards while the Bears amassed a modest 165 yards, and the Giants garnered 14 more first downs than the Bears. In the end, the Giants won 32-13, as the Bears never led.

Bears starting quarterback Mitchell Trubisky did not see the field on the night. Instead, Chase Daniel handled the majority of the snaps under center for Chicago. Daniel went 12-for-18 for 103 yards but failed to engineer a touchdown drive. The Bears' lone touchdown came on a 1-yard carry by rookie running back Kerrith Whyte Jr. in the third quarter. Earlier in the action, Whyte had a 103-yard kickoff return to the house called back because of a holding penalty.

The Giants took an early 7-0 lead via an opening drive that milked over six minutes off the game clock. Veteran Giants gunslinger Eli Manning capped off the 79-yard march down the field with an 8-yard touchdown pass to wide receiver Bennie Fowler III. Rookie quarterback Daniel Jones replaced Manning after the first series and made several solid throws. However, Jones fumbled twice, and both fumbles were recovered by the Bears. Chicago forced three turnovers, including an interception in the end zone by rookie cornerback Clifton Duck, which Duck returned 62 yards.

Duck's lengthy runback culminated in Whyte's aforementioned score. The other six points tallied by the Bears came from field goals by kicker Eddy Piniero, who connected on a 41-yarder and a 27-yarder, respectively. Piniero is currently engaged in a kicking battle with fellow Bears kicker Elliott Fry, and Fry, who made the Bears' lone extra-point attempt, missed his sole field-goal try of the evening, as he kicked a 47-yard attempt wide left.

Daniel suffered an embarrassing safety when he was unable to corral a snap late in the first half and wound up intentionally falling on the football in the end zone, thus providing the Giants with a 12-3 lead. The Giants proceeded to go up 19-3 soon afterward, with Jones throwing a 15-yard touchdown pass to wide receiver T.J. Jones. After Whyte crossed the goal line to pull the Bears to within six, the Giants responded with a 60-yard touchdown drive that was punctuated by a 10-yard rushing score by running back Jon Hilliman.

The final scoring play came on a 10-yard pass from Giants quarterback Kyle Lauletta to Giants tight end Garrett Dickerson just over midway through the fourth quarter. In the 32-13 loss, the Bears committed two turnovers, both of which were fumbles by wide receiver Taquan Mizzell. Bears defensive end Jonathan Bullard and Bears linebacker James Vaughters each recovered one of the Giants' two lost fumbles, and Bears quarterback Tyler Bray went 6-for-13 for 53 yards and manned the Bears' third-quarter touchdown drive.