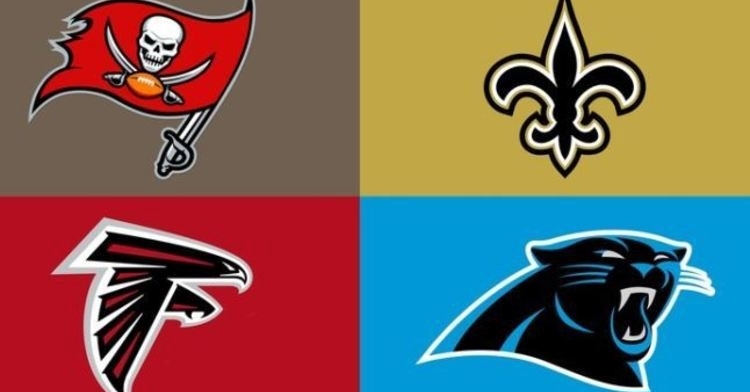 When you look at longevity among NFL franchises, the NFL South has one of the younger divisions as all four teams came into the league after 1960. Add in the Buccaneers in 1976 and Panthers in 1995 and you have an even younger division.

While overall youth among NFL franchises is certainly a focal point in the NFC South, that division has also had their fare share of success in seasons past with every team playing in the Superbowl at least once and Atlanta making it twice with New Orleans and Tampa Bay walking away with the two championships from that division. Here is how the Bears have stacked up against the NFC South.

ATLANTA FALCONS: One of my favorite teams growing up as a kid was the Atlanta Falcons mainly because of their 1998 run to their first Superbowl. I loved Jamal Anderson and his dirty bird celebration and when the Falcons drafted Michael Vick, I was very intrigued. Outside of those moments, I have not been a huge fan of the Falcons but respect their franchise.

For a team that didn’t start play until the 1960s, these two have met a fair amount with the Bears holding the slim edge 14-13. The first meeting between the two came in 1966 with the Bears not only winning that game 23–6, but winning the next game also. Following that, Chicago didn’t have much luck with Atlanta as the Falcons won nine of the next 11 meetings to take a commanding lead in the series.

Since that stretch by the Falcons, the Bears have owned this series winning 10 of their last 13 games, including six straight from 1985 to 1993. Even with their recent domination of the Falcons, we are going on six years since the Bears last beat Atlanta as they topped the birds 27-13 on the road in 2014. Atlanta took their last meeting in Chicago in 2017 23-17 which was their first win at Soldier field since 1983.

CAROLINA PANTHERS: One of the newest and youngest franchises in the game, the Panthers officially took to the field in 1995 to begin as the leagues' 30th franchise at that point. From that point forward, they have been one of my favorite teams considering I have always loved that black cat logo and the colors associated with their jersey.

Carolina has had some ups and downs as a franchise but has made it to two Superbowl’s as a franchise losing both to New England and Denver. Still, the Panthers' overall success as a franchise is no joke and they have given the Bears their fair share of fits over the days, but Chicago still has managed to come out on top more often than not going 6-4 against them thus far.

These teams met for the first time in 1995 in-game in which the Panthers gave the Bears all they could handle, but it was Chicago coming out on top 31-27. The teams went on to split the first four games between the two before Carolina took a 3-2 series lead. Since then, it has been All Chicago as they responded with three-straight wins from 2010-2012 and have won four of the last five in the series.

Their latest win came in the team’s last meeting in 2017 when the Bears relied on their defense to stop Carolina 17-3 at home. These teams are expected to meet again this season should the season be played on time.

TAMPA BAY BUCCANEERS: For a team that didn’t come into the league until the 1970s, these two teams have met a ton as they were in the same division up until 2002. For the most part, it has been all Bears as they have nearly won twice as many games as Tampa leading the overall series between the two 39-20.

The domination started right from the start with the Bears winning the team’s first-ever meeting 10-0 in 1977 and six of the first eight meetings altogether. Chicago really grabbed a hold of this series in 1983 when they went on to win 12 consecutive games against the Bucs lasting until 1988. Tampa then went on to win the next two meetings before the Bears won five straight times on two separate occasions in the 1990s.

Since leaving the division in 2002, the Buccaneers have fared much better against Chicago, as the Bears have gone just 6-5 in their last 11 meetings. Chicago put an end to a mini two-game losing streak in the teams' last meeting in 2018, in which the Bears managed to top the Bucs 48-10 in one of the more one-sided games of this series.

NEW ORLEANS SAINTS: There are a lot of teams I dislike in the NFL. However, the one team I despise the most in all of football is the New Orleans Saints. Ever since the 2009 season and into the 2010 NFL playoffs when the whole bounty hunting scandal came when the Saints appeared to purposely try and injury not only Kurt Warner but Brett Favre also, I lost complete respect for that team. It was almost as if they had to cheat to win the Superbowl and frankly that is just wrong on so many levels.

This is the only team in the NFC South that has managed to deliver a winning record against Chicago as the Bears are just 15-16 against New Orleans. This series started back in 1968, with the Bears winning the first three games and five of the first six. For the most part, this series has been even since about the 1970s, but the Saints got things rolling in 1992 winning six of eight during that time until 2003 to take the lead in the series.

Chicago responded with four straight wins from 2005-through 2008, but it has been all New Orleans since the Bears are going on 12 years since they last beat the saints in 2008. In their last meeting this past season in Chicago, the Saints high powered offense was more than enough to top the Bears as they picked up their fifth straight win against Chicago 36-25 to retake the series lead.

Overall record against division 74-43: The Bears have dominated the NFC South for a while now and it shouldn’t come as a surprise to anyone. This division historically hasn’t a ton of long-term success and it has shown in the overall results. Except for the Saints who have had the Bears number as of late the Bears have continued to own this division and are hoping they can do that once again this season when they meet all four teams again.