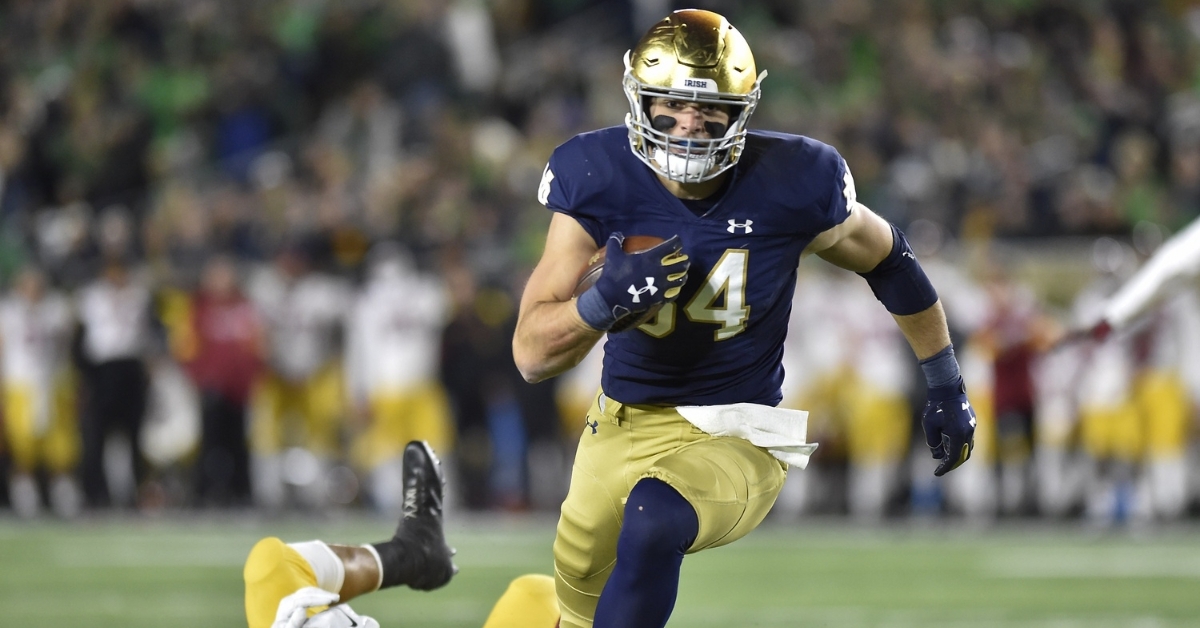 Heading into the 2020 NFL Draft, the Bears were thin on picks having just five to work with at the time. Knowing they needed to hit on all of them to have a great draft, Ryan Pace wheeled some in draft trades to acquire three more picks but later traded one of those back away. In total, the Bears still picked up a pair of extra picks to give them seven new players on the roster. Add that to the eight undrafted free agents that chose to head to Chicago, and the Bears have 15 new players heading to the Windy this week.

Over the next few weeks, we are going to look at each of Chicago’s new draftees and undrafted players one at a time and dive into why they make a good fit and what to expect from them going forward. We will start with the drafted players before diving into the undrafted signees Chicago picked up.

COLE KMET (TE Notre Dame): Already with nine TE’s on the roster, the Bears are going to have to seriously downsize that position before the season starts as there is simply no need for that many TE’s on a roster. After releasing Trey Burton who recently signed with the Colts, only off-season acquisition Jimmy Graham has any success at that position meaning the Bears need to find an option for the future.

Chicago wasted no time in doing just that by drafting one of the best TE’s in this year’s class with their first pick and No. 43 overall in Cole Kmet out of Notre Dame. This name shouldn’t come as a surprise to you as his name has been floating around with the Bears for weeks now, but most people had him going at 50, not 43. I am pleased to see him on this Bears roster, but I am surprised to see him go 43, but doubt he would have been there at 50.

Kmet, isn’t your prototypical TE size-wise, as he weighs 262 LBS and stands 6-6. Not only that, for his size, but Kmet can also move as he was clocked at a 4.70 for his 40 time, which makes his good downfield threat along with someone who can run. Kmet was a dual-sport athlete for the Fighting Irish in both football and baseball but stopped playing baseball following his freshman season.

After not seeing a ton of action up until the 2019 season, Kmet has come into his own over the past two years for Brian Kelly, which is why his stock rose to where it did. Over the past two seasons, not only has Kmet been thrown into a starting role, but he has become one of the best pass-catching TE’s in this draft, which is certainly something the Bears are hoping will carry over to the NFL game.

Along with his smooth release off the line of scrimmage, Kmet is huge for a TE and brings some good speed also which ultimately could make him a matchup nightmare for linebackers. He can stretch the field vertically, while also showing good hands to make catches in traffic to move the chains consistently. Although he does have good hands, Kmet tends to drop a few passes, but makes up for it with his ability to catch in traffic. Add in that he is a solid run blocker, and he is a perfect fit for Chicago long term.

Along with the good does come some bad as his injury history certainly could be a concern going forward if he can’t stay healthy. Overall a good blocker, if left alone to block 1v1, Kmet has the tendency to get beaten quite frequently, which makes him more of a help blocker than an actual blocker. That is something that he certainly needs to work on.

After totaling a total of just 176 yards and zero scores over his first two seasons, Kmet busted out as a junior for the Irish to post 515 yards on 43 catches and six scores. Given his play last season, his red-zone presence, and his overall size and speed, I would compare him closely to that of Kyle Rudolph for Minnesota. Unlike Rudolph, Kmet can stretch the field vertically and is a better blocker, but Rudolph has better hands. However, Kmet could turn into a Rudolph type player and should see significant time next to Graham this season as he is already the second-best TE on the roster.