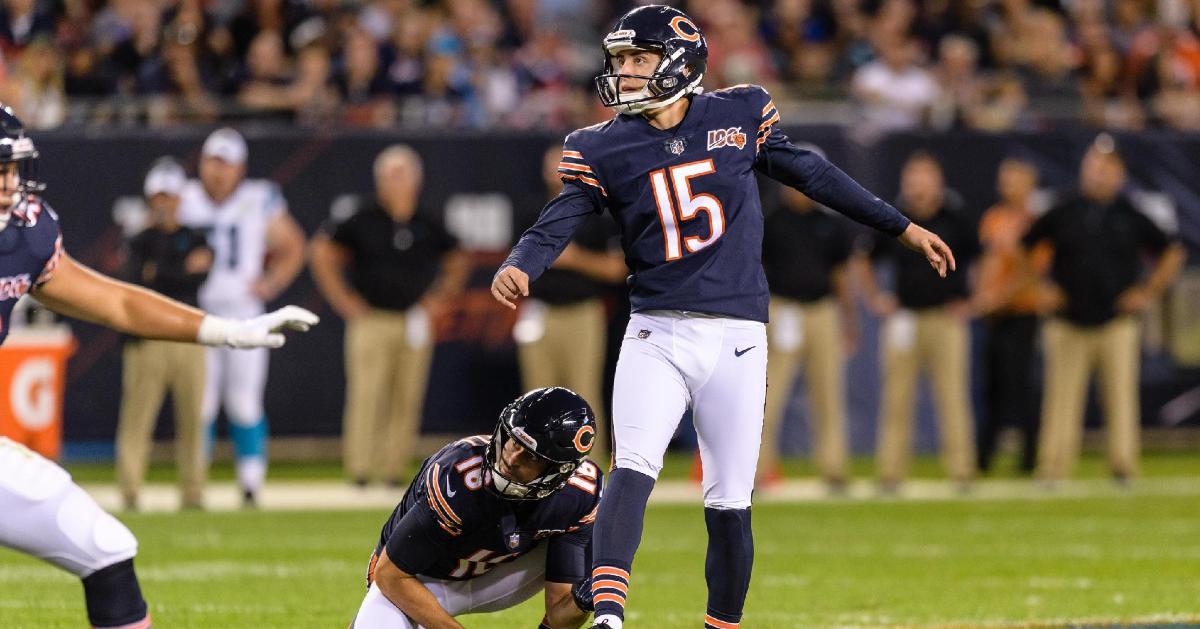 CHICAGO — After a grueling offseason for the Chicago Bears (0-1) that was assuredly filled with nightmarish memories of a brilliant 2018 campaign being marred by kicking woes, the Bears were forced to face their kicking demons yet again when a backup kicker for the Carolina Panthers (1-0) showed out at Soldier Field in Week 1 of the NFL preseason. Led by rookie kicker Joey Slye, who went 3-for-3 on field-goal attempts, the Panthers topped the Bears 23-13 on Thursday in what served as the first contest of the 2019 slate for both teams.

While Bears quarterback Mitchell Trubisky was active for the contest, he did not throw a single pass, as Chase Daniel took the majority of the snaps under center for Chicago and went 11-for-13 for 120 yards. More importantly, the anticipated debut of rookie Bears running back David Montgomery took place. In addition to scoring a touchdown on the ground as part of a 16-yard rushing performance, Montgomery caught three passes for 30 yards.

With incumbent starting kicker Graham Gano getting the night off for the Panthers, Slye made a name for himself and also might have attracted the attention of the Bears and other NFL teams in need of a reliable kicker. Slye drilled a 42-yarder and a 55-yarder in the first half to give the Panthers a 6-0 lead. On the flip side, kickers Elliott Fry and Eddy Pineiro, who are engaged in a position battle, suited up for the Bears. While Fry went 1-for-1 in both the extra-point and field-goal departments, Pineiro was 1-for-2 on field goals and did not attempt an extra point.

Fry was successful on his lone field-goal try, as he sent a 43-yarder through the uprights as time expired at the end of the second quarter. Hilariously, Bears fans in attendance excessively celebrated the kick because it happened to be from the exact same distance and a similar location as the one that former Bears kicker Cody Parkey infamously missed to end the Bears' season in a playoff loss to the Philadelphia Eagles in January. Interestingly, Panthers head coach Ron Rivera, an all-time great Bears linebacker, helped set up the field-goal kick by calling a timeout that he did not need to call. Rivera admitted following the game that, in the spirit of the preseason, he called the timeout in order to give Fry a chance to kick because he was aware of the Bears' kicking battle. As for Pineiro, he nailed a 23-yarder but missed a 48-yarder.

Prior to Fry sending the Bears into halftime with a 10-6 lead, Montgomery capped off a 49-yard drive by barreling into the end zone for a 7-yard touchdown run at the 6:58 mark of the second quarter, leading to the Bears going up 7-6. Fellow rookie running back Elijah Holyfield, who is the son of legendary boxer Evander Holyfield, scampered past the goal line for a Panthers touchdown early on in the third quarter. Rookie quarterback Will Grier connected with Holyfield for a 7-yard touchdown pass. Panthers gunslinger Cam Newton did not see the field on the night due to his continuing recovery from offseason shoulder surgery. Trubisky barely saw the field himself, as he played only the first offensive series for the Bears before being replaced by Daniel.

Following Holyfield's third-quarter score, the Panthers led 13-10, and a 29-yard field goal from Slye put the Panthers ahead by six points with 5:45 left to play in the third quarter. Pineiro chipped in his aforementioned 23-yarder midway through the fourth quarter to pull the Bears to within three, but Holyfield iced the Panthers' win by recording an 11-yard touchdown carry with 1:41 remaining. For the Bears, a pair of rookies came out of the woodwork and made significant impacts in the matchup. Tight end Ian Bunting led the Bears in receiving with 77 yards on three receptions, and cornerback Clifton Duck amassed a game-high six tackles to go along with a pass deflection.