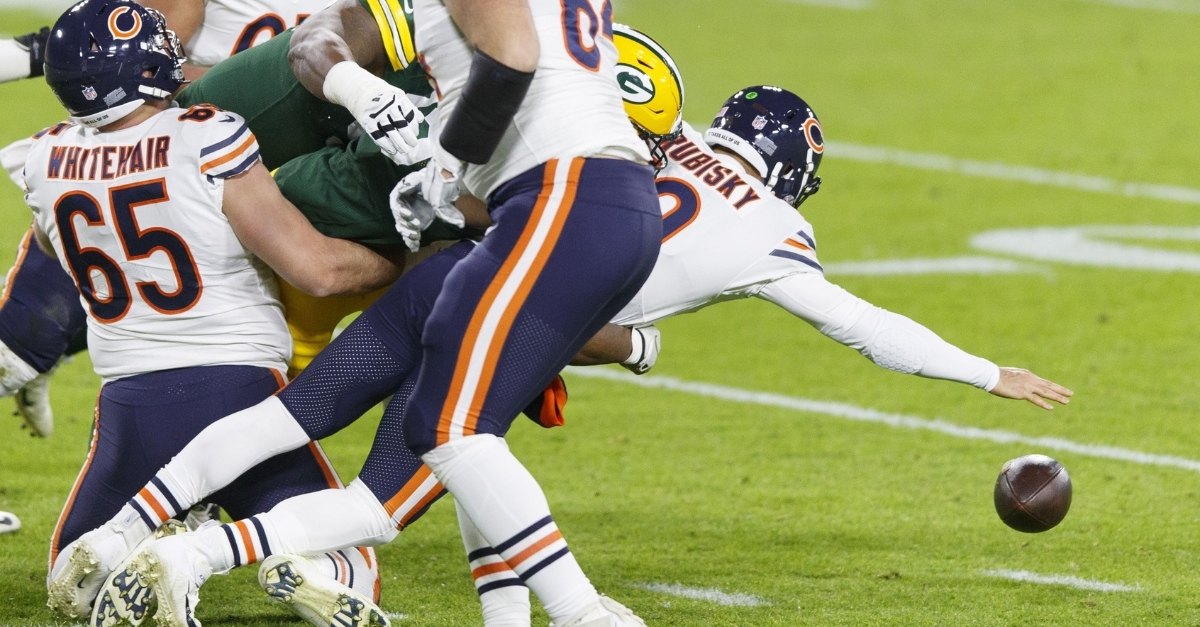 Mitchell Trubisky was picked off twice, and he coughed up a fumble that was run back for a Green Bay touchdown. (Credit: Jeff Hanisch-USA TODAY Sports)

GREEN BAY, Wis. — The deceptively close final score of the loss incurred by the Chicago Bears (5-6) to the rival Green Bay Packers (8-3) on Sunday night is not indicative of how the Week 12 contest, which was dominated by the Green Bay offense, played out. Like they have done numerous times this season, the Bears mounted a fourth-quarter comeback that made their fifth loss in a row more respectable.

Returning to the startling lineup for the first time since Week 3, Bears quarterback Mitchell Trubisky filled in for the injured Nick Foles after returning from an injury himself. Trubisky threw for 211 yards, three touchdowns, two of which came in the fourth quarter, and two interceptions while going 26-of-46. The Packers controlled the pace of the game throughout, though, and won 41-25 at Lambeau Field.

Packers, touchdown: The Packers' opening drive was quite efficient. On a third-down conversion, Allen Lazard caught a short pass and hurdled through contact for the first down. The Packers reached the Bears' 12-yard line, and an Aaron Rodgers pass to Davante Adams fell incomplete after Adams slipped and fell. Adams made up for it on the next play by making a leaping touchdown grab in the end zone. Mason Crosby's ensuing extra point carried wide right.

Bears, field goal: On the Bears' second play from scrimmage, David Montgomery broke free for a 57-yard run, his longest gain of the season. Soon afterward, Cole Kmet had what would have been a nine-yard touchdown reception knocked from his grasp. Allen Robinson was then unable to corral the football on a contested pass in the end zone that fell incomplete. Cairo Santos made a 27-yard field goal to put the Bears on the board.

Packers, touchdown: Green Bay proceeded to march down the field in short order, aided by a roughing the passer call on Bilal Nichols. Rodgers scrambled for a first down on a third-down play and capped off the drive with a five-yard touchdown pass to Marcedes Lewis.

Bears, interception: Not long after connecting with Robinson for a 16-yard gain, Trubisky, who also completed a 20-yard pass to Robinson earlier in the drive, badly overthrew Darnell Mooney. As a result, Darnell Savage Jr. intercepted Trubisky in the end zone.

Packers, touchdown: Making themselves a perfect 3-for-3 on touchdown drives to start the game, the Packers reached the end zone after tallying the aforementioned turnover. Green Bay opted to go for it on fourth-and-2 at the Chicago 28, and Robert Tonyan hauled in a 14-yard pass. The drive ended with Rodgers making an off-balance throw look easy when he delivered a dime to a leaping Lazard for a two-yard score.

Bears, fumble return touchdown: Upon having a lengthy third-down gain called back due to holding, Trubisky was strip sacked by Za'Darius Smith. Preston Smith recovered the fumble and returned 14 yards to the house.

Bears, touchdown: The Bears finally hit pay dirt late in the first half. With an impressive possession that featured multiple key receptions by Mooney, who made a diving catch for a first down, and Montgomery, as well as an 11-yard keeper by Trubisky, Chicago scored its first touchdown when Robinson caught a one-yard pass from Trubisky. Defensive pass interference in the end zone preceded the touchdown play.

Packers, end of half: A short carry ended the first half.

Bears, punt: On the first play from scrimmage out of halftime, Mooney recorded an 11-yard reception. Later in the possession, Trubisky was sacked on back-to-back snaps, forcing a punt.

Packers, punt: An 11-yard rush by Aaron Jones was followed by a nine-yard Jones run that was nullified due to offensive holding. The Packers wound up punting.

Bears, interception: A botched fake handoff resulted in a fumble by Trubisky that he was able to recover. Two plays later, Trubisky made a risky throw into triple coverage that was picked off. The pass was intended for Anthony Miller, but Savage snagged it in midair for his second interception of the night.

Packers, touchdown: Four plays following the turnover, Tonyan ran a route up the seam, and Rodgers found him for a 39-yard touchdown. The pass pushed Rodgers past 50,000 career passing yards. Earlier in the action, Adams surpassed the 500-receptions mark in his career.

TD for the TE!

Packers, touchdown: A tense moment came about due to a disconcerting injury suffered by Lazard, who was, thankfully, able to walk off the field under his own power. After being in on the play, Kyle Fuller began jawing back and forth with the Packers' sideline. The minor fracas dissolved once Lazard left the field, and play resumed. Equanimeous St. Brown nabbed a 24-yard reception, and Jamaal Williams was a workhorse on the ground throughout the drive, concluding with his 13-yard touchdown run.

Bears, touchdown: The Bears responded with a touchdown drive of their own. Trubisky completed several impressive passes en route to tossing a six-yard touchdown to Robinson.

.@AllenRobinson brings it home for the ?? time tonight.

Packers, punt: A 16-yard burst by Jones gave way to a punt a few minutes later.

Bears, touchdown: Jimmy Graham began the possession with a 16-yard catch. Riley Ridley came up with a 10-yard grab in Green Bay territory. After recovering a dropped snap, Trubisky completed a pass to Montgomery, which resulted in a nine-yard pickup. Montgomery went on to punch the football into the end zone on a three-yard touchdown reception. After that, Trubisky and Mooney teamed up for a successful two-point conversion attempt.

Packers, end of game: The Packers ran out the clock after converting on fourth-and-2 from the Chicago 39. Tonyan was again on the receiving end of a fourth-down pass from Rodgers. The eight-yard gain by Tonyan was followed closely by a 10-yard carry by Williams that moved the chains out of the two-minute warning and effectively wrapped up the contest.

Up Next: The Bears will aim to avoid extending their losing streak to six games when they compete against the Detroit Lions (4-7) in Week 13. In Week 1, Chicago pulled off a miraculous comeback to beat the Lions 27-23 on the road. On Sunday, Dec. 6, the Bears will host the Lions at Soldier Field in an NFC North showdown that is scheduled to begin at noon CST. The Chicago forecast calls for cold temperatures, moderate winds and partly cloudy skies.