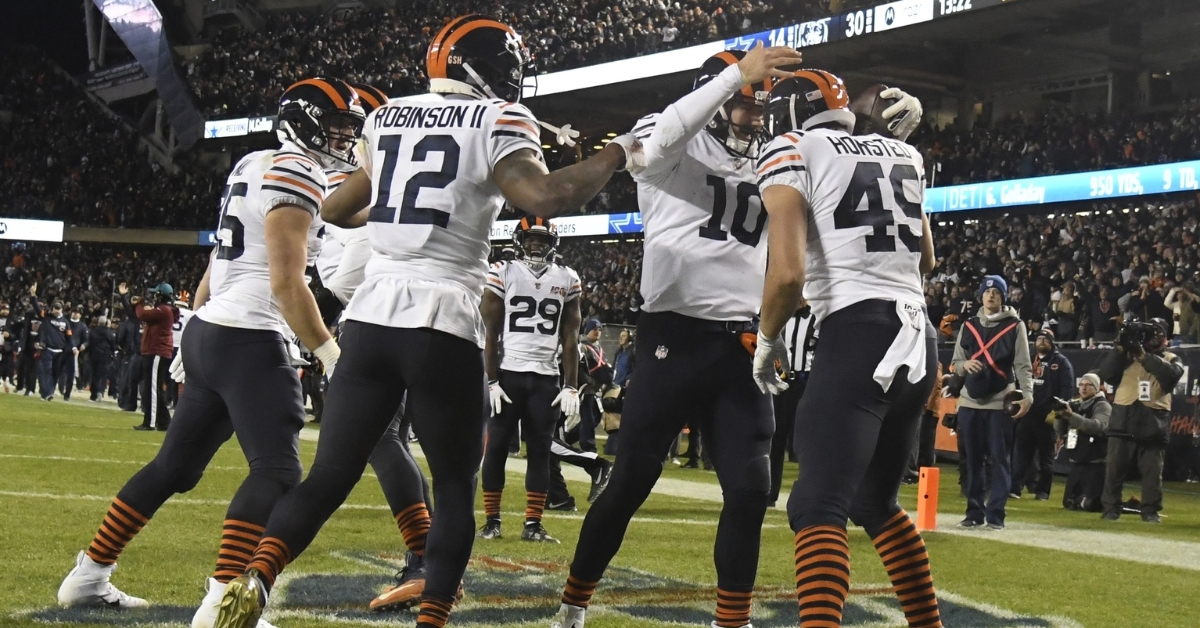 The NFL season begins TODAY! With all of the excitement that surrounds it, there is also questions regarding teams and their potential for 2020.

We at ChicagoBearsHQ.com thought this would be a great time to release our 2020 preseason Power Rankings ahead of the odd, mostly fanless 2020 season.

1. Chiefs - The reigning Super Bowl champions will remain at the top of our list until we have a reason to change. With Pat Mahomes under center and a formidable defense, this team could beat any team on any day. Clyde Edwards-Helaire is an intriguing rookie to watch, and this offense is special.

2. Ravens - Heading in to the post season last year, the Ravens appeared to be clear favorites to take the Lombardi Trophy to Baltimore. Lamar Jackson leads a high powered offense with one of the best defenses in the league — look out for the Ravens in 2020, they’ve got something to prove.

3. 49ers - The 49ers lost last season’s Super Bowl and a few important pieces, but still have a highly talented roster in one of the leagues toughest divisions. Returning the leaders and the staff will pay dividends for the 2020 49ers. Injuries have hit the 49ers hard over the offseason, but there is a reason they were nearly Super Bowl champs.

4. Saints - After losing in the postseason in heartbreaking fashion three years in a row, Drew Brees resigned with one goal in mind : a Lombardi Trophy. Adding Malcom Jenkins to the secondary and Emmanuel Sanders to an already high powered offense should bode well for the Saints.

5. Buccaneers - The Buccaneers have the largest improvement on our list because they have added six-time Super Bowl champion Tom Brady to quarterback an offense that had two of the top five receivers in the NFL a year ago. Oh yeah, and Rob Gronkowski signed there. Oh yeah, and Leonard Fournette. Plus they had one of the NFL’s best defenses in the second half last year. A lot of excitement in Tampa Bay for the year ahead.

6. Seahawks - When we last made these rankings, we were looking for Seattle to make a defensive splash. Well they traded for Jamaal Adams. Plus they have added Greg Olsen and Phillip Dorsett to aid Russell Wilson offensively. The defense still is a question mark, but the secondary now is not.

7. Cowboys - The Cowboys have an extremely talented team but have yet to be able to fully piece it all together. With Mike McCarthy now running things in Dallas and the Cowboys franchise tagging Dak Prescott and resigning Amari Cooper — the Cowboys are looking to put it all together this season. With Ezekiel Elliot in the backfield and weapons galore for Dak, look out.

8. Packers - The Packers quietly went 13-3 last season and return Aaron Rodgers in his second season in Matt Lafleur’s system — all things pointing in the right direction for Green Bay, despite their decision to not add to the WR room.

9. Bills - The AFC East is finally for the taking and the Bills are trying to avoid the fate of the 2017 Jaguars and 2018 Bears by riding their young quarterback and talented defense to the playoffs in back to back years. But this offense has gained Stefon Diggs, and the defense didn’t really lose anybody. Maybe the Patriots are finally dethroned.

10. Steelers - A healthy James Connor, Ju-Ju Smith-Schuster, Ben Roethlisberger and the addition of Eric Ebron to pair with what was one of the league’s top defenses should be a scary thought for the rest of the AFC — the Steelers are a team you should not sleep on.

11. Titans - A year after making the AFC Championship, the Titans look poised to take advantage of a division that has lacked a true contender. Tennessee was able to retain Ryan Tannehill and Derrick Henry, which was their bread and butter down the stretch. The Titans have a few defensive moves to go, but signing Jadeveon Clowney certainly helps.

12. Vikings - The talent of the Vikings roster has never been in question, but their ceiling withe Kirk Cousins under center has been. The Vikings impressed by beating the Saints in New Orleans last postseason, and despite losing a lot on the defensive side and offensive side; the Vikings are looking to make another run at the playoffs.

13. Colts - The Colts have upgraded the quarterback position with an aging Philip Rivers leaving San Diego / LA for the first time in his career. That mixed with a young defense, the best offensive line, and a talented offense — Rivers will lead what is a loaded roster to what Indianapolis hopes is a spot back in the postseason.

14. Eagles - Philadelphia has battled injuries for the past few seasons, as we all are awaiting what Carson Wentz can do with a fully healthy team. If this is the year, the Eagles could turn heads.

15. Patriots - 2020 will be the Patriot’s first crack at life without Tom Brady. While the AFC East does not appear to be loaded, this will be the most competitive the division will be in years. Cam Newton is under center leading this cast of nobodies — but if I have learned one thing in my time as a football fan, it is do not doubt Bill Belichick.

16. Texans - The Texans looked primed to contend for the division again, but they instead traded all-pro Deandre Hopkins to the Arizona Cardinals and got just David Johnson and a pick in return. What appears to be a historically awful trade leaves the Texans on the downfall. But with Desean Watson under center, anything can happen.

17. Falcons - The Falcons looked poised to have a good year in 2019, but underachieved. After adding Todd Gurley, Dante Fowler Jr., Hayden Hurts and Laquon Treadwell — the Falcons are looking to turn heads in a loaded NFC South.

18. Rams - The Rams struggled after their Super Bowl appearence, only going 9-7 in 2019. Now, the Rams have lost Todd Gurley, Dante Fowler Jr., Cory Littleton, Nickell Robel-Coleman and Clay Matthews. Expect the Rams to potentially take a step back in 2020.

19. Cardinals - In Kyler Murray’s rookie season, the Cardinals were able to win some impressive games. Take Kliff Kingsbury’s offense and add all-pro DeAndre Hopkins to it, while also adding to the defense — the Cardinals suddenly appear as a team that could go from last place to the playoffs in 2020.

20. Bears - The biggest problem the Bears have faced over the last few seasons has been having a quarterback that could put up enough points to support one of the NFC’s best defenses. The defense is still in tact, and Mitchell Trubisky has displayed enough improvement to earn the starting job, let’s see how it goes. If the Bears can get steady production from the QB, Club Dub could be open in 2020.

21. Broncos - The Broncos have quietly made solid additions to their team, both on defense and offense already this offseason. A.J. Bouye and Melvin Gordon are former pro bowlers joining Denver’s squad. If Lock turns out to be THE guy in Denver, the Broncos could compete in the AFC.

22. Raiders - The Raiders quietly almost made the playoffs last year, and have made five or six crucial acquisitions to their defense already this offseason. A solid draft has put the Raiders in primed position to make a run in 2020.

23. Chargers - With health, and a quarterback — the Chargers could shoot up our rankings. The defense was solid, and got even better with Chris Harris Jr. being added. The offense will all depend on the production of Tyrod Tayler and/or Justin Herbert. The Chargers are certainly a team to watch.

24. Browns - A roster that is loaded with both talent and question marks is the perfect way to describe Cleveland. If Baker Mayfield and the Browns can put it all together, they may be able to end Browns fans misery.

25. Panthers - There’s a new quarterback in Carolina, and his name is Teddy Bridgewater. The Panthers are in a bit of rebuild on the fly mode and they are hoping Bridgewater can keep them afloat.

26. Jets - The Jets had a tough season in 2019 and lost a few key pieces via free agency. With Sam Darnold looking to take the next step and the Jets looking to take advantage of a Tom Brady less division, the Jets will look to the draft and the next wave of free agency to improve their team.

27. Lions - A healthy Matt Stafford can lead the Lions to win any game — but the roster is simply not up to par to compete with the rest of the NFC. Rebuild now, win later is probably the best way for the Lions to operate.

28. Dolphins - The Dolphins have stocked up on picks over the last few seasons, and are looking toward the draft to turn the franchise around. The Phins have added Byron Jones and Kyle Van Noy to the defense and are on the up in the league. Tua won’t be starting initially but look out once he does.

29. Giants - The Giants are in the middle of rebuild mode, but seem to have found their running back and quarterback for the future in Saquon Barkley and Daniel Jones. However, there are just too many holes for the Giants to fill to be fully good in 2020.

30. Bengals - Can Joe Burrow save the Bengals? We’ll find out. Signig D.J. Reader and Trae Waynes certainly helps, and keeping A.J Green on the roster will be a nice target for Burrow - but there are still holes to fill for the Bengals.

31. Football Team - Washington added get top prospect Chase Young in the draft, and are looking to build around him and then Dwayne Haskins on the other side of the ball. If Haskins pans out, the Redskins are just a few years away from being back to prominence.

32. Jaguars - The Jaguars have struggled over the last few years and have done a bit of a sell out in the last few offseason. The Jags have committed to the rebuild and traded or released Calais Campbell, A.J. Bouye, Leonard Fournette, Jalen Ramsey and Nick Foles — and are far from a playoff team.