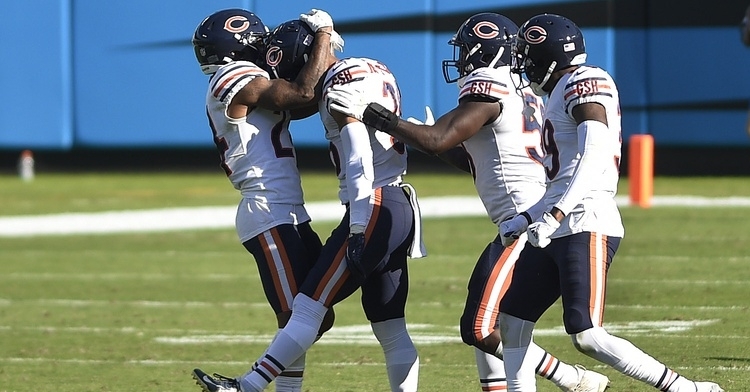 Another week has now come and gone in the NFL as we are past the halfway point. There have been injuries, comebacks, no fans (at least in most stadiums), and tons of fun in this crazy 2020 season.

At Bears HQ, we would love to deliver our Week 9 NFL Power Rankings after a fun and wild week 8. We decided to just explain the top 15.

1. Steelers 7-0 - Another win for the Steelers against an extremely talented Ravens team keeps Pittsburgh as the only undefeated team left. I think the Steelers are the most complete team and roster in the league, and they have a perfect record to show for it.

2. Chiefs 7-1 - The reigning Super Bowl champions have been dethroned from the top spot in our rankings. After a tough loss, the Chiefs have rattled off three dominating wins and look to be the cream of the crop in the AFC.

3. Seahawks 6-1 - Russell Willson and the Seahawks are back on track. Wilson has solidified himself as an MVP candidate with over 25 touchdowns through seven games, and the offense looks explosive through the first seven weeks. The Seahawks sit as the one seed in the NFC.

4. Buccaneers 6-2 - A team with tons of expectations is starting to live up to them. With all of the weapons this team has, they were able to claim the lead in the NFC South again with a narrow win over the Giants.

5. Ravens 5-2- The revenge tour took a tilt this week. Baltimore sits at 5-2 after a tough loss against the Steelers on Sunday. Lamar is back to using his legs, the defense looks scary, and the rest of the league should keep an eye on B-More as they look to get back on track this week.

6. Saints 5-2 - After losing in the postseason in heartbreaking fashion three years in a row, Drew Brees resigned with one goal in mind: a Lombardi Trophy. Despite lacking health, the Saints have rattled off four wins in a row and are looking to continue to build and get healthy in a tough NFC South. The Saints are quietly climbing our rankings and have a huge game against the Buccaneers on Sunday Night Football.

7. Packers 6-2 - The Packers quietly went 13-3 last season and started year 2 of the Matt Lafleur era with a bang and a 5-1 record to show for it. Rodgers and the Packers had put up 30 or more points four games in a row before playing the Buccaneers, but the Bucs blew them out. The Packers' unstoppable offense looked terrible last week, but they got back on track this week against Houston. The Packers won last night 34-17 against the 49ers.

8. Bills 6-2 - The AFC East is finally for the taking, and the Bills look primed to take it with a win over the scuffling Patriots. The offense has struggled since their hot start, but the Bills sit with a lead in the AFC East.

9. Titans 5-2 - A year after making the AFC Championship, the Titans look poised to take advantage of a division that has lacked a true contender. Tennessee retained Ryan Tannehill and Derrick Henry, which was their bread and butter down the stretch. After being down early against Pittsburgh, the Titans fought back and missed a field goal late to lose, but they fought. Tennessee then lost to Cincinnati, so they need to get back on track this week against Chicago.

11. Colts 5-2 - The Colts were in our initial top 15 heading into the year, but a loss at the Jaguars' hands dropped them out of it. The Colts have been up and down this year. They have had strong wins against the Bears and Vikings but bad losses against the Jaguars and Browns. Last week, a come from behind win over the Bengals and a big win over the Lions is enough to raise the Colts to 11.

12. Raiders 4-3 - The Raiders are quietly one of the most competitive teams in the league. They are well-coached and can run the ball and have been winners against the Saints, Chiefs, and Browns now in games they were underdogs in. Keep an eye on Las Vegas to turn some heads down the stretch.

13. Browns 5-3 - The Browns’ now sit at 5-3 after a tough loss to the Raiders. The Ravens and Steelers have beat up on them, but the Browns have looked good against anybody else but the Raiders. The Browns lost Odell Beckham Jr. for the year, but a strong 5-3 record keeps Cleveland in our top 15.

14. Dolphins 4-3 - Whether it's Ryan Fitzpatrick or Tua Tagovailoa, the Miami Dolphins continue to win games. The Dolphins are in every game and have destroyed the 49ers and the Rams now. The Dolphins have won three in a row after narrowly losing to Seattle. Do not sleep on the rebuilding Dolphins.

15. Rams 5-3 - In a year where the Rams were expected to take a step back after losing many pieces after last year, the Rams have turned heads in six weeks. The Rams have swept the NFC EAST and lost to the Bills and now 49ers so far, and after whooping the Bears, the Rams have solidified themselves as a contender in the NFC. Ehhh, not so fast. Miami destroyed LA this week. This team’s inconsistencies leave them just on the brink of our top 15.