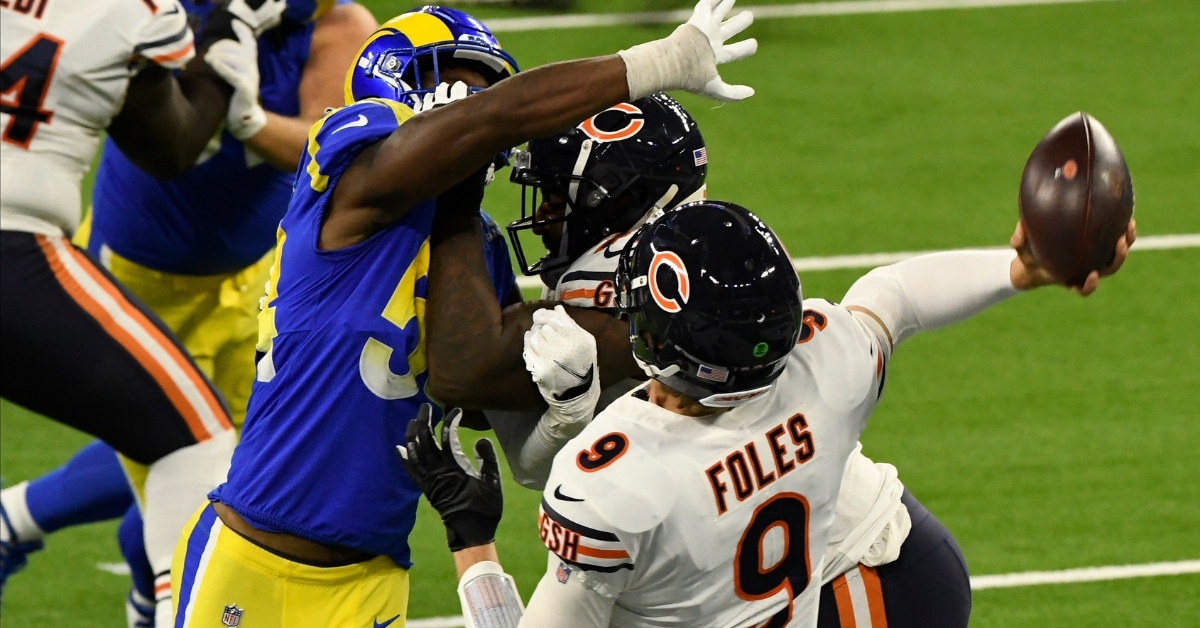 INGLEWOOD, Calif. — For the Chicago Bears (5-2) and quarterback Nick Foles, their comeback magic, which has been on display in several games this season, did not come to fruition in Week 7. Playing at the new SoFi Stadium for the first time, the Bears failed to score an offensive touchdown, and the Los Angeles Rams (5-2) won 24-10.

The final score of Monday's contest is not quite indicative of how the matchup progressed, as the Bears' lack of offense resulted in the Rams winning quite comfortably. Foles, a former Ram, struggled to hit his targets on downfield throws and was intercepted twice on the night. Chicago's lone touchdown came on a fourth-quarter scoop-and-score, and the Bears lost on the road for the first time in 2020.

Bears, punt: Cordarrelle Patterson returned the opening kickoff to the Bears' 30-yard line. Foles connected with Anthony Miller on third down and moved the chains. A holding call near midfield backed the Bears up and led to a punt a few plays later.

Rams, punt: The Rams quickly moved into Bears territory. However, on second-and-4 from the Chicago 39, a glaring misfire from Jared Goff to a wide-open target spoiled what should have been a first down for Los Angeles. Instead, the Rams punted after the Bears blew up the third-down passing play behind the line of scrimmage.

Bears, punt: Los Angeles forced a quick three-and-out after Chicago took over at at its own 7-yard line. Demetrius Harris allowed a pass to sail through his hands on second down, and a short gain by Patterson on a third-down pass out wide led to a punt. Nsimba Webster returned the punt to the Rams' 48-yard line.

Rams, touchdown: Jaylon Johnson broke up a deep ball thrown to Josh Reynolds on the first play of the drive. Goff then threw a pass to an open Gerald Everett that resulted in a gain of 16 yards. Akiem Hicks was flagged for illegal use of hands, which was declined, but he was arguably being held on the play. Van Jefferson then made a catch while falling out of bounds for a pickup of 14. The Rams' speedy drive was capped off by Reynolds catching a four-yard touchdown pass from Goff.

Bears, field goal: Cole Kmet started off the drive with a leaping 38-yard catch in tight coverage. He then collected seven yards on the ensuing pass. The Bears settled for a field goal on the drive, though, with Cairo Santos making a 42-yarder.

Big. Fast. STRONG!! @ColeKmet comes down with a 38 yard grab.

Rams, punt: Hicks got away with a facemask on Goff on the first snap of the possession, and Goff was flagged for intentional grounding on the play. Malcom Brown rushed for nine yards on the play after that, and Reynolds then hauled in an 18-yard pass. Brown reeled off another nine-yard carry on the play following Reynold's lengthy reception, and, on third down, Reynolds snagged a nine-yard pass, which was long enough for a first down. The Rams stalled out at the Chicago 40 and punted.

Bears, punt: Foles overthrew Mooney, who broke free in the secondary, but he then connected with Javon Wims on a short pass that initially moved the chains. The Rams challenged that Jalen Ramsey knocked Wims out of bounds short of the line to gain, and the first-down ruling was reversed. The Bears opted to go for it on fourth down, but a false start led to the punt team coming onto the field.

Rams, field goal: An end-around to Cooper Kupp resulted in a gain of 16. Johnny Mundt then broke a tackle and picked up 34 yards on a pass over the middle. The Bears' defense came up with a stop near the goal line, and Samuel Sloman kicked a 22-yard field goal.

Bears, punt: Allen Robinson hauled in a 14-yard pass. A few plays later, Foles teamed up with Mooney for a gain of 18. Foles was sacked on two of the next three snaps, including a sack by former Bear Leonard Floyd, and the Bears punted.

Rams, end of half: On third-and-4, Brown gained 13 yards on the ground. He gained six yards on the next third-down carry, and Bears Head Coach Matt Nagy opted to let the game clock expire, instead of using a timeout that would have forced a punt before halftime.

Rams, punt: On the second play from scrimmage in the third quarter, the Bears were flagged for two separate penalties. A roughing the passer call on Hicks was superseded by a pass interference call on Johnson, which moved the Rams to their own 43. Not long after that, an offensive offside call was then equalized by a neutral zone infraction called on Hicks mere moments later. Goff was strip sacked by Khalil Mack on third-and-short, though, but the Rams recovered the loose ball.

Bears, punt: Johnny Hekker, who was great all night long, pinned the Bears at their own 1-yard line with an excellent punt. The Bears went three-and-out and were lucky to avoid a holding call that went against them resulting in a safety. Harris was flagged just outside the end zone for the hold.

Rams, touchdown: After taking over near midfield, the Rams produced an efficient touchdown drive. Reynolds continued to show out with a 21-yard reception. Kupp picked up 10 yards on a catch to get the Rams into the red zone, and Eddie Jackson was injured on the play. Thankfully, Jackson was able to return the game. Brown attained 12 yards on a carry that saw him pushed several yards forward in a scrum. Hicks' battle with the referees continued, as he was flagged for unsportsmanlike conduct at the end of the play. From one yard out, Brown then punched the football into the end zone on a touchdown rush.

Bears, interception: A promising Bears drive was spoiled by a bad pass from Foles. Prior to that, Jimmy Graham corralled a 14-yard reception, and David Montgomery tabbed an 11-yard carry. Robinson drew a pass interference call that went against the Rams and advanced the Bears to the Los Angeles 15-yard line. Following a six-yard reception by Harris, Foles was intercepted on a pass to Mooney in the corner of the end zone. Troy Hill deflected the pass, and Taylor Rapp picked it off.

Rams, touchdown: The Rams converted the turnover into points. Darrell Henderson Jr. notched an 11-yard gain on a passing play. A jet sweep by Robert Woods resulted in a 25-yard pickup. Henderson gained 10 and 11 yards, respectively, on consecutive handoffs. Out of a Rams timeout, Goff threw a pass to Everett, who shed a tackle and coasted into the end zone for a 12-yard touchdown.

Bears, turnover on downs: On third-and-8, Miller made a stellar one-handed catch that was ruled incomplete at first. Nagy challenged the call, which was overturned, leading to fourth-and-1. The Bears went for it, and Patterson was leveled for a two-yard loss on a pitch play that did not work.

Rams, missed field goal: The Rams were flagged for offensive offside for the second time in the half. They had to settle for a field goal attempt after a three-and-out, and Roy Robertson-Harris blocked the kick, which fell well short of the goal post.

Bears, turnover on downs: For the first time in the contest, Foles succeeded with a deep ball, as Robinson made a 42-yard catch of a downfield heave. The Bears eventually faced fourth-and-goal from the 4-yard line and turned the ball over on downs for the second straight time. The Rams blitzed on fourth down, and Justin Hollins sacked Foles for a loss of eight.

.@NickFoles airs it out, @AllenRobinson makes the BIG PLAY!
THAT'S HOW YOU DO IT!

Rams, fumble return touchdown: The Rams took over at their own 12 with just over nine minutes remaining. The Bears were given new life when Woods fumbled on an end-around. Robert Quinn forced the fumble when he drilled Woods in the backfield, and Jackson picked the football up and ran it in for a touchdown. The eight-yard scoop-and-score marked the sixth career defensive touchdown for Jackson, which leads all active players.

Rams, punt: Chicago's defense continued to shine, forcing a three-and-out. However, Hekker came through with a brilliant 63-yard punt that was downed at the Bears' 6-yard line.

Bears, interception: On fourth-and-3 from their own 13, the Bears kept the drive alive, as Robinson gloved a six-yard catch. Unfortunately, Robinson was injured on the play and remained out for the remainder of the game with concussion-like symptoms. Two plays later, Goff overthrew Graham and was picked off by Ramsey near the sideline.

Rams, punt: Hicks sacked Goff on third down to force a punt, with the Bears using all three of their timeouts to make for a short possession.

Bears, turnover on downs: After yet another excellent punt by Hekker, the Bears began the drive at the 5. Mooney picked up 19 yards on a reception over the middle. Later, Floyd sacked Foles to bring up fourth-and-long, and an underthrown deep ball to Wims ended Foles' forgettable performance.

Rams, end of game: A couple of kneel-downs by Goff wrapped up the Rams' win.

Up Next: In Week 8, the Bears will return home to Chicago for a matchup with the New Orleans Saints (4-2). The affair is scheduled for 3:25 p.m. CST on Sunday, Nov. 1. The forecast at Soldier Field calls for mostly sunny skies, cool temperatures and somewhat windy conditions. New Orleans leads the all-time series versus Chicago 16-15 and previously defeated the Bears 36-25 in 2019.