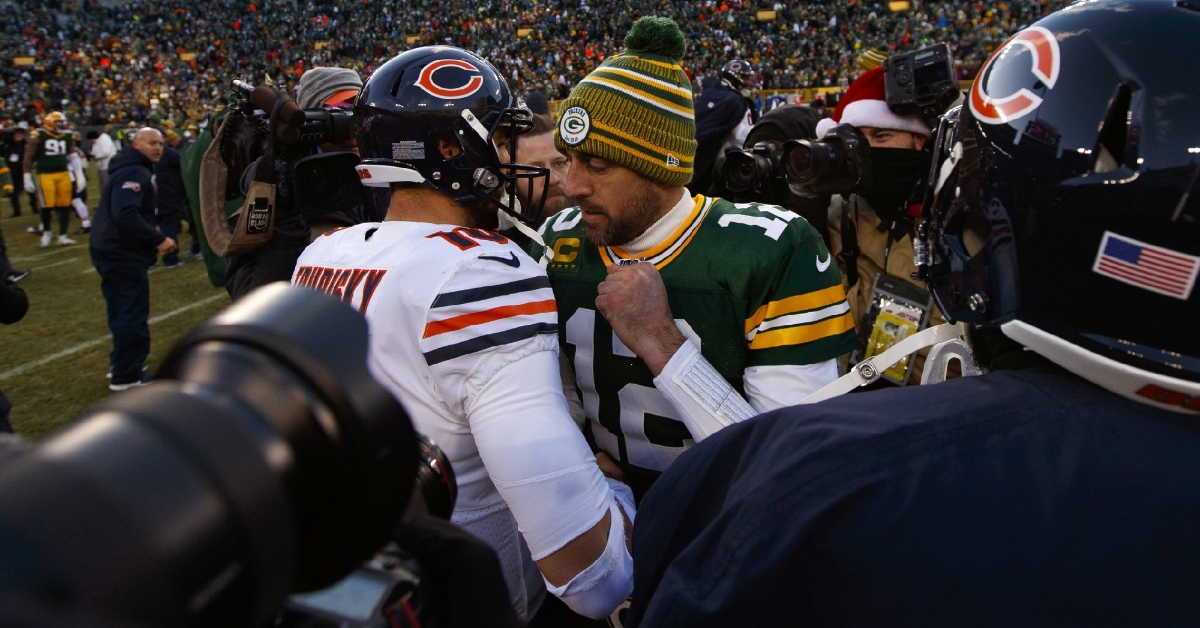 All good things must come to an end sometime, and for the Bears, a couple of hopeful things ended on Sunday against the Packers. Not only did Green Bay put an end to the Bears three-game winning streak 21-13, but any hopes of the playoffs for Chicago faded in the dust later when Minnesota ousted the Chargers out west 39-10.

Now sitting at 7-7, the Bears have nothing but pride to play for but could play spoiler for Minnesota in week 17 depending on what happens in their game against Green Bay in week 16 and whether the Rams can win out. That would be a nice consolation prize for a team that had postseason on their mind should they be able to spoil the postseason for a division rival. Here are some takeaways from Sunday’s gut-wrenching loss.

Sometimes, football is a game of inches, and for that, Bears that happened on a few occasions in the first half. Whether missing a wide-open Anthony Miller on the first possession of the game or having a horrible kick catch interference call lead to a Green Bay touchdown, the Bears had some chances to win, but couldn’t cash in on the opportunities they had.

That is something you cannot do against winning teams or teams already in the playoff mix if you expect to win. Much of the game, Chicago appeared very pedestrian on offense, and when they had a chance to do something, they were not able to capitalize. That included a third and five pass that went to Cordarrelle Patterson, which looked like a first down inside the five only to see he stepped out of bounds before making the catch. That led to another field goal instead of a possible touchdown as just one of the missed chances on the afternoon.

Outside of a very rough third quarter for Chicago, the Bears did a great job containing both Rodgers, and the Packers offense as Chicago managed to get the offense going in the fourth quarter. However, it was a little too late as the Bears ran out of time on their final drive having to settle for a miraculous play that fell three yards short of the endzone.

Why no field goals early on

Whatever the case may be, neither the Packers nor the Bears wanted anything to do with their kickers on Sunday as neither team wanted to attempt a field goal. Given the weather conditions, it may not have been easy, but at some point, you need to take the chance instead of going for it on fourth down all the time.

If you make the kick, it is three points for your team, and if you miss, the same result happens when you turn the ball over on downs, so what was the big deal early in the game. Eddy Pinero has been better than what the Bears had in Cody Parkey, but he still hasn’t been consistent enough to be trusted in key spots. Not to mention, he was struggling to make kicks beyond 45 yards in warmups, putting the Bears in a tight spot all game long.

At some point, you need to put trust in your kicker and give him the confidence that the coaching staff has his back. Who knows, maybe he would have surprised you by making a kick or two which could have affected how things went on the final drive of each half.

What happened on the last lateral:

With one play to go in the game, it was touchdown or bust for the Bears as their season was on the line. After settling for a 15-yard check down, the Bears began the laterals as they looked to keep the play alive. After fumbling the ball, Mitch Trubisky was able to recover and make something happen before pitching one last time.

With the ball inside the 10, Chicago had both Tarik Cohen and Allen Robinson wide open on the sidelines where they could have walked it into the endzone. Instead, a fumble inside the eight-yard line was the last gasp for the Bears as Tramon Williams recovered the ball for the Packers at the two-yard line sealing the Bears fate in 2019.

Look. How. Close. This. Was. pic.twitter.com/GHEWXlx7Hl

My question I have for all the Bears on the field, why did no one pounce on that ball or try to pick it up once it hit the ground. If you watch the video, once the ball landed on the turf, everyone stared at it and seemed to let it keep rolling instead of trying to pick it up and make something happen.

By NFL rules, if a player’s fumbles on a lateral, the only way Chicago could recover is if that same player recovered the ball. That had to be the reason Chicago stared at the ball, right? Because after watching the replay, the Bears did make a pitch, and it hit the Packers defender in the shin, which caused it to go forward. Is that why it was ruled a fumble?

Regardless of the rules or what Chicago was thinking, they needed to pounce on that ball and let the refs make the final decision in the end. After all, their season was on the line, and it proved to be the final play of their playoff hopes as the Packers managed to survive another late-game defensive meltdown.