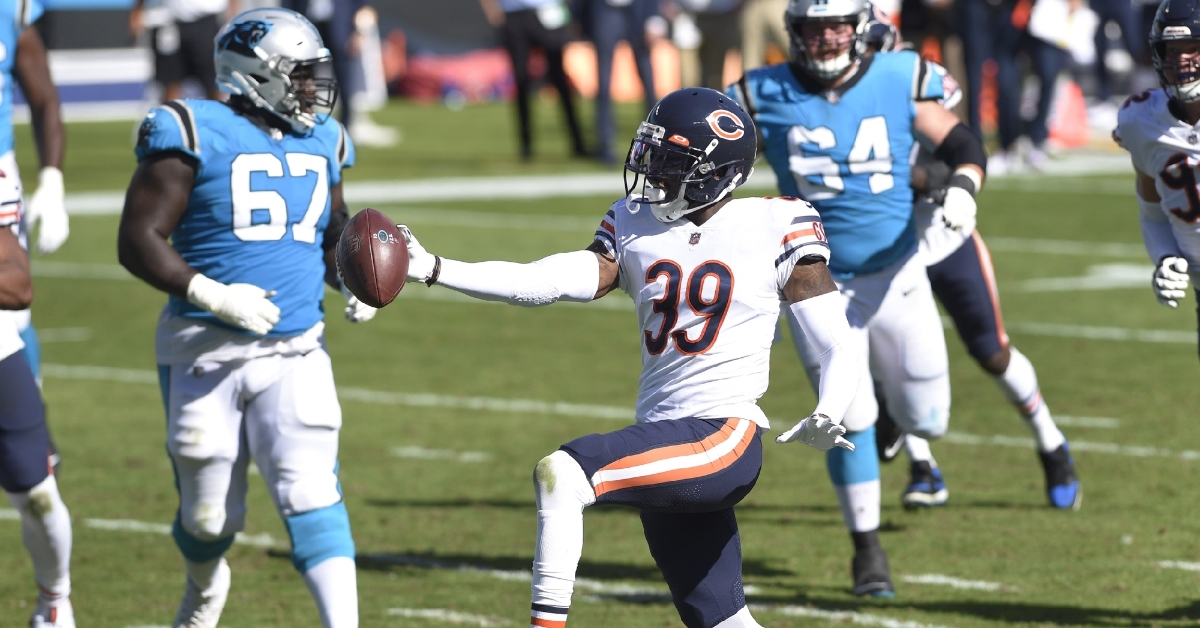 The Bears continue to play their style of football, and so far, it has paid off. Outside of their lone loss against Indianapolis, the Bears have turned winning Ugly into their new slogan as they don't care how they win as long as they win. Through six games, the Bears offense is doing just enough to get by, while their defense continues to set the tone and come through with huge stops.

That was once again the case on Sunday as the Bears and Panthers were locked into another tightly contested contest late. With Carolina driving for the tie, the Bears defense came away with one of their three turnovers on the afternoon to seal the deal as they improve to 5-1 after the 23-16 win over the Panthers.

Here are some takeaways from the win.

When the Bears took Kmet with their first pick in the NFL draft this spring, the object was to get him involved with this offense and make him a huge part. However, the learning curve from the College to the NFL hasn't been too kind as Kmet entered Sunday with just one catch through five games. Head Coach Matt Nagy has reiterated that Kmet needs to get more involved in the offense in recent weeks.

Sunday, we saw him get more involved, especially early in the game, when Nick Foles targeted him a lot. That included his first career touchdown reception to open the scoring following an interception by the Bears defense. Yesterday was certainly a step in the right direction for Kmet, and it appears he is starting to earn some trust from both Foles and Nagy. Hopefully, this is the type of game that can get him moving in the right direction.

The defense continues to come up huge

While the offense continues to be inconsistent at best, the defense is starting to play like the 2018 form of themselves. Through five games this season, the Bears defense has been in the top five in virtually every category. That includes the No. 2 defense on third down and the top defense in the red zone.

#Bears defense has allowed just 1 touchdown in each of last 3 games. Since Colts scored TD on first drive Oct. 4, Bears have held Colts, Buccaneers and Panthers to 2 TDs on 32 possessions.

The Bears often bend but not break as they hold teams to field goals instead of touchdowns. That tends to win you ball games if you keep the ball out of the endzone. Yesterday saw the Bears do something they are known for, and that is force turnovers. Not only did they intercept Teddy Bridgewater twice on the afternoon, but they forced three turnovers in total, which ultimately did the Panthers in.

This was precisely the type of defense the Bears were hoping for this season as fans saw what a great defense could do back in 2018. They may not be at that same level just yet, but they continue to get better each week. That is a scary thought to think about as they are 5-1 and have yet to play a complete 60-minute game this season.

The Bears win coupled with the Buccaneers demolition of the Packers has Chicago sitting on top of the NFC North. Through three games, both the Bears and Packers had identical 3-0 records until Chicago lost to the Colts. After playing catchup for two weeks, the Bears have now grabbed the top spot in the division once again, and it is the first time they occupy it by themselves.

It is October 19th, and your Chicago Bears are in first place ?? pic.twitter.com/80W4Oe9ONu

Not only are the Bears leading the North, but if the postseason were to start today, they would be holding down the No. 2 seed in the NFC. Not only that, but the Bears are also 3-0 on the road for the first time since 2006. We all know what happened that season as it was the last time they advanced to the Superbowl.

Yes, things haven't been the prettiest for the Bears thus far, but all that matters in the NFL are wins and losses. The Bears are finding ways to win games and have picked up two impressive wins in a row with another challenging task on the way. This was the portion of the schedule that looked to be the most challenging, and so far, the Bears have handled it well. Let's see if that can continue as this team appears to be actual contenders.