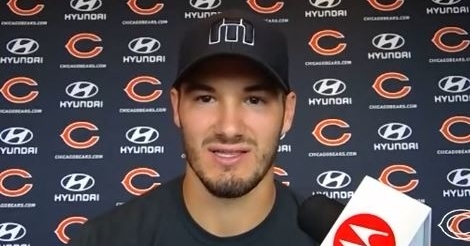 The Chicago Bears are having a true quarterback competition for the first time in several years with Mitch Trubisky and Nick Foles battling it out in camp.

Trubisky talked to the media Tuesday and said that he wants to do better this season.

"Being average is not acceptable around here," he said.

He went on to say that he wants to provide more leadership and emotion for his team in 2020.

"It’s a combination of everything," Trubisky said. "Just realizing this is the last year of my contract, being hurt last year and not playing up to my own expectations, going 8-8, having a quarterback competition, and just the desire to want to go out to continue to chase greatness. It’s a combination of all those things.

"I’m trying to bring that edge. You’re just playing each play like it’s your last."

Good for Trubisky to feel that sense of urgency because it is likely to be his last year in a Bears uniform if he doesn't produce this season.