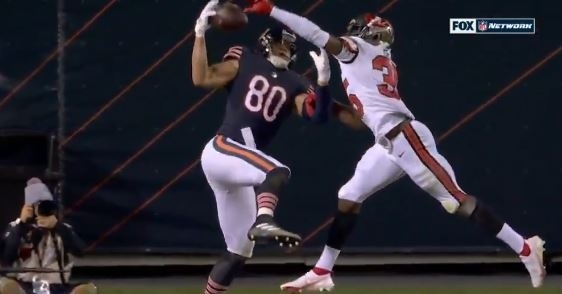 Jimmy Graham scored his fourth TD of the season

Veteran tight end Jimmy Graham has some plays left in the tank for the Bears.

During Thursday's contest against the New England Patriots in the second quarter, Graham caught an impressive one-handed touchdown against cornerback Jamel Dean to help tie up the game 13-13.

Graham has been solid in the redzone for the Bears through five games as he has registered four receiving touchdowns. In his two previous seasons with the Packers, he had a total of five touchdowns.

For his NFL career, Graham has 78 touchdowns which is only one short of Rob Gronkowski (79). The 78 receiving touchdowns is the second most by any NFL player (Gronkowski) since 2010.

Check out his one-handed touchdown below:

This was Jimmy Graham's 3rd down touchdown on a Go route in the red zone this season, most in the NFL. No other player has more than one.#TBvsCHI | Powered by @awscloud pic.twitter.com/xifkHGnr90