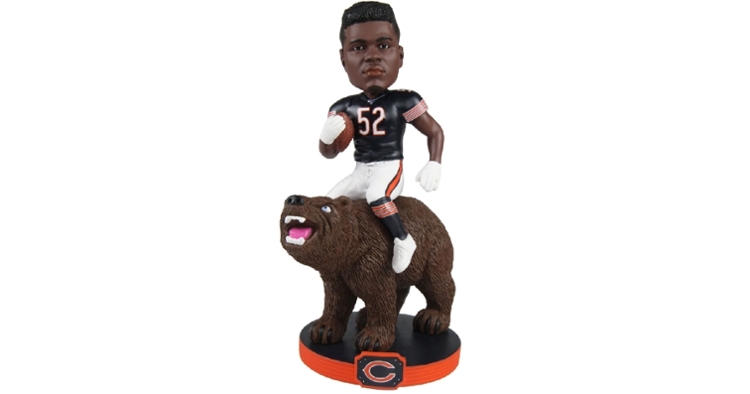 Wearing a Navy Blue No. 52 jersey, the stone-faced Mack bobblehead is holding a football and sitting atop an equally menacing grizzly bear who is flashing his teeth.

Each bobblehead is individually numbered to 2,019, and they are available through the National Bobblehead Hall of Fame and Museum’s Online Store. The bobbleheads just arrived and ship now, and orders placed by December 19th will be delivered before Christmas. The bobbleheads are $40, including a flat-rate shipping charge of $8 per order.

Widely regarded as one of the most dominant defensive players currently playing in the NFL, Mack is the only player in NFL history to be named first-team All-Pro at two different positions (defensive end and outside linebacker). Selected fifth overall by the Oakland Raiders in the 2014 NFL Draft, Mack was traded to the Chicago Bears prior to the 2018 season for two first-round draft picks. He also signed a six-year, $141 million extension, becoming the highest paid defensive player in NFL history.

"We’re always thinking of ideas for unique and fun new bobbleheads and the Player Riding Bobblehead Series certainly fits in that category,” National Bobblehead Hall of Fame and Museum co-founder and CEO Phil Sklar said. “I can’t think of a more intimidating bobblehead than Khalil Mack riding a grizzly bear.”