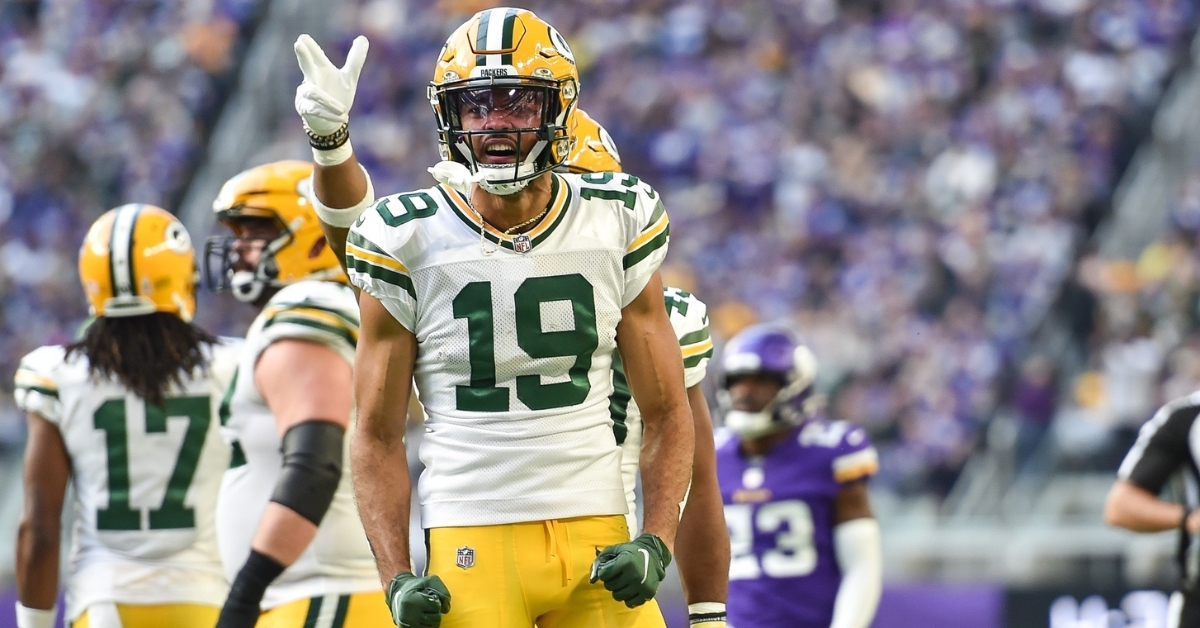 St. Brown has all the tools to be a solid player (Jeffrey Becker - USA Today Sports)

While the Cubs have recently stolen the spotlight with how active they have been, you also have the NFL and their current free agency period. While there have been several huge names coming and going, you could argue that the trade market has been just as exciting, if not more exciting. Add Davonte Adams to the Mix yesterday, and this NFL offseason has been wild.

For the Bears, things got started with a bang when Ryan Poles elected to part ways with Khalil Mack sending him to the Chargers for picks. The Bears then turned around and signed one of the better DTs in this year's FA class as they continued to address the needs on this team. Outside of that and the addition of Lucas Patrick to the OL, Chicago has been relatively quiet, but that doesn't mean they haven't been trying to add pieces.

Eventually, all that trying had to pay off, right? It appears that way as the Bears are closing on some offensive help for Justin Fields, with the Bears set to add another former Green Bay WR to their Mix. No, I am not talking about Marquez Valdes-Scantling, although he could still be an option later, but another WR full of potential, but never had an opportunity to show his potential.

That man is Equanimeous St. Brown, as the Bears are closing in on bringing him aboard. Already with Patrick and OC Luke Getsy in the building, things are starting to look a bit more Packerish around Chicago, which may not be a bad thing. Since being drafted by the Packers, St. Brown has been an interesting story, as he had all the tools to be a star.

The 25-year-old was a sixth-round pick by the Packers in 2018 and brings the ideal size and stature you look for in WR. His biggest issue was getting on the field, as injuries prevented him from consistently seeing the field. However, when he was on the field, St. Brown made plays, and now the Bears will allow him to make plenty of plays.

Looking at his four years, you will see minimal production, but that is to be expected when you can't see the field. St. Brown has 37 receptions for 543 yards and just one score for his career. However, a large chunk of his success came during his rooking year, which gives the Bears hope more is to come.

In that 2018 season, St. Brown had 31 catches for 328 yards. One year later, he suffered an ankle injury which kept him off the field all season, and that was followed by two straight years of next to nothing production-wise. Given that Getsy is the new OC and has worked with St. Brown before, you can see the connection and why the Bears wanted to sign him.

Fans shouldn't expect him to be the team's No. 1 option. Depending on how things shake out in the draft, he may not even be the No. 2 option. Regardless, St. Brown is a great depth piece to have that is still young and has plenty of potential left in him.

Even with his minimal production, much of that potential was shown during his rookie season when he saw the most action on the field. Going to a team like Chicago will give him a chance, but he will get consistent playing time if he can stay healthy. If that does happen, you could see a solid year out of him, and that is all the Bears would ask for at this point.