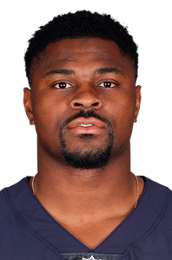 Outside Linebacker
B I O
PRO CAREER:

Led the team with 9.0 sacks on the year; recorded at least 1.0 sack in four straight games from Weeks 5-8
Sacked Texans QB Deshaun Watson in the end zone to log the Bears first safety since the season finale of 2019 at Minnesota by former LB Nick Kwiatkoski. Also, forced a fumble on Texans RB Duke Johnson in the first quarter in the Bears Week 14 win
Season-high 2.0 sacks for minus-14 yards in the Week 5 win over TB; also had three QBHs and one PD
Recorded 1.0 sack and 2 TFL in the Week 6 win at Carolina; also had 1.0 sack and a FF in Week 7 at the Rams
Recorded four tackles in the Week 1 win at Detroit
Recorded his first sack of the season in the Week 2 win over the Giants, dropping QB Daniel Jones for a loss of eight yards
Recorded 0.5 sack and two QBHs in the win at the Falcons
Recorded a strip-sack on Saints QB Drew Brees in the second quarter of the Week 8 matchup at Soldier Field
Intercepted Vikings QB Kirk Cousins in Week 10 and returned in 33-yards (career-long) which led to a Cairo Santos field goal

Voted to his fifth consecutive Pro Bowl after starting all 16 games for the fifth time in six years
Finished with a team-best 8.5 sacks, 14 QBH and five forced fumbles, which ranked fourth in the NFL
Recorded 4.5 sacks in Weeks 2-4 at Denver (1.0), at Washington (2.0) and vs. the Vikings (1.5)
Added 1.0 sack and two passes defensed vs. the Chargers
Also had 1.0 sack vs. the Giants and Chiefs

Selected to his fourth consecutive Pro Bowl; AP, PFWA and Sporting News All-Pro
Tied for the league lead with six forced fumbles
Recorded a team-high 12.5 sacks, good for sixth most in the NFL
Appeared in 14 games (13 starts), recording 47 tackles, 12.5 sacks, 11.0 tackles-for-loss, six forced fumbles, three passes defensed, two fumble recoveries and one interception (returned for a touchdown)
Turned in an impressive debut for the Bears at GB in Week 1, recording 1.0 sack for minus-12 yards, one INT for a TD, one pass defensed, one forced fumble and one fumble recovery; in doing so, he became the first player since 1982, when sacks became a statistic, to record a sack, a forced fumble, a fumble recovery, an INT and touchdown in one half (source: Elias Sports Bureau)
Named NFC Defensive Player of the Month (September)

Started all 16 games and totaled a career-high 87 tackles (65 solo) to go along with 10.5 sacks
Named to his third straight Pro Bowl
Led the Raiders in sacks for the third consecutive season
Was one of two defensive players in the NFL with 70+ tackles and 10+ sacks (Joey Bosa, LAC) and was the only defensive player in the NFL to tally at least 75 tackles, 10.0 sacks, five passes defensed, one forced fumble and one fumble recovery
Recorded nine tackles (seven) and posted a sack of QB Kirk Cousins, dropping him for a 9-yard loss in the first half at WAS
Totaled seven tackles and a season-high two sacks at Denver
Recorded four tackles, one sack, one FF and one FR vs. the Giants; late in the first half with the Giants driving, took down QB Geno Smith and simultaneously took the ball away from him, recording a forced fumble and fumble recovery on the play
Recorded six tackles and posted his second multi-sack contest of the year vs. Dallas

Started all 16 games and was named to his first Pro Bowl
Became the first player in NFL history to be named to the AP All-Pro First Team at two positions (DE & LB)
Finished second in the NFL with 15.0 sacks, falling just one sack short of the Raiders' franchise record
Posted 10 sacks over a four-game stretch from Weeks 12-15 and had four multiple-sack games
Credited with 79 tackles (58 solo), four passes defensed and two forced fumbles on the year
Named AFC Defensive Player of the Week after enjoying a career performance at Denver (12/13), tying the franchise record with five sacks, matching a mark set by Pro Football Hall of Famer Howie Long in 1983; all five sacks came in the second half
Posted second career two-sack game at CLE, getting to QB Josh McCown twice on a fourth-quarter series
Posted another standout performance, totaling eight tackles (seven) and two sacks vs. KC